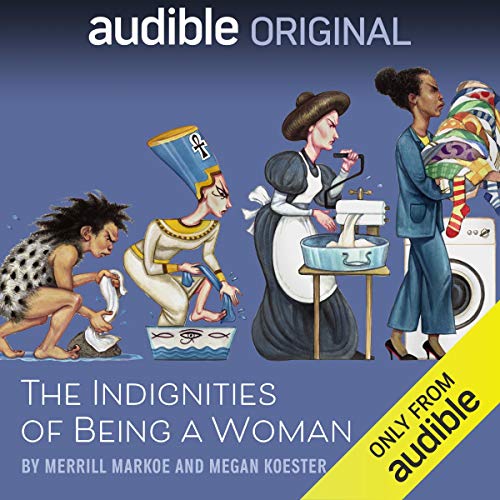 The Indignities of Being a Woman

It’s the 21st Century. Why the hell are women - 51% of the population - being treated like second class citizens?

The Indignities of Being a Woman candidly traces the history of womanhood and investigates how much things have really changed for womankind. By carefully x-raying areas such as body image, marriage, mental illness, fashion, and politics, this audiobook examines what it was like to be a woman in the past versus what it’s like now, when women are constantly told equality between the sexes exists but reality proves otherwise.

It’s the brainchild of two childless comedians, Merrill Markoe and Megan Koester. Markoe is a multi-award-winning comedy writer whose credits span television, magazines, and books. She has four Emmy Awards, one for each of her dogs. Koester has written for VICE, Jezebel and the Guardian and has one basic cable acting credit. The two writers—one a comedy veteran, the other an emerging talent—intersperse their dry wit with their own experiences of being long-suffering feminists in the modern world.

I really wanted to learn about the history of gender inequality and what it means to have been a woman in historical times, but quickly got tired of the political trump joke additions in places that were not even relevant to politics, if you weed through the narrator jokes and irrelevant commentary maybe you can listen to it.... Overall a painful and unfunny commentary peppered with a rare interesting fact

Not for,everyone..but I laughed A LOT!

If you don't at least have a feminist flag stored in your closet somewhere, if you are a Donald Trump fan and/or apologist; or if you are troubled by some pretty raunchy language..this may not be for you. I day "may not" because I detest bad language but I still laughed a lot as I listened. if you need a good laugh and some female comiseration, I highly recommend!

Hilarious history of people as seen through the eyes of the down trodden-us women!

For the 51% of the population whose job has been to procreate and do the laundry, this funny, insightful romp through history is payback for the macho male viewpoint we’ve all been force fed all of our lives. Enjoy, this is a treat. I personally would like to dedicate ‘The Indignities of Being A Woman,’ to my -ex husband, who would claim to have done the laundry but would have put his only clothes all the way through the wash and dry cycles leaving the rest of the laundry in the washer and dryer in various stages of completion. Well, he didn’t now where the sheets and towels went anyway. In a house with one small bathroom and one small linen closet, he would have had to figure out which shelf to put them on. Oh, and that would have required folding them before putting them in a shelf. You all know what I mean, cause we’ve all been there.

More snark and crudeness than comidity

One of my poorest selections I ever purchased, hoped that book would settle into a decent history of the treatment of woman and the achievements of woman through out the ages. Instead the book went on as a non stop rant of how woman have been degraded and abused by every man and woman that ever lived, without ever having a good thing happen to them or being treated fairly by anyone ever. If Fo-outrage at being a woman is your thing, that everything that ever happens to a woman is negative and abusive then this is a book for you. The humor was crude locker room jokes, and Internet troll remarks about successful woman in history. I made it through the entire book but had to sift through a lot of hateful crude comments and rants to find a few interesting historical facts. Truly can't recommend for anyone unless they want to be whiped into a blind hate filled rage over imagined injustices and slights by men and woman they never met, and imagined slights that only occurred in a self serving negative fantasy. If you believe the universe (all men and woman) hate you because you are a woman then this is the book for you.

I agree with some of the other listeners. I was interested in the history and facts and even some over-the-top stories but, I got tired of political snarky comments. The authors reading felt condescending and I began to believe this was much more about male/political/history bashing than retelling the historical facts. I tried to get through it all but by the end of chapter 2 I was done. This would have been great information and a fun book to listen to had they stuck to the topic and emphasized the positive progress women have made and how much they have overcome. I don't want politics (from either side of the spectrum) constantly shoved at me. I want history and interesting information.

I have been a long time fan of Merrill Markoe and her humor/writing. I grabbed this one as soon as I saw it.
The flow between Merrill Markoe and Megan Koester is really great. It makes this come across as a podcast where two buddies are just chatting about history and all the horror that comes with it, and I really enjoyed that.
This goes through a lot of disturbing truths about women's history but thankfully, it also makes you laugh at the same moment you are horrified. If you want to learn some things, be horrified, and laugh until it hurts...all in equal measure-use a credit and get this one. It's worth it.
Some interesting facts I learned:
-hardened plug of crocodile dung was used as birth control. how? listen to this audible original to find out.
-women's makeup used to blind them and many more horrible side effects...EVEN DEATH but they still used it.
-the term hysteria comes from the greek word for uterus and obviously hysteria only effected women.
I could continue with interesting and insane things that I learned in this book but I'll just let you go listen to it and find out for yourself.

Hate being a woman? If not read this book!

"If there's one thing I know about being a woman it's that the whole enchilada is GD depressing." Megan

I really wanted to like this book. I've read a lot of feminist type books over the years and it's always interesting to see how women have been portrayed. This book unfortunately can be summed up with ...do you hate being a woman? If not then you're not doing it right. It was just too aerobic to finish. The authors tried too hard to be snarky and witty but just came across as whiny and mean. Megan even goes so far as to state that capitalism is obviously a cancer. Wtf? Yes there are days when being a woman can be frustrating, but overall I enjoy being female and that's what separates me from the authors.

Let's start with the good. The narrators are quite entertaining. The acidic humor is always delivered with a wink. And now for the bad - it's very repetitive. They continually shoehorn Trump jokes throughout, which takes the whole audiobook from genuinely entertaining to cringe-inducing as a little goes a long way. "Here it comes. Yet another Trump/Russia/grab, etc. joke." In each chapter topic, they cover indignities women faced but never in significant detail. There is no time to stop and investigate the unfortunate roses on this speedy tour. Betty Friedan and Simone de Beauvoir are significantly better choices if you really want to dig into the indignities of being a woman.

Enough with the Trump Admin jokes. I knows he’s terrible, I just don’t need to be reminded about him at every break.
Otherwise pretty good content. Sometimes sounds like it wanted to be a podcast instead.

When I was in elementary school there was this book series called "Horrible Histories" and they had books on the Groovey Greeks, Rotten Romans and basically all the world empires. They used comedy in telling the myths and history and it was super fun to read.

This, is that series grown up. I loved the riffing between Merrill and Megan before and after the essays and I enjoyed the format of the book. It is a really fun listening experience.

The reason behind 4/5 is that you can listen to this with young listeners . Too much cursing and political jokes that'll go over their head. I do wish that they'd put out a version suitable for junior high age ladies because the content is great and want everyone to understand how history and culture all around the world have affected women.

made me sad about being a woman

It was an informative book, but didn't say "why" men came to dominate women. It was not like this for hunter gatherers, and I think we would be able to change the situation a whole lot easier, if we knew the reasons for this change of attitude towards women