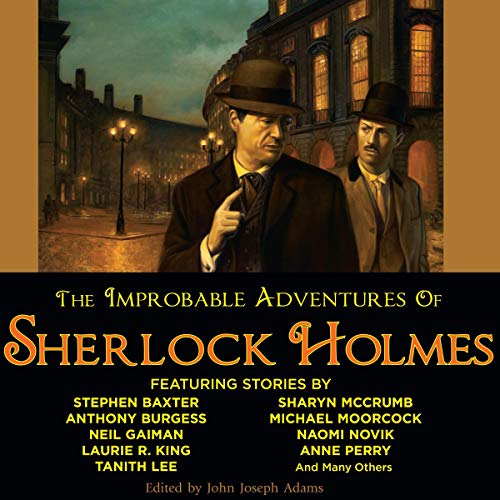 The Improbable Adventures of Sherlock Holmes

"For the most part, this volume of short Sherlock Holmes pastiches - a mix of straightforward imitations and parodies - delivers on its goal of presenting the best of such work from the last 30 years....Barbara Roden's "The Things That Shall Come Upon Them" riffs cleverly on M.R. James's "Casting the Runes". Perhaps the highlight is Peter Tremayne's "The Specter of Tullyfane Abbey", which offers a plausible explanation for a classic untold tale in which a man disappears from the face of the earth after returning home to fetch an umbrella." ( Publishers Weekly)

If you're precious about Doyle's works, I probably wouldn't recommend this. It does tend to lean more towards the speculative than the detective side. Then again it's a little strange in my opinion to be a staunch defender of the Holmesian canon when the author himself said to another writer "You may marry [Holmes], or murder or do what you like with him."

And these authors do. If you allow yourself more than your usual helping of willing suspension of disbelieve you will encounter terror, hilarity, shock, excitement and suspense. You will also discover (and this is an official spoiler alert) dinosaurs, pirates, Siamese twins, mummy's curses, Jack the Ripper, alien abductions, Lovecraftian horrors (a lot of these actually), alternate dimensions, ghost, ghouls, strange contraptions and some brilliant interpretations of the world's greatest consulting detective. We also get a slew of cameos from Doyle's work as well as the appearance of actual historical figures (including Doyle himself. Twice.)

I tended to dislike Anne Flosnik narrations but that could be because they pale in comparison to Simon Vance's renditions. His are genius.

The quality varies from author to author as you would expect, but there has to be at least one tale here that tickles your fancy. For all the ones I hated there were two I adored. I highly recommend this collection.

First, I must point out that I am not a die-hard Sherlock Holmes aficionado. I’ve read some of the stories, but not all, watched the TV series with Jeremy Brett, seen some other adaptations. I fall into that category of Holmes’s fans who can enjoy departures from the canon. (I even enjoyed the recent movie featuring Holmes.)

About the book, Simon Vance is (as I anticipated) brilliant. The other narrator was fine, but the reader who introduces the stories has an annoying voice; fortunately the introductions are short. The stories themselves are very respectful of Doyle’s characters. Frankly, given the number SF and fantasy writers, I expected to find Holmes in some very unusual territory. This was not the case. While there were a few stories I just couldn’t make it through, they were few and far between. (The notable stand-out for truly horrible story which did not respect the Holmes canon was the one by Sharyn McCrumb, who made her story about her characters and her themes with little respect for Holmes; I did not finish that one.)
Overall, I found that the number of stories I really enjoyed far outweighed the ones I just couldn’t endure. As a final thought, most of the “chapter” breaks are between stories, so it is easy to find the beginning of a new story.

They tried. They failed. Save your Audible credits for the real thing by Arthur Conan Doyle

A mixed bag: with agonising introductions!

I have to say, first off, that I found John Joseph Adams' introductions excruciating. Amiable fellow he may be, but I really don't enjoy being told what I'm about to think of something, or how many obscure SF awards a particular writer has received, and convenient chapters allowing the introductions to each piece to be easily skipped would have been a real plus from my perspective.

Simon Vance, on the other hand, is a consistently outstanding Watson, and where he is the narrator his efforts really help to lift the material; in some cases this is certainly required, as some stories fall well short of the original mark.

The tales are indeed a mixed bag, with many showing Science Fiction and Fantasy leanings, and some even outright Horror. Most manage to capture the 'Sherlockian' tone well enough, but some manage to combine 'dull' with 'faithful'.

However, there's more good than bad, and the collection as a whole constitutes agreeable entertainment.

While I prefer more straightforward detective narratives with the typical rationalist flavour of the original, I found Neil Gaiman's effort the most appealing, despite its reliance on the whole gamut of SF, Fantasy, and even Horror. I don't know that my namesake would have approved, but I'm sure that Gaiman has placed his two characters exactly where he would have wanted them to be in this nightmarish alternate past.

My recommendation? If you're a Holmes fan, and have enjoyed respectful pastiches such as Bert Coules' 'Further Adventures...' radio plays for the BBC, AND you have a credit to spare, I reckon you'll be happy enough!

You'll not forget these stories!

I'm coming back to write this review several months after finishing this book. The narration is superb in almost all places, and the stories by some of today's top writers are just stunning. I can truly say that now, many months after finishing the book, I find myself driving along in my car and suddenly unable to think about anything except one or another of these highly original and inventive tales. Even a knowledgeable Holmes fan will find fresh insights and weird alarums and diversions that you never could have imagined. Outstanding merger of a classic foundation and brilliant new imaginations.

As a lover of the Sherlock Holmes stories, I really enjoyed the unique approach offered in having Holmes solve these Sci-fi mysteries . The stories are well written and the editor (John Joseph Adams) does a fantastic job of maintaining the continuity of the narrating form used of Watson throughout the book.

Simon Vance is a great narrator and he does a particularly good job in his portrayal of all the English characters in this book, but especially Holmes and Watson. Very Entertaining in deed,.

Very good if you're not too dear about holmes

Let's face it, certain stories in this series are particularly non-canon. And there are even a few that are almost insulting in their cavalier creative lisence with the characters. However, even those stories I've mentioned above aren't without a certain amusement for someone who can take a little ribbing about being a Holmes fanatic. Just remember that not everyone is as reverant as a devoted fan and shouldn't have to be to enjoy spinning these characters into new stories that give us more chances to see them in action. As long as you're prepared to take this series of shorts as just that, a series of short stories and not an attempt to revamp or in any way challenge the Arthur Conan Doyle versions of our heroes, you'll find it, over all, a very satisfying listen.

If you enjoy "Holmes" then this is MUST reading/listening. IF you are not or have little exposure to Holmes, give it a try and I believe you will gain a new appreciation of thees beloved characters. The different authors takes on Holmes in each of these adventures is unique, refreshing and insightful, and true to his nature and that of Watson's as well. Narration is superb by Simon Vance and very good by Anne Flosnik who has the lighter share of the duties here. I canNOT recommend this highly enough!

not all of highest quality

there are some good stories here, of note are the Tanith Lee, the Burgess, even the Gaiman though I'm not normally a fan of his. And the very last story is a little classic in it's own right. But overall, though the authors may love Sherlock, I felt not many had the tone right nor the overall feel of Sherlock and so many left me disappointed or unimpressed. Take your chance, but I'd be tempted to listen to only the ones I mention, those I would listen to again, the others, not so much.

This turned out to be great fun! I bought it with reservations, because some "Sherlock by another author" books and stories are definitely not successes. But this is a great collection, generally respectful to the original but with much imagination thrown in. The narrators are wonderful.
Highly recommended when you're looking for something a little different - and something that comes in small, separate doses. Especially good for in the car!