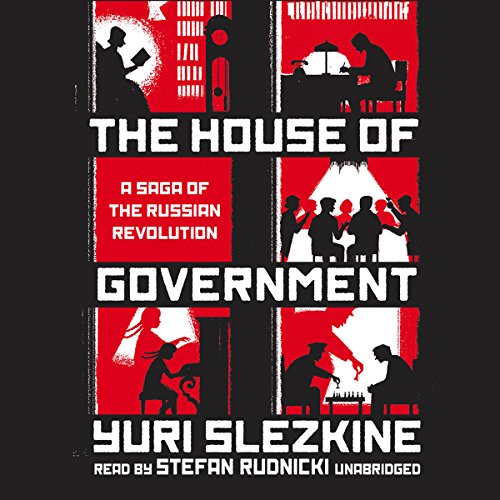 The House of Government

On the 100th anniversary of the Russian Revolution, the epic story of an enormous apartment building where Communist true believers lived before their destruction.

The House of Government is unlike any other book about the Russian Revolution and the Soviet experiment. Written in the tradition of Tolstoy's War and Peace, Grossman's Life and Fate, and Solzhenitsyn's The Gulag Archipelago, Yuri Slezkine's gripping narrative tells the true story of the residents of an enormous Moscow apartment building where top Communist officials and their families lived before they were destroyed in Stalin's purges. A vivid account of the personal and public lives of Bolshevik true believers, the book begins with their conversion to Communism and ends with their children's loss of faith and the fall of the Soviet Union.

Completed in 1931, The House of Government, later known as The House on the Embankment, was located across the Moscow River from the Kremlin. The largest residential building in Europe, it combined 505 furnished apartments with public spaces that included everything from a movie theater and a library to a tennis court and a shooting range. Slezkine tells the chilling story of how the building's residents lived in their apartments and ruled the Soviet state until some 800 of them were evicted from the house and led, one by one, to prison or their deaths.

Drawing on letters, diaries, and interviews, The House of Government weaves together biography, literary criticism, architectural history, and fascinating new theories of revolutions, millennial prophecies, and reigns of terror. The result is an unforgettable human saga of a building that, like the Soviet Union itself, became a haunted house, forever disturbed by the ghosts of the disappeared.

Inside saga of the leaders of Bolshevism & the USSR

What a generous & magisterial book! Basically the story of a wide group of leaders, intellectuals & senior bureaucrats and their families, most of whom lived at one time or other in the House of Govt. From the pre-revolutionary backgrounds thru the Oct Revolution, building the new Communist state, collectivization, the 5 year plans, the Great Terror & then the Great Patriotic War. This is s deep social, cultural & intellectual history of how a Bolshevik sect became the state religion of a great country, but it reads more like Tolstoy of “War & Peace”! Lots of Russian names & families to keep track of. Long, but fascinating, subtle, generous & sympathetic, but never “rose tinted”. Most highly recommended! Reader was easy to listen to, with the right balance of seriousness (& occasionally, irony).

Haunting tour of the temple of the failed deity

Engrossing relatable stories, often in their own words, of the thinkers who envisioned the Soviet state. Story after story illuminate the theories and ideals that led to the tragedy that followed.

fantastic portrait of the Soviet revolution

a masterpiece. sweeping and grand in scope. a must read for students of Russian/Soviet history.

The author is encyclopedic in the research, truly amazing. The narrator is wonderful and his voice is mesmerizing. I highly recommend this book, as I would not have read it as it is so long but listening made it compelling and fascinating.

Would you listen to The House of Government again? Why?

The history it presented, some of which I hadn't heard of.

Which character – as performed by Stefan Rudnicki – was your favorite?

All of them, not bad for a narrator I hadn't heard of before.

The fates of some of Stalin's "enemies" made me cry, Bukharin's especially.

/A must-have for fans of Soviet history.

Epic. Be patient and stay the course.

This is a historical narrative that demands patience. It starts out a bit obscure, and stays that way for the first 5-6 hours. Maybe a little longer. Then it starts to piece together. It’s captivating, engrossing, and extraordinary, once you get past the initial confusion. One thing that would be very helpful is a graph of some sort, as there are so many characters and overlapping storylines. It’s a generational saga, one not to be overlooked. But it will definitely require a second and 3rd listen!!

Stefan Rudnicki is a brilliant narrator, and perfect for the book, with his rich, textured voice. Perfection.

Not enough interpretation of history

It feels as though the author is presenting undigested biographical snippets while leaving their interpretation to readers -- something Solzhenitsyn explicitly frowned upon.

However, chapters 6-8 (if I recall) are still fascinating reflections on religion -- much as Gibbon's chapters on Christianity continue to be worth rereading long after taking in the entire decline and fall.

For the history fan...

Those who are interested in The history of the roots of Soviet Bolshevism, this is an expansive and fascinating look at the dynamics of the Soviet Union’s origins and development. Using the ambitious building of “The House of Government” building in Moscow as a lens, the author weaves social and biographical details into a terrific story.

A Powerful Argument, mired in minutiae

This is a deeply researched book about the moral and artistic underpinnings of the Russian Revolution. There are however so many long examples and so many people mentioned that it is daunting for the reader to keep it all in their head. However the arguments are so compelling that I’d still recommend the book but with the caution that there will be moments that the explanation of the plots of dozens of soviet era novels may be a slog.

A people's history of the Soviet Union.

I've been reading historical and biographical books on the Soviet Union since I became aware that there was such a thing as history, more than 45 years ago. Nothing I have ever read comes close to painting the day to day struggle of the Soviet people to not only survive but to avoid being exterminated or sent to dissappear in the Gulag.

Disturbingly, the author points out unmistakable simalarities in Western countries that while not as extreme as in the Soviet world, nevertheless destroyed the lives of hundreds of thousands of "free" and completely innocent people. A tale that should never cease to be told and most importantly, remembered.

Too much yellow press in the book´s first half

If you want to learn how the people felt and thought in the years of the early Soviet Union this book is a first class source. But the author ruins it with his endless lists of the affairs of the members of the russian nomenclatura: Who slept with whom, fathered or conceived a child, left his (her) partner over trivials and so on. So boring!
Without the wonderful reading by Stafan Rudnicki this part of the book would be just indigestable.
The main theme of the second half is the start of terror after the assasination of the Leningrad party leader Kirow. And this is very impressing. Yuri Slezkine cites extensively from diaries and letters and captures so the mood of these times first hand.