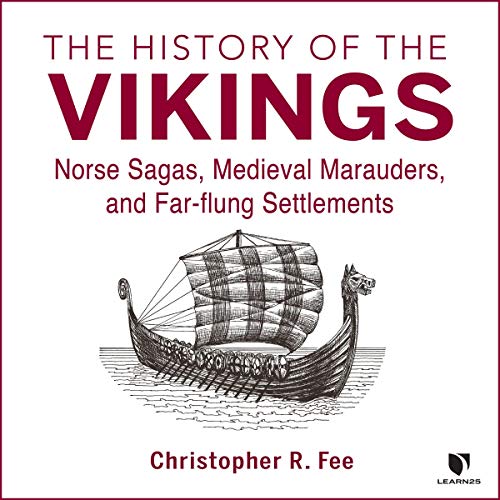 The History of the Vikings: Norse Sagas, Medieval Marauders, and Far-flung Settlements

The History of the Vikings: Norse Sagas, Medieval Marauders, and Far-flung Settlements

Frequently depicted as “Scandinavian scavengers,” warlike pirates, raiders, and invaders, the Vikings have lately surfaced from the depths of history to become pop culture’s most adored ruffians. For Prof. Fee, this recent craze for all-things Viking is a mixed blessing. The spike in popular fascination often occasions a need to separate the wheat from the chaff: fact from fiction, history from myth, literature from legend.

This 24-lecture audio series rights the ship by offering you a scholarly and comprehensive overview of Viking history, geography, literature, religion, and culture. Prof. Fee leads this series with canny and personable teaching.

As you meet the great Viking adventurers, you’ll explore pivotal events such as the raid on the monastery at Lindisfarne in 739 and the Norman invasion of Britain in 1066, as well as lesser-known curiosities: the etymology of the term “Viking,” the story of the Vikings known as Varangians who guarded the Byzantine Emperor, and the origins of the state that we now think of as Russia.

From runic inscriptions to heroic sagas, pagan belief to Danelaw, you’ll ponder the Vikings’ lasting significance as you immerse yourself in the seen and unseen record of their fascinating civilization.

This course is part of the Learn25 collection.

Good but not the best Viking lecture series out there

On audible, for those who like 30 min chunks of lectures on subjects you have a lot of choice when it come to the Norsemen. Two stand above this, Kenneth Harl’s “The Vikings” or Michael Drout “The Norsemen”, Those two give more compelling lectures with excellent lecturers