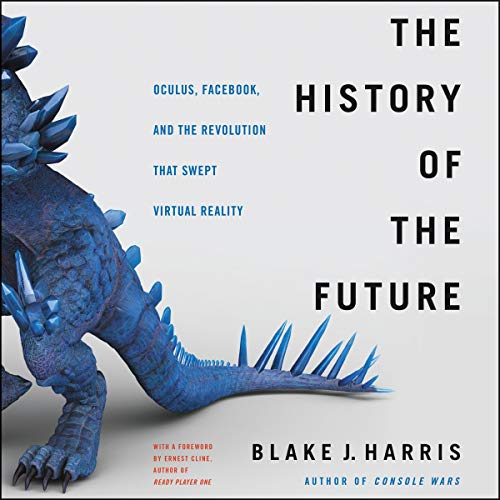 The History of the Future

The dramatic, larger-than-life true story behind the founding of Oculus and its quest for virtual reality, by the best-selling author of Console Wars.

From iconic books like Neuromancer to blockbuster films like The Matrix, virtual reality has long been hailed as the ultimate technology. But outside of a few research labs and military training facilities, this tantalizing vision of the future was nothing but science fiction. Until 2012, when Oculus founder Palmer Luckey - then just a rebellious teenage dreamer living alone in a camper trailer - invents a device that has the potential to change everything.

With the help of a video game legend, a serial entrepreneur, and many other colorful characters, Luckey’s scrappy start-up kick-starts a revolution and sets out to bring VR to the masses. As with most underdog stories, things don’t quite go according to plan. But what happens next turns out to be the ultimate entrepreneurial journey: a tale of battles won and lost, lessons learned, and never-ending twists and turns - including an unlikely multibillion-dollar acquisition by Facebook’s Mark Zuckerberg that shakes up the landscape in Silicon Valley and gives Oculus the chance to forever change our reality.

Drawing on more than 100 interviews with the key players driving this revolution, The History of the Future weaves together a rich, cinematic narrative that captures the breakthroughs, breakdowns, and human drama of trying to change the world. The result is a super accessible and supremely entertaining look at the birth of a game-changing new industry.

This is a fantastic and epic book, it talks about the origins of VR and how Palmer Luckey got into it and literally did create something special. It also covers how, in Silicon Valley, if you don't have the "right" politics, they will literally run you out of town and blackball you. It's an amazing story and told in an extremely interesting manner. If you've read Blake Harris' other book, Console Wars, this book is written sort of in that fashion but is a lot more realistic in terms of dialogue. While I enjoyed Console Wars a lot, the witty TV sitcom style of dialogue came off as not being believable at all - which is a must of a historical book. I get in Console Wars that it was dialogue from 30 years ago when it was written - so it's understandable people didn't remember exact phrases, etc. In this book, since it's much more recent, the dialogue is less witty - but much more believable - which in any book about real events and people is a positive.

Also I will note it's a shame how this book as been treated by places like Audible. Just search for Console Wars, which was certainly a hit, when you search for it and go to the page - they literally don't even include a link to this book - written by the same author in the same field of technology. Why is that Audible, why? I can't help but wonder.

The reader does a good job. Also to the dope who said the eastern European accent is 'racist', first off learn what the word racist means (hint: eastern Europe isn't a race), and second, the reason readers do accents is so you can keep track of who is speaking. It's remarkable how people don't get basic concepts like that.

Fantastic look into how Palmer Luckey brought us into the age of VR. Facebook sucks.

If any of the above keywords pique your interest, you will throughly enjoy this book. Well researched and well read, I binged this title in 2 days. I'm a VR enthusiast who only had a brief understanding of the story or Oculus and Palmer Luckey, this was a very compelling story. Highly recommended.

This is my new favorite book, not just tech or business. Great listen. Great performance.

Story of VR veers off course

I am a VR enthusiast and early adopter of the original Vive and Oculus. I have worked in the industry since then. So for me this was a fascinating well-researched story of how the current generation of VR was developed. I am the sort of audience that was familiar with all the hardware and software terms, understood their importance and recognized most of the companies and a handful of the names.

The first two thirds of the book I found completely compelling--Blake Harris provided a behind-the-scenes story the development of VR at Oculus, a serious and (I suppose) factual retelling of a Silicon Valley story. The deadlines, iterations, balancing act between businesses and academia, software and hardware, etc. are all well presented. During this part of the book the only weaknesses are a heavy focus on Oculus and a bit of starry-eyed treatment of Palmer Luckey. Most of the other key Oculus founders get somewhat fleshed out: Brenden Iribe, in particular. But Blake writes about Palmer like he's his defense attorney. In this book you'll hear the phrase "change the world" a bit too much to process it without skepticism.

The problem is in the last third of the book Blake leaves the story of VR just as it is getting interesting. We leave off as Zuckerberg introduces standalone VR (not phone-based). This will become the solution that provides mass appeal (with Go then Quest) and allows his closed software strategy to finally take off. But this isn't touched on. Rather Blake decides to focus on Palmer's support of Trump and his firing from Facebook. Frankly, I would have preferred no more than a paragraph assigned to this. Politics is just not something that most people reading the book (certainly not Americans) can digest neutrally and it's unwelcome.

Ironically, if you enjoyed in the minutiae of VR development--which Blake spends over half the book detailing--you would have preferred Blake's research and writing to have delved behind the scenes at Valve and Sony, both of who had managed to design their headsets so close to Oculus launch, rather than rehashing the 2016 election and internal politics at Facebook.

Always amazing to see how success begins, but terrifying to know how easy it can be taken away by those who simply disagree with you. If you ever need to see a modern day version of facism at work, look no further, than the leftist driven agenda of Facebook and their mantra"believe as we do, or you will cease to exist"

I heard this Author on the Glenn Beck program. Book aS wonderful and I recommend

Audio sample is a documentary account, the book itself is a fictional drama.
Just know this before you spend a credit.

I usually wouldn't take the time to trash a book, but I'm a bit ticked since I bought it based on Glen Beck's recommendation. I'm in chapter 5, hours of listening and we are still getting the blurry backstories of about 10 different people. I'm sure it will eventually make sense, but this book is boring! The first chapter held promise, but then it feels like someone's day to day activities being listed out - one at a time - with so many different names thrown out there that its untrackable.
I've got no idea why Glen Beck would have found this book even remotely interesting. Needless to say, I won't be joining his book club anytime soon.

The book provides a very detailed account of the beginnings of Occulus and its partners, and was insightful, even for professionals from the spatial computing industry. However, what starts out as an ode to Palmer Lucky's vision, turns into a lengthy justification of his political views and his association with alt-right institutions. The rhetoric, praising Trump, blaming Clinton and the 'fake media' and painting him as the misunderstood victim, who's been treated "so unfairly", feels hauntingly reminiscent of the president's tweets, and includes personal statements such as Brandon Iribe being "somebody dogs wouldn't like". Beyond his political views, painting him as an example of good ethics has to be put in stark contrast with his new company's (Anduriel) surveillance and millitary projects. I recommend reading the first 70% of the book for historical values and either skipping the rest or reading up on the court proceedings for the lawsuit with Zenimax and community comments from the VR industry, and creating your own informed opinion of this brilliant but questionable character.

Fascinating story of recent technology developments. We should be aware of how fast things are changing right now. Times have never been more challenging.