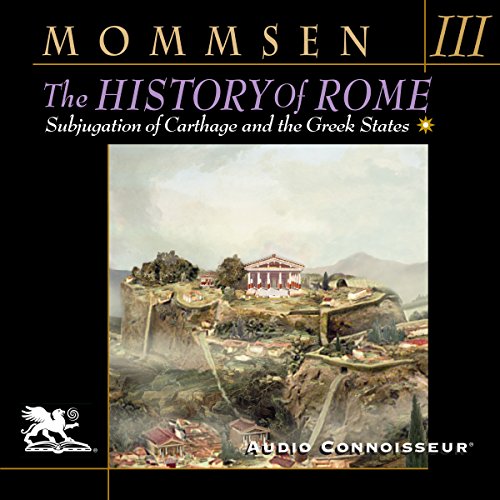 The History of Rome, Book 3

Book three of Mommsen's history covers the 118 years from 264 to 146 BC, the period in which Rome became the undisputed master of the Mediterranean Basin. How did this happen, and why?

Carthage was instrumental in this transformation. With the defeat and expulsion of Pyrrhus in 275 BC, Rome had moved to consolidate its hold over the Italian peninsula, a position it had acquired in a century of almost continuous warfare with Italian tribes. But only 11 years later, in 264 BC, the political and commercial rivalry with Carthage over control of Sicily broke out into open war. At the end of two brutal wars with Carthage and three with Macedonia and the Greek Seleucid and Antigonid Kingdoms, the Mediterranean lay in the power of Rome. It was not a power the Roman state had consciously sought. In its fanatical zeal for security, Rome subdued one adversary after the other with unerring determination. In the end there was no one left to subdue.

But along with that power came wealth and social changes that were to tear the republic apart. Mommsen's brilliant explanation for how this process of decay sapped the moral fiber of the Roman people is perhaps his most outstanding contribution to our understanding of this era.

This is the third in a five-volume series. This volume was recorded entirely on location in Rome, Italy. Listeners may notice some differences in sound compared to our usual studio recordings.

Although Mommsen used the AUC system of Roman years, which begins as the Roman year 1 (754 BC), we have transposed these dates to those of the Christian era. All dates are BC except where otherwise indicated.

We do not recommend Mommsen for those without a firm grasp of Roman republican history. The work of Cyril Robinson would be a great place to start for the neophyte historian.

It would depend on who the friend was and whether I wanted to keep him/her as a friend. It really needs a grounding in Roman History, as a fair number of the author's assumptions can be disputed by more recent historical analysis.

While I knew the broad outlines of Roman History, and even knew a few of the details I didn't realize the sheer scope of what was going on besides the war with Carthage during this time frame. Besides the three Punic wars, Rome established herself as the undisputed "naval" power of the Mediterranean basin, fought major and victorious campaigns in Spain, Southern France, the Adriatic and Greece, while extended the borders of Italy from the Po River to the base of the Alps, not too mention invading North Africa, all while containing Hannibal in southern Italy with what today we would call an "economy of force" strategy--the minimal force required to ensure he made no mischief with the Roman allied territories while becoming a noxious burden on his friends who shared his blockade.

Like all the older historians of Rome, he conflates the Senate with the Republic and vice versa. While indisputably a component of the Republic, it was arguably the least important. Also like almost every historian of the Roman Republic he waxes rapturous on Hannibal as a general, even while explaining that Hannibal started the Second Punic War in contravention to the express wishes of the Carthaginian leadership, that he lost 50% of his army crossing the Alps, that he made no provision for a siege train, that he was completely ignorant of the political realities extant in Italy, that he spent over half his time in Italy penned up in southern Italy, blockaded by land as well as by sea, while Rome went about conquering all the western Mediterranean and a large chunk of the Levant, all of which he was powerless to influence. Some general! Yeah he won some early battles against amateur generals that had no effect on the strategic balance and he was directly responsible for the destruction of his home country. Of course Romans had a vested interest in playing up Hannibal as "great" and worth adversary, after all, and the Romans admitted as much, there wasn't much honor in defeating a knave. On the other hand the sheer breathtaking scope of the various Roman endeavors really did relegate Hannibal to a footnote. Periodically Mommsen would check back to report that Hannibal was still contained, while the Roman Army was off to Macedonia. And then after relating that he was still checkmated, by the way, Rome just extended its Northern Boundaries. Yup, Hannibal's still in Italy, but look Scipio just conquered the Carthaginian province of Spain, but look he is tying up maybe 5% of the Roman Military. It that respect Mommsen's adoration of all things Hannibal was self-corrected, while the sheer scale of the Roman war effort, that was not to be equaled until America's entry into WWII, was made self-evident. Obviously Hannibal had no idea who or what he was messing with, and it must have been a bitter pill to realize his opponents had bigger fish to fry. Actually it wasn't until I read this book that it really crystallized my thinking about Hannibal's generalship, even though I'm sure the author didn't feel that way, and for that alone I would recommend the book, though its real value lies in the grand sweep of Roman History at this time.