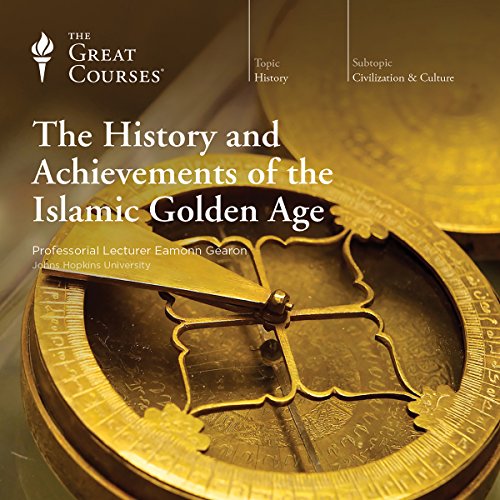 The History and Achievements of the Islamic Golden Age

The study of Western Civilization traditionally follows a well-known but incomplete arc: the grand achievements of Greece and Rome, several hundred years of the Dark Ages, and then the bright emergence of the European Renaissance. But amid the "dark" Middle Ages, the Abbasid Empire, which ruled the Middle East as well as much of Northern Africa and Central Asia from 750 to 1258, serves as a vitally important but often overlooked bridge between the ancient and modern worlds.

The History and Achievements of the Islamic Golden Age is your opportunity to get to know the story and the accomplishments of this great period in human civilization. Taught by acclaimed lecturer Eamonn Gearon, these 24 remarkable lectures offer brilliant insights into an era too often overlooked by traditional history textbooks. You'll meet a wealth of scholars, scientists, poets, and philosophers who paved the way for the Renaissance and continue to affect our world in surprising ways.

For instance, gain insights into:

It is nearly impossible to overstate the power and importance of this crucial 500-year history, headquartered in Baghdad but stretching around the world. While much of Europe was quietly passing the time, the Abbasid Empire was an international, multicultural hub of trade, travel, education, art, science, and much more.

You gotta get smart to see how dumb you are”.

At first, I hesitated to select this title. Maybe like you, the current situation in many Islamic countries shaded my expectations of what could have been achieved a millenia ago. Now I know. It was enormous.

What was one of the most memorable moments of The History and Achievements of the Islamic Golden Age?

The scope is ambitious but it manages to sparkle as well. I loved the many, small portraits of the thinkers. E.g. a wily scientist who feigned insanity to escape execution by his sponsor. Or a poet who extolled the delights of getting drunk – in an Islamic country. Human genius, human nature.

What does Professor Eamonn Gearon bring to the story that you wouldn’t experience if you just read the book?

I love the spoken word. To listen to a story told by a gifted storyteller is pure magic.

I deeply respect the work and dedication that went into it. This is a work that acknowledges the contribution of minds that have borne us further. But the author has labored in an area which has been deprived of both attention and public sympathy. This is true dedication and scholarship.

This book deserves a broad readership.

Learn but be have your own filter

Overall the book is informative and thoughtful, and thought provoking. I do have the following observations;

The speaker superimposes his early 21stcentury values on his assessment of completely different moral and ethical values. Its saying someone is good or bad because they are like me or different from me today, and that is irrational especially considering that many values tend to change from one generation.

In the lecture on Al Buckari, the presenter does not mentioned the methodology used to assess the strength of the Hadith. He does not state that a complete science is dedicated to assessing the trustworthiness of Hadith chains and transmitters called the Jarh and Tadil. The way it is portrayed now implies randomness and a high degree of uncertainty.

In one of the lectures the speaker mentions the term “wahabi” as a subcategory of Hanbali. This is a derogatory and baseless term fabricated in recent decades for reasons other than historical description, in simple terms it is primarily a segregation tool. Mohammed Ibn Abdulwahab did not develop a separate ideology or school of thought, he simply promoted the return to grassroots Islam, without superimposing later schools of thought. There are several other reasons why this term is in error, which for brevity will not be discussed here.

The assertion in the lecture on Al Bayruni that the Quran indicates that the Sun, moon, and other celestial objects revolve around the Earth. Where does it state so? There is not a single verse in the Quran that will contradict scientific fact.

The frequently stated driver for the Islamic Golden Age was stated to be a feeling of inferiority on the side of the Arabs. Again, what is the basis for this assertion? A feeling of inferiority does not sustain hundreds of years of scientific pursuits. A Muslim employs drivers other than just materialistic pursuits. With the belief that God created our existence, science to Muslims a  pathway to knowing God better, and being a stronger believer and way of getting perpetual good deeds through giving benefit to others.

In all I still think the lectures were beneficial and well worth the cost.

Nothing short of wonderful!

Professor Gearon is eloquent, entertaining, passionate and I dare say a polymath himself. He inspires love for the subject. What a pleasure to have such gifted professors!

Narrated with demonstrable enthusiasm and a rich,pleasing voice is this tremendous compendium of Islamic accomplishments over time.The breadth and depth of topics discussed is profound.As if representing the largest world-wide empire in history is not enough, Islam touched,molded,affected and explored everything in its' pathway.This encompassed areas from astronomy to medicine,from art forms to mathematics,from calligraphy to minarets leaving a mark on everything.Islamic influence stretched towards excellence.Of special intrigue was the establishment of Baghdad's House of Wisdom.This was the attempt to consolidate all known knowledge into Arabic.This seems in great contrast to today's devaluation of contemporary knowledge.This course expands the understanding of Islamic contribution and makes known characteristics of Islam more commendable than the patriarchy,terror and cruelty that often spring to mind today.This course also reminds us that religious wars are rooted in antiquity and teaches us of things lost and found between the battles.It is truly staggering in its' implications. I loved it!

Eamonn Gearon is an excellent lecturer; his passion and interest is infectious. The content of the lectures are informative, interesting, and very easy to listen to.

organized mainly by individual scholars lives, it would have benefited from a chronological tie in with other events during the period but otherwise a very informative and enjoyable survey of this important period of Islamic history and its intellectual leaders

Simply, entirely enjoyable, with a wonderful narrator. A narrator I enjoyed so much, I purchased another of his works......so off I go!
Cheers

The most well organized and well researched book

Of the many books on audible that I have downloaded and listened to, by far the best on this topic. The books on history are often hard to follow, unless narration is done well. But this was an outstanding price of work. The professor has done tremendous research and giving a very balanced view on the topic. I highly recommend this course for anyone.

Quite lomg, obviously but gives both a lust for more and satisfaction with what you got

4 hours in, and I've yet to hear history

This is the first great course I'm not going to finish. This course spends more time talking about Dr. Seuss and making bad puns then it does on history. It contains perhaps one or two mentions of Islamic culture, but it's mostly an egotistical rant about proper historical documentation and methodology.