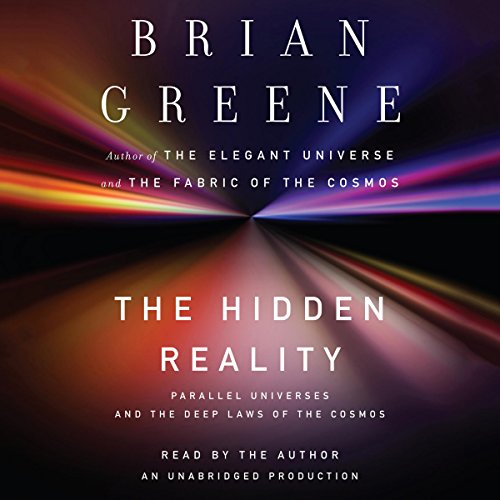 There was a time when “universe” meant all there is. Everything. Yet, in recent years discoveries in physics and cosmology have led a number of scientists to conclude that our universe may be one among many. With crystal-clear prose and inspired use of analogy, Brian Greene shows how a range of different “multiverse” proposals emerges from theories developed to explain the most refined observations of both subatomic particles and the dark depths of space: a multiverse in which you have an infinite number of doppelgängers, each reading this sentence in a distant universe; a multiverse comprising a vast ocean of bubble universes, of which ours is but one; a multiverse that endlessly cycles through time, or one that might be hovering millimeters away yet remains invisible; another in which every possibility allowed by quantum physics is brought to life. Or, perhaps strangest of all, a multiverse made purely of mathematics.

Greene, one of our foremost physicists and science writers, takes us on a captivating exploration of these parallel worlds and reveals how much of reality’s true nature may be deeply hidden within them.

This book & Greene's analogies connected Qs to As

This book brought not just answers to questions developed in my own mind, but also to questions my mind would have never generated. On more than one occasion the words which Greene was narrating brought not only understanding but joy and happiness to my being. Physics and math have never brought me as much overwhelming emotion as they did with this book, if anything they have been personal struggles for me. Yet through simple language and easily visualized analogies I have had my perceptions of reality and consciousness changed and expanded. Should & have & will continue to recommend this book and most likely his others.

Greene is a great writer, but not a great reader

I have read several physics books (including some written by Greene) so I have some background in the topic, but I am far from understanding it all. Greene does a very good job of making insanely complicated concepts (like multiple, folded, hidden dimensions) accessible to someone who doesn't have a Ph.D in math. He frequently uses real world analogies to bridge this gap, and even though the concepts are still daunting for a lay person, Greene makes them a little more accessible.

However, whatever his talents as a writer, Greene should leave it to professional readers to read his material. I found his voice and presentation very irritable, especially over the course of a long unabridged audio book. I almost stopped listening, it grated on me that much. Listen to a sample before downloading, and you may decide to read it instead of listening.

If you are considering this book, then odds are that you enjoy high-level science concepts translated to the educated lay listener. If that's the case: buy this book. Yes, there are points where the concepts are a bit byzantine and the lines between physics, cosmology, and metaphysics are a little blurry here, but those are aspects of the underlying science and not unique to this one book. I enjoyed it tremendously and will listen to it a second time. Narration is good.

I have yet to grow tired of Brian Greene's books. As with his other two books that I've read this is an exciting read. He amazes me with his great analogies and he never seems to repeat himself from his other books even when he talks about that the same subject matter. If you only have time to read one of his books, I would recommend this one. It takes you to the recently prevalent acceptance of possible explanations for the creation of our universe within a multi-universe. His books on science listens like a well written exciting science fiction novel. They are always fun listens. Soon as he publishes something else, I'll end up buying it. Can hardly wait for his next.

Would you consider the audio edition of The Hidden Reality to be better than the print version?

Highly recommend reading if only for the accepted pronunciation of various mathematical and science terms.

Provocative Book -- Some Crazy Ideas Too

I have long been a fan of Brian Greene and his skillful attempts to bring extremely difficult topics in physics within the general understanding of a non-mathematical audience. I thought both The Elegant Universe and The Fabric of the Cosmos were tour de forces of both lucid and entertaining writing, and both were rich with information not easy to absorb in another form or from another writer. Now along comes The Hidden Reality. Now we have Brian Greene tackling arguably a far less known or understood, and in many ways far-fetched topic: multiple universes. Is our universe the only one, or “all there is”, (i.e. the meaning of “universe”), or is everything we have ever observed or conceived of existing only one of a multitude (perhaps an infinite number) of such universes? By taking on such a topic in the first place, Greene is upping the ante quite a bit, even in comparison with discussions of topics like string theory.

At this point, I begin to take issue with his approach. I can see that Brian chose to “put out there” a panoply of wild ideas proposed by others, without passing judgment on whether they are right, wrong, or just plain ridiculous. In particular, I have problem believing that the “quantum multiverse” of Everett, the simulation multiverse or the everything (mathematical) multiverse are more than human-inspired fantasies.

I find the idea of a multiverse in general very appealing and reasonable, as I could never accept the “fact” that a single Big Bang, before which there was “nothing” started it all. Brane collisions or Big Bang like bubble formations within a much larger overall field of some sort make more sense. It makes sense that our universe is neither special as being the only one in time or in “the space of spaces”. But it’s going out on a limb to “know” that the landscape in which they exist is infinite in time or spatial dimensions. Greene has written a thoughtful and provocative book that will stimulate lively discussion.

I guess this book about met my expectations. Even though at times it seems much like a text book, there really was not the depth and dry fact delivery I would hope to find in such a tome. I have recently read through a couple other universe reality books both scientific and philosophical and think that although this avoids the philosophical pursuits does use many of the same processes to prove a point.

Great read...though only if you are into deep astrophysical topics.

this guy is a good writer. he brings all that science channel and history channel stuff into theoretical models i can actually follow

This book brings you up-to-date on the latest in cosmology theory. The author is clear enough for the non-scientist to follow most of what he's saying, without watering down the
complexities. Also, unless you have some kind of prejudice against people who accentuate the letter "s," you'll have no problem enjoying the author's narration of this book. I think most people will enjoy his reading.

Must read for the curious

If you are always trying to find out why, than this is a multi read. Can be a bit "WTF", but re-read, and a better understanding comes. Always keep in mind, that nobody knows.

Brain Greene gives the laymen the opportunity to glimpse into the latest physics developments. His explanations are clear, although I sometimes wonder why rudimentary explanations like the one on logarithms are required when every person who has an interest in such topics will not come completely devoid of any mathematics background. Also the undeniable passion in the authors and readers voice make the subject sometimes less believable as would have been by a professional neutral reader.

In spite of this minor critique, I really enjoyed the continued journey through string theory, the inflaton field and the many versions of the multiverse. A part from these insights, one phrase will certainly remain on my mind for the years to come: "we have to take the mathematical models more seriously". There is indeed many arguments to be made that the mathematical equations deliver more than their original use and that the results we seek in an equation could indeed come entangled with results we will observe in later experiments. Maybe I will need to read a third book by Brian Greene to convince me that the entanglement of results comprises all results of reality. A sort of: mathematics as the quantum theory of the physical reality. Sounds crazy, but all predictions turn out to be true.

Brilliant book for an introduction to Cosmology

One of the best book to get an basic idea about the space-time and fabric of the cosmos. Different multiverse theory's are brilliantly explained in this book. And most importantly Brian Green's narration is unbelievably perfect!