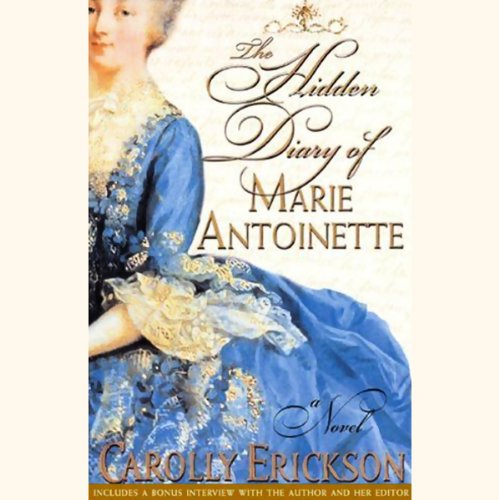 The Hidden Diary of Marie Antoinette

For more than two centuries Marie Antoinette has been vilified as the heartless, frivolous queen who spent lavishly while her people starved. Now, in the tradition of The Birth of Venus and The Other Boleyn Girl, this moving novel tells her side of the story.

Imagine that, on the night before she is to die under the blade of the guillotine, Marie Antoinette leaves behind in her prison cell a diary telling the story of her life - from her privileged childhood as Austrian Archduchess to her years as glamorous mistress of Versailles to the heartbreak of imprisonment and humiliation during the French Revolution.

Carolly Erickson takes us deep into the psyche of France's doomed queen: her love affair with handsome Swedish diplomat Count Axel Fersen, who risked his life to save her on the terrifying night the Parisian mob broke into her palace bedroom intent on murdering her and her family; her harrowing flight from France in disguise, her recapture and the grim months of harsh captivity; her agony when her beloved husband was guillotined and her beloved son was torn from her arms, never to be seen again.

Erickson brilliantly captures the queen's voice, her hopes, her dreads, her suffering. We follow, mesmerized, as she reveals every detail of her remarkable, eventful life, from her teenage years when she began keeping a diary to her final days when she awaited her own bloody appointment with the guillotine.

" "Erickson's lively account reveals a woman whose bravery and resilience seem as noteworthy as the bloody details of her demise." (Publishers Weekly)

This was a quick and easy read, but I really had to separate the story in my mind from the real Marie Antoinette.

Absolutely wonderful. After visiting Paris and seeing the palace and her countryside in person, I was very intrigued. This audiobook placed me back at the palace reliving the tragedy of her life as it unfolded chapter by chapter.

I can't wait to go back now and visit the palace again with a different set of eyes.

I wanted to love this book...

but I could not get into it. After reading/listening to Antonia Fraiser's book on the life of Marie Antoinette, I thought I would get a kick out of a fictional take on her life as queen, but found it too far from the truth for my liking.