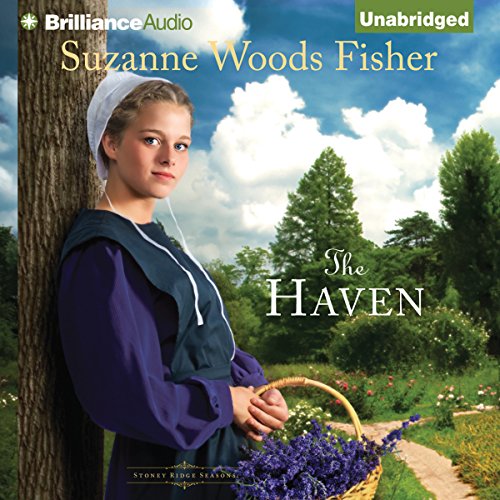 On a warm spring day, Sadie Lapp returns home to her quiet, unassertive life in Stoney Ridge after spending the winter in Ohio. Gideon Smucker, an awkward schoolteacher, has been in love with Sadie since childhood and eagerly awaits her return. But does Sadie feel the same about him?Will Stoltz, a charming and impetuous college student, has been banished for a semester and sent to babysit endangered peregrine falcons nesting at the Lapp farm. He’d rather be anywhere else...until he befriends Sadie. As the hopes and ambitions of these three young people converge, life in Stoney Ridge may never be the same.

Once again, best-selling author Suzanne Woods Fisher intrigues and delights with a story that explores the bonds of friendship, family, and true love in this captivating series.

"A heartwarming story of faith, family, and renewal filled with characters that come alive on the page like old friends, The Haven will captivate fans of Amish fiction and readers who love an endearing romance." (Amy Clipston, best-selling author of the Kauffman Amish Bakery Series)
" The Haven is a warm, touching novel about the power of familial bonds. Once you dip into this novel set in the charming town created by Suzanne Woods Fisher, you’ll be hooked.” (Beth Wiseman, best-selling author of the Daughters of the Promise Series)

This is a cute story. The foundation of the theme is not entirely plausible, but if you go with it, it's enjoyable.

This is a good clean drama. Well written and read. Something the family can enjoy.

Lessons in Life, Grace and Healing

The second book in the Stoney Ridge series finds the Lapp family still mourning the deaths of Menno who died in a horrible accident, and their mother/wife . . . with Stern Fern keeping the home fires burning at the Lapp home, M.K. still busy with her crazy antics, and Sadie home from her visit with her sister, life seems to be moving along . . . except that Amos, with his new heart, Menno's heart, doesn't seem to be himself . . . and Sadie has brought home a baby . . . and the whole Amish community is a buzz about it . . . seems that even the plain people love to talk . . . even Gideon, Sadie's beau and the local school teacher, assumes the worst . . . which pushes Sadie toward the newcomer and Englisher, Will Stoltz, who has come to mind the nesting falcons . . . a lot is happening at Stoney Ridge farms . . . unassuming Sadie, who has never liked attention and preferred a quiet existence, has come home to quite a stir, Menno's bird watching skills have been recognized far and wide . . . Sadie's newly acquired healing arts are more and more in demand . . . the quiet faith and grace of the Amish shines through in the lives of each of the families depicted . . . I love their individual personalities, as varied as the colors of the rainbow . . . Uncle Hank, M.K., Sadie, Gideon, Fern, Amos . . . and Will . . . all faced with choices . . . and the Holy Spirit, guiding each . . . wonderful story . . . can't wait for the next in the series . . .