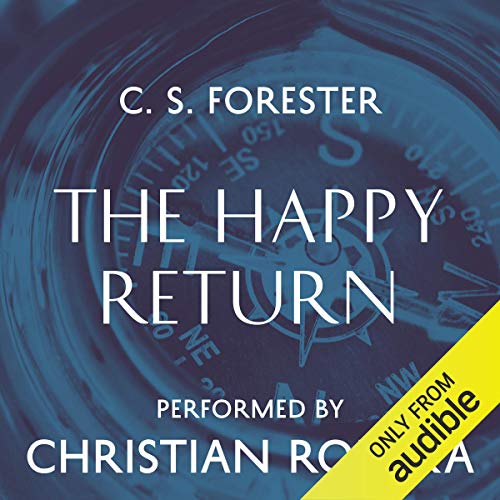 The year is 1808 and somewhere off the coast of Nicaragua, C.S. Forester's hero returns, ready to embark on his next swashbuckling adventure.

The fifth instalment in the series, The Happy Return follows Captain Horatio Hornblower as he commands the thirty-six-gun frigate, HMS Lydia. Sent out on a mission to weaken the colonial Spanish government, Horatio must form an alliance with a narcissistic revolutionary leader with delusions of grandeur, who goes by the name of 'El Supremo'.

Simultaneously faced with an advancing Spanish fleet and their far superior fifty-gun ship, Natividad, Horatio must find a way to 'take, sink, burn or destroy' his enemies or fail and be made to face the British courts. Adding insult to injury, Horatio is furthermore challenged by the arrival of a singularly attractive passenger, the influential Lady Barbara Wellesley. Vulnerable, alone and seeking passage to England, Horatio cannot refuse the lady, but as a happily married man, he finds himself tortured by Barbara's tempting nature and astounding beauty.

An English novelist, C.S. Forester was highly praised by his contemporaries for his Napoleonic naval warfare series, and later for the publication of The African Queen.

Despite his natural ability and endless imagination, Forester came to writing much later than expected. Having originally studied medicine at Guy's Hospital, it was only after his travels with the Royal Navy that he was artistically inspired, developing in particular, a fervent love of story-telling. Sadly stricken with arteriosclerosis whilst voyaging to the Bering Sea, C.S. Forester was crippled in his later life, but his imagination and his skill with a pen survived for years to come.

Christian Rodska is an English television and voice actor best known for his role in the 1970s series Follyfoot.

From The Monuments Men and The Eagle of the Ninth to The Likely Lads, Z Cars, The Tomorrow People, Coronation Street, Bergerac and Casualty, his extensive and diverse acting career has led him to become a highly solicited radio and audiobook narrator.

AKA "Beat to Quarters"

"The Happy Return," also known as "Beat to Quarters," is the first-published (1937) adventure of Captain Horatio Hornblower, RN. It was followed in 1938 by "Ship of the Line" and "Flying Colours." Later books, published after WWII, went backward to cover Hornblower's early career, and forward to his rise to admiral and the peerage. "Midshipman Hornblower," chronologically the first story, was published in 1950.

Having listened to all the Aubrey/Maturin books and feeling bummed that there were no more left to hear, I decided to try this book, since I knew it sailed similar seas (British navy during the Napoleonic Wars). This first Hornblower adventure does not disappoint. The distant, all-powerful captain with extraordinary navigational skills and an almost uncanny connection to his ship (there's a reason ships are thought of as female), sailing under sealed orders to a dangerous assignment in a faraway and exotic (in this case the Pacific coasts of Nicaragua and Panama) locale; encounters with the enemy won sometimes by guile, sometimes by superior seamanship, and always by sheer guts; unimaginable pain and privation, encounters with stunning cruelty--it's all here, guys and gals! There's even a shipboard romance.

What is not here, unfortunately for his fans, is any character even remotely resembling Stephen Maturin. As it is, Hornblower is limited largely to conversations with himself, we don"t get to see the Central American volcanoes through Stephen's naturalist eyes, or get his spy's-eye view of the intrigue. This "criticism" is unfair to Forester, however, and shouldn't deter anyone from enjoying these earlier books, which undoubtedly influenced O'Brian.

I have enjoyed both Simon Vance's and Patrick Tull's approaches to narration of the O'Brian books. Christian Rodska never gets as ponderous as Tull or as exuberant as Vance, but reads with clarity and energy. I particularly enjoyed his Spanish accents. All in all, this one's worth the listen.

Where does The Happy Return rank among all the audiobooks you’ve listened to so far?

As good as the best, maybe better.

Everything except that it ended. Fortunately, there is another in the series which takes up where this one leaves off.

Have you listened to any of Christian Rodska’s other performances before? How does this one compare?

I have listened to his other Hornblower narrations, and this is as good as the others, which are great.

In the battle with the Natividad, when the crew cheered for "Hornie" as he berated and threatened them.

Lovers of historical adventure novels and just plain first class writing should start with Midshipman Horblower and get on board for one of the best reads in the English language. Churchill and Hemingway were big Hornblower fans. Find out why.

Christian Rodska did a wonderful job narrating the story. Hornblower sails to central America and a secret mission. Forester description of the land and people brought a picture to my mind as if I was watching a movie. Forester's battle scenes are almost as good as Patrick O'Brian. It is hard enought to fight another ship without having to worry about the wind in the sails and directions you can sail. This was the first book in the series and I am looking forward to reading more in this series. I understand Forester has written many book such as African Queen that became movies. I shall see what Audible has of Forester's books.

Finally the naval novel I've been waiting for...

If you could sum up The Happy Return in three words, what would they be?

Hornblower is my favorite character. He is so self critical he doesn't know he is an awesome sea captain.

I like Rodska's reading style. He has an easy to understand British accent and read the book at a pace which matched the story.

If you could take any character from The Happy Return out to dinner, who would it be and why?

Hornblower of course. I guess I would have to do all the talking though since all he would do is harumph!

A lot of people compare Hornblower to Aubrey/Maturin. Hornblower is much more to my liking. The Happy Return has lots of action and moves at a brisk pace as opposed to the 3 Aubrey/Maturin novels I have listened to which I found to be long and slow reads.

First but not foremost

Don't start the Hornblower books with this one, the first that Forester wrote. Hornblower here is sketched in, self-absorbed, and slightly annoying; the Lady Barbara romance is off-kilter. Start with the great Midshipman Hornblower, a much more enjoyable book, and let this one come in its chronological sequence. Not bad, just not representative of the best of this series.

Enjoyed it even more than the first time!

What did you love best about The Happy Return?

I haven't read any Hornblowers since the 1970s, but I like naval adventures in general and remembered liking them very much, so I wanted to read them again. I chose this one because it was the first written. I know most people prefer to read series in chronological order, but I always find a series more accessible in the order written.
The Happy Return did not disappoint me. I enjoyed it tremendously. The performance was all right - my only real beef with it is some very bizarre and distracting mispronunciations.

I always appreciate a book like this one, since I get more exercise and housework done when I'm motivated to continue listening. I wouldn't want to listen to it all in one sitting - too long - but it was absolutely a pleasure.

Great writer, good story. Not as good as the later books when Hornblower is young.

The great Hornblower read by the great Rodska. Awesome book and it’s worth every penny.

The audiobook cuts out nowhere near the end of the actual book. This is the abridged book.

Found an original first edition set of these that had belonged to my grandfather while home from college in 1974. Started reading, been hooked ever since.