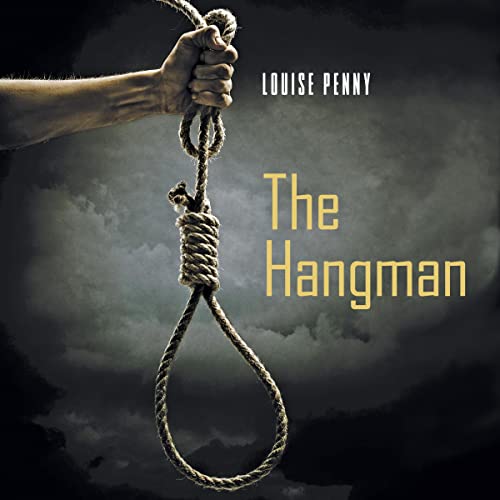 On a cold November morning, a jogger runs through the woods in the peaceful Quebec village of Three Pines. On his run, he finds a dead man hanging from a tree. The dead man was a guest at the local Inn and Spa. He might have been looking for peace and quiet, but something else found him. Something horrible. Did the man take his own life? Or was he murdered?

Chief Inspector Armand Gamache is called to the crime scene. As Gamache follows the trail of clues, he opens a door into the past. And he learns the true reason why the man came to Three Pines.

This is a short audiobook for people on the go.

I have enjoyed Louise Penney since I listened to her first mystery. It has been ffun to see her characters in these earlier years in Three Pines. Really I was so tickled to discover them the mystery kind of faded into the background until
the big reveal towards the end. And, it is a careful unwinding of the layers here that do prove to be a good book.

This should be noted as a short story, very dissatisfied Beware, read it all before wasting a credit!

I wasted time I’ll never get back.

Over the past year I’ve purchased and listened to all of the Gamache novels. I consider them a good investment as I received great joy in reading them. This thing however!
One, bad on me that I didn’t read the reviews to know it is not a novel. I got excited and just jumped in when I saw a new Gamache offering.
Two, I didn’t read that it’s supposedly written for emergent readers. Not pleasant reading.
Three, I wish someone had warned me that it’s just a bad story.
I’m a fan Ms Penny, but this seems to be written by emerging writers in a workshop.
For me, the beauty of the Gamache series is the wonderful detail and how each novel folds effortlessly into the next.
I’m longing for that kind of work. Please give us another extension soon.

Different for a reason

If you begin this book and are distracted by the thought, “Something is not quite what I have come to expect, here,” know that it was written by Louise Penny as part of an initiative for adult “emergent readers”.*

That’s why it’s an adult themed story written at an emerging fluency level. So for readers of the Inspector Gamache series, it reads differently—the words and sentence structures are simplified, the chapters (and the book) is shorter. What’s lovely about The Hangman is that in employing an elegant simplicity and precision tailored to this audience of readers, Louise Penny’s unique and signature eloquence is ever-present.

* this specific type of initiative seeks to provide materials for quite a range of adult readers; adults learning a language, persons re-learning a language (in recovery from a stroke or brain injury, for example), adults with genetic chromosomal abnormalities, et. al., so their reading options aren’t limited to children’s books. So buying and enjoying this book also enables us to be part of a wonderful literacy initiative that has inspired other, similar projects.

I love that the Inspector Gamache characters may be introduced to adult emergent readers with this book. It’s a testament to Louise Penny’s talent as a writer that, while simplifying her structural style, the essential complexity and grace of the characters remains luminous.

Too late, after spending my credit, I discovered vignette means shortstory. It is narrated by someone different so that was a bit of a jarring, getting used to. By now we all know what each character with repeat appearances is “supposed” to sound like, although I cannot fault the new performer in any way. I suspected it would be a smallish novel. It was a good story and I would very much have appreciated it 100%, had it been placed in a book of short stories. In fact, I had been wishing Ms Penny would write a book of short stories because I listen at bedtime, and fall asleep trying to get to end of chapter. That way I could set a slot of time to spend reading In what ch I would get to the end at a planned time, better, and not have to screen back to find the place my mind gave up the ghost & I remember nothing past that point.

On the whole, I really enjoy her works. I like that one not need follow the order written. I love the descriptions of the beauties and dangers of the areas. I love the detective and that there is a naturalness of his wife being included some times, getting a picture of him within a family & relationship. I like getting to know the history of both the area, familiarly within the specific area, and the history of the area..the actual history of Quebec/Montreal and between anglos & french, the architecture to a small degree, and of the police system, including those out of the 3 pines area. I find not enough clues within the mysteries, though, & often the murderer comes out of left field. Of course one wants to have some mystery in who-done-it, but I often do not find any clues leading to the actual murderer, within the game, making it NOT a game at all. This story was a great size for perhaps 3 or more stories in one book. Although the story was good, having wasted a credit on something so short felt like almost a swindle.

I will continue to finish Ms Penny’s series, though, and also check out the one she co-wrote with Hillary Clinton. I’m saving that for last because I anticipate enjoying it, albeit likely without all the beautiful descriptions of Canada, assuming it’s set here in the US. Pollution, crime, the drawbacks to living in city/suburbs isn’t something I look forward to hearing about since novels are our escape from such hard facts of life. Hillary, I hope will give insights of what her life was like in all the intriguing roles she has played, including being a very astute politician, as well as mother & wife & woman. It’s got me quite excited, but like Christmas, I don’t open presents until it is time to.

This book was more like a short story. Expecting a longer book for a long drive! Felt like a wasted book credit.

Hmmm, I think this brief story is a bit disorienting for those of us who read Louise Penny. Because it was written back in 2010, but is narrated by the new guy. It's set in a time before Gamache moved to Three Pines, so it feels kind of weird and out of place. At the same time I don't think the story in itself is intriguing enough for those new to Louise Penny to make them want to take up her regular books.

So, it was okay, but considering how popular and successful her books are, this story feels like a bit of a throw away that maybe should not have been published.

Ridiculously short. Not worth the cost

It was over so fast I felt completely duped I think I’m done with Louise Penny.