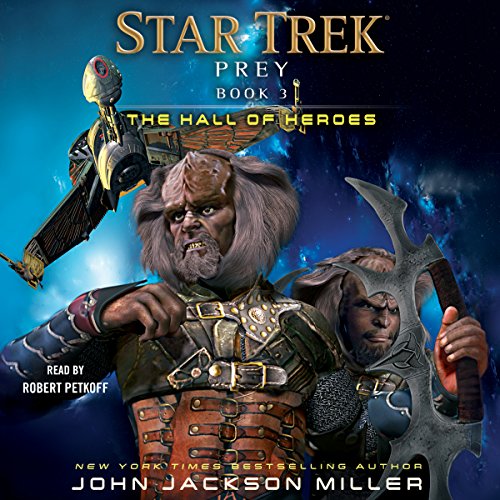 The Hall of Heroes

Continuing the milestone 50th anniversary celebration of Star Trek - an epic new trilogy that stretches from the events of The Original Series movie The Search for Spock to The Next Generation!

The Klingon Empire stands on the precipice. In the wake of violence from the cult known as the Unsung, paranoia threatens to break Chancellor Martok's regime. Klingons increasingly call for a stronger hand to take control...one that Lord Korgh, master manipulator, is only too willing to offer.

But other forces are now in motion. Assisted by a wily agent, the empire's enemies secretly conspire to take full advantage of the situation. Aboard the USS Titan, Admiral William T. Riker realizes far more than the Federation's alliance with the Klingons is in danger. With the empire a wounded animal, it could become either an attacker - or a target.

Yet even as hostilities increase, Commander Worf returns to the USS Enterprise and Captain Jean-Luc Picard with a daring plan of his own. The preservation of both the empire and the Federation alliance may hinge on an improbable savior leading a most unlikely force....

what a fantastic story!

this story part 3 in the trilogy has been a fantastic listen. From the moment I listen to book one I was hooked into this entire storyline. The author has done a great job of expanding characters and plot and also summarizing it at the end of book three.

The narration is top-notch. and no time was I ever bored I'm listening and the narrator did bring the story to life.

I highly recommend this three books series and can't wait to listen to another series by the same author.

great ending to this trilogy

A great three book series. Star trek at its best. A good listen. Get it

Excellent conclusion to this series!

I have listened to this 3 part series a number of times and I always enjoy it. I strongly recommend this to any Star Trek fan or anyone that appreciates sci-fi/action.

this star trek book series was well worth the credit . i recommend the whole series starting at book 1

Enjoyed all three books; love just enough of the series and the mix of timelines with great new additions and tremendous detail. Thank you...

the end of a Klingon saga

Held my attention to the end of the trilogy. interesting tie in to Star Trek 3 : The search for Spock

Satisfying conclusion to the trilogy, featuring the return of Ardra, now working for Starfleet. Everything is wrapped up, without killing off the villains (sequels!). My biggest complaints about the trilogy are that it sometimes dragged on and didn't feature any DS9 or Voyager people other than Tuvok and Ezri. For that matter, we barely saw Crusher and Troi!

Great conclusion to the Prey Trilogy

well written and well researched, surprise twists and turns, enjoyable concluding episode and series as a whole. it may be helpful to read about the take down incident first, although not required to enjoy or understand the story.

The Hall of Heroes

Robert Petkoff always does of great job. This one was the best of the trilogy. Liked that it got into more of Klingon life and more of the mysterious Breen. The ending was great .