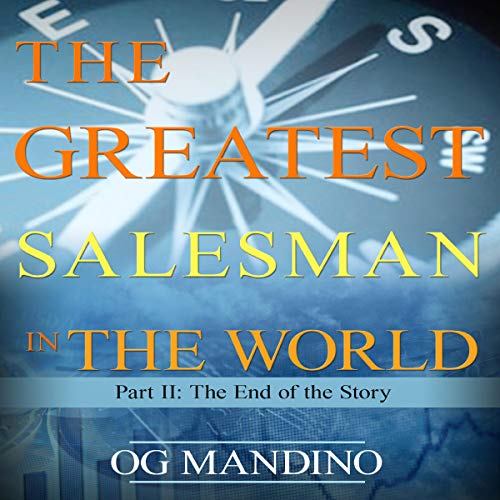 The Greatest Salesman in the World, Part II: The End of the Story

“The most important book of our generation.... A flawless, priceless masterpiece.” (Denis Waitley, author of Seeds of Greatness)

You are holding in your hands an almost impossible dream finally becoming reality...the sequel to the inspirational classical that has touched more lives in the past two decades than any other motivational work in the world. More than nine million people continue to find solace and hope in The Greatest Salesman in the World, the gripping tale of a little camel boy, Hafid, who becomes the greatest salesman in the world through following the principles in the 10 special scrolls of success.

And now, at last, the world will discover what happens to the greatest salesman when he finally emerges from his lonely retirement to commence a new career. At first, he finds failure - until he receives a special gift from someone he has not seen in half a century. He then returns triumphantly to his homeland to write his own 10 vows of success to be shared with all who seek a better life - including you.

The Greatest Salesman in the World, Part II: The End of the Story will touch the hearts of those millions who already know Hafid as a beloved friend - and introduce his wisdom to a vast new generation.

Ce que les auditeurs disent de The Greatest Salesman in the World, Part II: The End of the Story

forget how the narrator is narrating and focus on the story, and you will love this book. I first bought this audio book and returned it after listening for two minutes. I purchased it again and listened to it at Speed 1.25. That way it sounded better. Not that the narrator is terrible, but switching to his way of narrating directly from listening to the first part of the story can be daunting.

the prayer at the end is worth the book

I much prefer the first book over this one. the story and the reader paled greatly in comparison. however, I am most grateful for the prayer at the end of chapter 18 and for that prayer alone i am grateful I completed this book

Must Read for anyone who really cares about having a fulfilling life. I feel like I'm equipped with so much wisdom to handle life after reading this.

Timeless, instructive and inspirational, I dare to say: A perfect literary work. I highly recommend this book

need to pay attention. not a good listen in the car. this in my opinion is a sit and listen to focus.

One of the Greatest Books Ever Written!

It is, without a doubt, one of the greatest stories ever told! I’ve listened to The Greatest Salesman part one and part two many times in my career and each time I go back to it, it changes me in a positive and profound way. This is 2020 and I thank you Og Mandino for touching my life over the years and especially the first time in 1993.

Great listen. Highly recommend that you clear your mind and relax. Let this book take you.

Not bad for a sequel! Just can't compare to #1

Great words of wisdom which starts on the second half of this book. Salesman advise are amazing once again.. but the story is not quit there like part 1 for me.