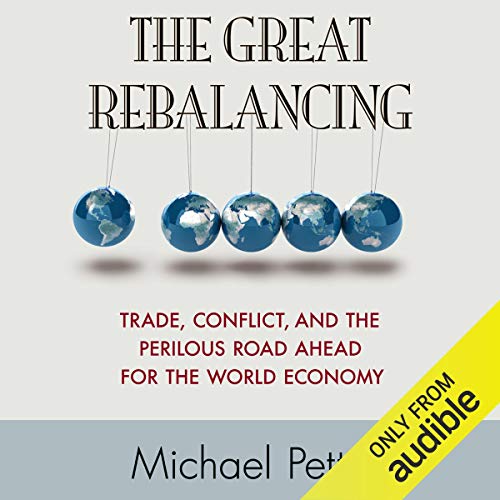 China's economic growth is sputtering, the Euro is under threat, and the United States is combating serious trade disadvantages. Another Great Depression? Not quite. Noted economist and China expert Michael Pettis argues instead that we are undergoing a critical rebalancing of the world economies. Debunking popular misconceptions, Pettis shows that severe trade imbalances spurred on the recent financial crisis and were the result of unfortunate policies that distorted the savings and consumption patterns of certain nations. Pettis examines the reasons behind these destabilizing policies, and he predicts severe economic dislocations--a lost decade for China, the breaking of the Euro, and a receding of the U.S. dollar--that will have long-lasting effects.

Pettis explains how China has maintained massive--but unsustainable--investment growth by artificially lowering the cost of capital. He discusses how Germany is endangering the Euro by favoring its own development at the expense of its neighbors. And he looks at how the U.S. dollar's role as the world's reserve currency burdens America's economy. Although various imbalances may seem unrelated, Pettis shows that all of them--including the U.S. consumption binge, surging debt in Europe, China's investment orgy, Japan's long stagnation, and the commodity boom in Latin America--are closely tied together, and that it will be impossible to resolve any issue without forcing a resolution for all.

Demonstrating how economic policies can carry negative repercussions the world over, The Great Rebalancing sheds urgent light on our globally linked economic future.

Good and fairly easy to understand

This is the first time I got an audio book and the sound and speech quality seems very good to me. On the subject of the book itself, this is a well put together book. It's easy to understand and every technical point is well explained even for people untrained in economics.

A classic & must read!

This book brings much trade related noises we often hear on the media into perspective, it is refreshing and non-political. The global comparison of surplus and deficit countries led naturally to policy advices that are thought provoking. I do feel there could be more discussion about how competitiveness gets built through time and continued trade interventions policies. Recommend for anyone working in investments or just simply interested in global trade/balance of payments.

wake up America , your being played a fool by your financial consultants and will never recup your losses

A must read for all economists in the world. Different and sensible global economic theory

A must book for whose interested in finance, economy and geopolitics or world matters. Although the performance is excellent i recommend the paper or kindle version since the topics sometimes require reading back as well as seeing the formulas.

Deep and professional while easy to understand.

What did you love best about The Great Rebalancing?

It's deep and professional, while also written in easy to understand language with many examples that really clarify the subject. It's also free from hidden advertisements - no references to paid web sites etc...

It describes the current economic situation in objective and balanced way, including some non so intuitive economical matters in simple ways.

This is a really good book, might be worth a second read.