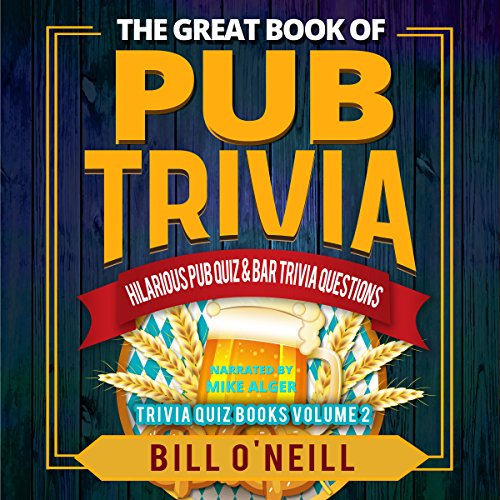 Have no fear! The Great Book of Pub Trivia Volume 2 is finally here, and it’s the perfect companion for game nights, fun family times, fun evenings with friends, or just reading to brush up on your pub trivia knowledge. These trivia questions will get your brain working, that’s for sure. You’ll get instant access to fun quizzes covering different topics such as film, politics, science, history, fashion, and many more.

This is a character in Star Wars and one of the villains in the franchise.

He was Darth Sidious' first apprentice and a Sith Lord. He has quite a shocking appearance, with black and red skin, yellow eyes, and horns. He survived death in The Phantom Menace, killed Obi-Wan Kenobi's love interest, and formed a group of crime lords called the Shadow Collective.

What was this character’s name?

Almost half of the world’s population speaks one of only 10 languages as their mother tongue.

He is one of the most iconic villains in film and television, who we first met in the 1952 novel Psycho, by Robert Bloch.

The character is psychotic and has dissociative identity disorder. He also suffers from visual and auditory hallucinations. His delusions made him think he was his mother and that she was controlling him to kill people. The character was inspired by notorious serial killer Ed Gein.

What is this character’s name?

The King of Trivia does it again.

Talk about owning a space, this Author has conquered the Trivia section of the Book and Audio world.

He and his team of researchers have the ability to find the little tidbits of facts that will titillate the most discerning of Listeners.

Have a listen and have some fun.

Listened to this driving down the east coast, kept the car conversation going. Thanks !

This is a fun and interesting audiobook with an assortment of quizzes covering numerous topics. I was actually surprised by how many of the answers I knew (a solid “C” LOL). It’s also a fun learning tool if you just want to know more about pop culture, history, music, movies, and so many other topics. I haven’t shared this with any friends yet, but I think it would be great fun at a party or other gathering.

The narration was great. The delivery was smooth, even, and well-timed. Mr. Alger gave just the right amount of time between the questions and the answers, and he has a pleasant voice.

This is the third book I’ve read/listened to by this author. I enjoyed his random facts. Some seemed common knowledge and others were so random I’d love to know how many listeners actually knew the answer. He covered a wide range of topics. I listened to it by myself. I think it would be much more fun to listen with friends.

This is the first book I’ve listened to by this narrator he did well narrating this content. I did not feel the pause between question and answer was too long. Perfect to give people time to immediately answer or pause the narration to ponder the answer.

I was given this free review copy audiobook at my request and voluntarily left this unbiased review.

The cover says it all

Bill O'Neill is back with another entry in his historical trivia series, however, this entry is set up not as a comprehensive look at a single event in history, but literally as a quiz using questions drawn from historical events and even a few from pop culture.

As this is a question/answer format, you're probably not going to be reading this as if it was a regular book. But if you're hosting a trivia night you can use this book with very little effort on your part. Mike Alger's pronunciation is perfect and never stumbles. Just hit pause after the question is finished, wait for your players to turn in their answers, then resume play for the correct answer

**I was provided with a promotional copy, at my request, and have voluntarily left a fair and honest review**

Fun for all who listen

This was a fun listen. The audiobook was set up nicely with a delay between the question and the answer. Made the commute to work a lot of fun. Some of the quizzes I was thinking "Wow I am quite smart", and then the next round I would not know a single answer. The book covers trivia from historic to modern.

This trivia volume has a well-balanced quiz structure that can be used for a variety of groups. The five question format works well and the well-spaced gap between questions allows for the stopping of the presentation after each. Very well done!

It is what it says it is.

I'm not sure who this is for. I finally settled on this being for a family on a road trip. The question selection is fantastic and plenty of context is given prior to the author reading the questions. However the duration in between the question and the answers is murder. There is not enough time to really discuss or debate the question but if you guess right away you still have to wait to get the correct answer. I hope the next edition works that out.
"I was given this free review copy audiobook at my request and have voluntarily left this review."

I loved this book from the opening music to the final question. It is essentially a series of questions, but the author has written them in a detailed manner filled with details. If you don't already know the answer, you get hooked and learn something new. The questions cover all topics (culture, events, music, art, etc.) and range in difficulty to everyone from adults to kids have a chance to guess correctly.

This audiobook is going to the top of my list for our upcoming family vacation which includes 20+ hours in the car!

The narrator, Mike Alger, gets 5 stars! His voice and inflection are perfect for this book - the wrong narrator could make this seem like just a list of questions but Mr. Alger makes you feel like you're a contestant on a game show with a grand prize package at stake - he makes it fun, lively and engaging.

This book is perfect for people who love trivia! I found myself shouting out the answers when I knew them and adding new random facts to my mental Rolodex.