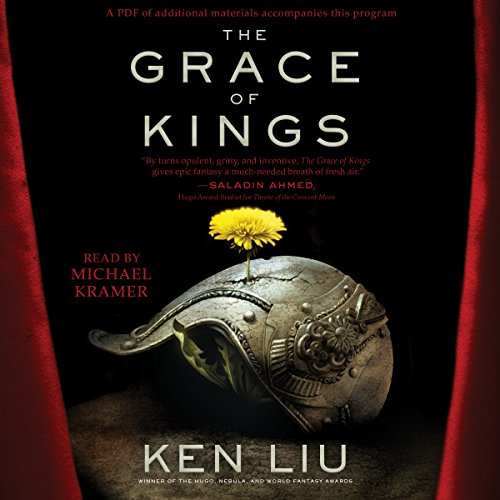 The Grace of Kings

Two men rebel together against tyranny - and then become rivals - in this first sweeping book of an epic fantasy series from Ken Liu, recipient of Hugo, Nebula, and World Fantasy awards.

Wily, charming Kuni Garu, a bandit, and stern, fearless Mata Zyndu, the son of a deposed duke, seem like polar opposites. Yet in the uprising against the emperor, the two quickly become the best of friends after a series of adventures fighting against vast conscripted armies, silk-draped airships, and shapeshifting gods. Once the emperor has been overthrown, however, they both find themselves the leaders of separate factions - two sides with very different ideas about how the world should be run and the meaning of justice.

Fans of intrigue, intimate plots, and action will find a new series to embrace in the Dandelion Dynasty.

I came to this title with high hopes.
Fan of GRR Martin and Patrick Rothfuss, I've also read my share of Raymond Feist, Robert Jordan and Brandon Sanderson.
Love world building, I enjoy delving into well developed intricate worlds and characters . Over 20 hours? Yay!
I also think a lot of Ken Liu. I've had the pleasure of reading and hearing ( through podcasts like podcastle) short stories he wrote or translated. Great stuff, highly recommended.
So.
Great author, big world. Check
Add the Asian template and I was sure I was going to love this.
What could go wrong?
Unfortunately ... Lots of stuff.
While the epic scale certainly seems to be there : the fate of island kingdoms in a time of turmoil while men and gods challenge each other etc.
all the parts just never fit together.
The book comes across as clunky, by-the-numbers painting and just not working. At all.
The 2 main characters are not caricatures exactly but certainly not subtly developed either, I never real felt anything for the majority of the multitude of characters that are introduced so a main part of the story just didn't work.
I actually found the beginning promising , with the description of colorful new kingdoms and states, heroes and ideas but the second and third act are just lazy.
Don't get me started on the info dumping.
Characters lumber towards their inevitable conflicts with all the predictability of spaghetti westerns and high-noon showdowns .

My personal low-point in this book is the treatment of gods and their struggles. It almost feel like the were inserted as an editorial afterthought .
Remove any reference of them out from the book and hardly anything seems to change . At all.

A tale of two brothers who - sigh- end up on opposite sides is supposed to illustrate... Something . (A weathervane I suppose for the overall struggle), but the characterization just left me yawning.
Overall:
It's not dreadful. ( and btw, great performance from the narrator )
Just not good.
Skip it .
A bad misfire from a good author.

3.5 stars. Inspired by ancient Chinese epics, The Grace of Kings is a worthy entry into contemporary fantasy. The characters combine larger-than-life qualities of cleverness, wisdom, strength, and courage with familiar human flaws and frailties to produce a story that's as much a play of ideas as an adventure.

The novel is set in a world where seven distinct cultures (some more "Asian" than others) have always resided on seven different islands, constantly fighting with each other, but maintaining a balance of power. However, that ended when one nation developed a powerful fleet of airships and conquered all the others. The new emperor, now in power for some years, has labored to impose a single system on all the nations. But the forced peace begins to unravel when a scheming official assassinates the Emperor and installs a new, more pliable ruler, who doesn't understand that power is a double-edged sword.

Living on one conquered island, indifferent to politics, is the clever but shiftless young Kuni Garu, whose personal philosophy is all about making the most interesting, if not necessarily the most responsible, choices. Growing up elsewhere is an imposing young man named Mata, who burns for revenge against the Empire after what it did to his family, and has little patience for anyone he considers weak or cowardly. And in the background are the gods, who are carrying out their own celestial struggle through small acts of manipulating human affairs.

In their own ways, Mata and Kuni are each pulled into leadership roles when a rebellion begins, the former as an uncompromising warrior, the latter as a bandit leader who reluctantly accepts the mantle of greater responsibility. The two join forces and eventually vanquish the enemy in a series of tough battles and daring schemes.

However, that's only the halfway point of the book. In in addition to the usual political upheaval that accompanies a conflict's end, the outcome of the war sows seeds of division between the two friends, and Kuni exiled to his own small domain, while Mata goes on to prove that a warrior's strength and uncompromising will don't always translate to being a good ruler. And so the novel's real struggle begins, not just over territory, but over values and ideas. The world of the seven islands can't go back to what it was, but where should it go?

As a writer, Liu seems as interested in instruction as storytelling, using characters to embody different philosophies about religion, governance, leniency vs. force, the roles of men and women, science, how to reconcile differing cultural ideas, how to live, love, etc. As a result, most of the characters aren't as well-developed or permanent to the story as Kuni and Mata, and I found myself losing track of who was who at times, especially given that some names sounded similar in the audiobook. The different cultures and gods were also a little confusing to keep in order.

Still, even if the lessons in the story were conspicuous, Liu's insights found their way in with sufficiently light, humorous touch for me to enjoy the novel and its Eastern flavors. If the years to come bring more fantasy set in a Chinese, rather than Western European, milieu, I won't be disappointed.

The story seems to following the model of ancient Chinese classics like The Romance of Three Kingdoms a bit too closely - Grace of Kings attempts to portray generations of history and myth, unfortunately characters and finer plot points get swallowed up in the confusion. This could be three or four moderately long novels instead of one big epic.

This didn't scratch my fantasy itch - maybe I'll check out Wheel of Time finally, or the audiobook version of Game of Thrones.

Which character – as performed by Michael Kramer – was your favorite?

Honestly - I don't remember them.

Do you think The Grace of Kings needs a follow-up book? Why or why not?

Unfortunately, no. There is enough material here for at least a trilogy, which is part of the problem. Perhaps a new series in the same world would be interesting, as long as the author takes his time.

Despite feeling like this book was a bit of a dud, I do like Liu's style and feel his future work may be worth a try.

If you're not a fan of 'fated' stories where every success or failure is due to a very clear personal flaw of the character and where every character slighted or rewarded comes back to right the scales in some way, then this book is not for you. If you can't handle too many names (especially Chinese ones) and characters then this story is not for you. If neither sounds boring to you then you will delight in this story. The author had built a fantastic world based on South Asia (mostly China) with fantastical elements thrown in for spice. The world comes off as very believable (besides the many inventions near the end of the book) and the character are all quite interesting. The story flows quite well and is really long. I honestly thought this would be the first book in a series as it went on, but it finished up quite nicely and in a satisfying way.

I mean, it was alright. The concept is actually very cool. I've never heard of anyone attempting a "silkpunk" fantasy before but the story was flat. I was only compelled by the characters at certain moments. The stakes didn't seem very high because they escalated so quickly to encompass the whole world the book takes place in. Then there's like a second plot that occurs after they accomplish the first. I will cede that the way the first resolution folds into the second and ultimate conflict of the story is thought out and executed well. It did not feel that the book was going any direction. The narration often jumps from the main part of the story to flash backs that are rife with exposition. However, that might be a personal aesthetic decision because I much prefer a narrative that stays with the character throughout the story, not flashing back to expose certain aspects of the narrative. Preferences I guess.

Overall I greatly enjoyed the piece, but felt the execution lacking

not a fantasy novel

this is an embellished telling of the beginning of the han dynasty. the names and places have been made up but significant events in the book are directly lifted from the written histories.

I’m at war with myself over this book.

Though I was not a huge fan of the story telling style at times I will have to admit that there is beauty in the way this story is told. It does jump around and sometimes I did have to go back because I simply missed a large battle that was only a paragraph long but at other times the story was so heartbreaking and beautiful.

I lack the words to express my true love of this novel. I read 3-4 books a week, yet this one is this year's favorite, without a doubt.
I finished it moments ago, paused to write this review, then will play book 2.
Thank you, Audible, from taking me away from a tough time in life. Thank YOU, Ken Liu, for gracing the world with your idea. Thanks to your wife as well, as you have said this book was a joint effort.
This book is HUGE in its ideas; stupendous in its breadth and content! Gorgeously composed, and wonderfully recited. Highly recommended!

Conceptually good, but too many short-cuts

In many ways, this had the makings of a good story. But it fell short of the "epic" it is advertised as, and that's too bad. I don't want to inadvertently spoil anything, but it seemed that too often when a crucial moment was upon a leader or main character, betrayal was a foregone conclusion, or a leader or character made a snap decision or went against their previous nature & it seemed done more to advance the storyline, rather than to remain true to what we believed about the character. It just rang false several times, which took me away from the story or caring about it any more. And that seemed to happen too often. Which may even be true to human nature...history is, after all, full of decisions made by leaders to advance agendas rather than out of concern for humanity or the world.

Anyway, it was obviously a good enough story, as I completed it. I just don't know that if recommend it.

Full of interesting details while maintaining a light touch. It's hard to write a decent review. I'm just really happy this book exists.