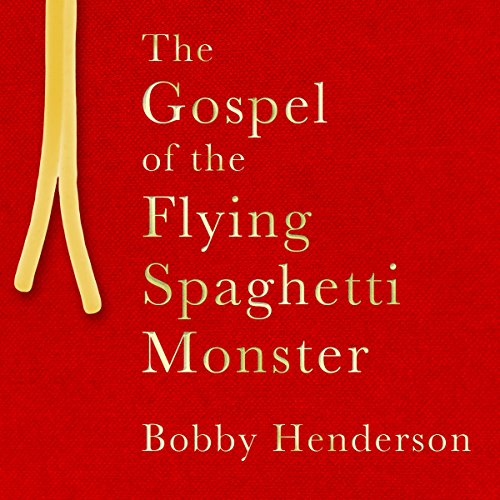 It all began in June 2005 when Bobby Henderson of Oregon wrote an open letter to the Kansas School Board proposing a third alternative to the teaching of evolution and intelligent design in schools. Bobby is a prophet of sorts, the spiritual leader of a growing, world-wide group of followers who worship the teachings of The Flying Spaghetti Monster (FSM). The FSM appeared to Bobby as a giant ball of spaghetti, with meatballs for eyes, and touched Bobby with "His noodly appendage" - resulting in the revelation that the FSM is the real creator of the universe. The FSM faithful look to Bobby as their prophet and spiritual leader. They call themselves FSMists or "Pastafarians".

Shortly after Bobby's revelation and his letter to the Kansas School Board, a website (www.venganza.org) came into existence to promote the word. Then came the articles, which were worldwide: The New York Times, The Washington Post, The Guardian (UK), Die Welt (Germany), Surprise (Austria), and many others chimed in to report the existence of the FSM. Bobby received letters of support from academics and Kansas School Board members alike - not to mention a couple million hits per day on the website. Then students began proselytizing across campuses nation-wide, and it was all-too-clear that there needed to be a book to lay out FSM scripture, rites and observances, proofs, and answers to the Big Questions.

With its loose moral standards, and the offer of a heaven featuring both a stripper factory AND a beer volcano, Pastafarianism will only grow in numbers. And all those people are going to want to listen to this book.

Well it was a bit heavy on the math and science I feel that listening to this while nodding slowly certainly made me look smarter which means that after finishing it I must be smarter. Highly educational and I will probably listen to it repeatedly increasing the enthusiasm of my nodding until I appear to be a super genius.

I love the idea of this book. It's definitely original and fun. However the book suffers from some problems related to being a parody of the ridiculous logic creationists use to try to defend their positions. There are sections of long-winded section with ridiculous nonsensical math equations that are decent parody but are parodying something freakin' boring and thus are also pretty boring. The book starts out strong but then all the essays and whatnot starts getting tedious.

This is religion, not a story.

There is nothing within that even the staunchest Christian apologist would. It support, if only it was about their invisible friend and not the FSM.

wonderful book, I feel his noodely apendage and know he is real. May your sauces be warm and your noodles tasty

Have you been touched by his noodley appendage? The FSM is just as plausible as any other god (if not more so!). Give his noodliness a chance.
Ramen.

Read only if you want your intelligence insulted

Uninformed atheist and agnostics might appreciate an arguement that would only give credence to those beliefs, while mocking anyone who believes in a higher power.

hey, if anyone this stupid could publish a book, maybe I could do it as well! There is always a bright side.

All hail the FSM!

Funny, satirical, needs a bit of scientific knowledge to be truly understood.
Loved the way it was read.