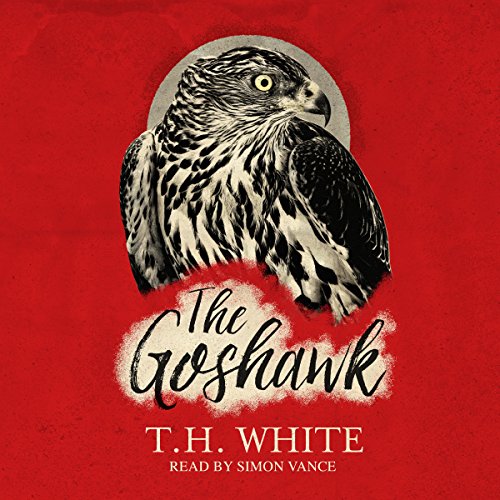 This modern classic of nature writing by the author of The Once and Future King was an inspiration for and featured in Helen Macdonald's prize-winning H Is for Hawk.

"No hawk can be a pet. There is no sentimentality. In a way, it is the psychiatrist's art. One is matching one's mind against another mind with deadly reason and interest. One desires no transference of affection, demands no ignoble homage or gratitude. It is a tonic for the less forthright savagery of the human heart."

First published in 1951, T. H. White's memoir describes with searing honesty his attempt to train a wild goshawk, a notoriously difficult bird to master. With no previous experience and only a few hopelessly out-of-date books on falconry as a guide, he set about trying to bend the will of his young bird, Gos, to his own.

Suffering setback after setback, the solitary and troubled White nonetheless found himself obsessively attached to the animal he hoped would one day set him free.

"He was born to fly, sloping sideways, free…"

The Goshawk (1951) is T. H. White's fascinating account of when, "a deluded and imaginative recluse," he fled from the world and human beings into a wood, pared his life down to essentials, and tried via old falconry books and trial and error to train a young, wild male goshawk. The first part concerns his attempts in 1937 to tame and teach "Gos," the second his attempts to catch a new hawk, and the third his attempts to get a female hawk ("Cully") to make her first kill. He wrote the postscript in 1951, some fifteen years after the main events, when he finally published the book.

White desperately wants to succeed with Gos. Unfortunately, as Helen Macdonald points out in her excellent book H Is for Hawk (2014), he sabotages his chances for success. As he himself says, "It has never been easy to learn life from books." His old falconry books persuade White to prevent Gos from sleeping for from three to nine days to exhaust the bird into surrendering to the gloved hand as to a haven. To White's credit (?), he torments himself along with Gos, staying awake with the bird. But when White recites Shakespearean tragedies to Gos and plays and sings operas and so on to prevent him from sleeping, one may recall the loud rock music forcing awake prisoners in Guantanamo Bay. Ironically, when White notices malnutrition-caused defects in Gos' feathers, he panics and overfeeds him, against the good advice of his books. Despite knowing that one must use patience rather than cruelty to train a hawk, at times White feels like an executioner in a torture chamber. Indeed, he talks about his relationship with Gos as a war: "They were days of attack and counter-attack, a kind of sweeping to and fro across disputed battle fields."

And when, after all the setbacks, White was on the verge of success, he--But that would be telling.

The Goshawk, mind you, is not only a painful book. For White, contact with Gos is better than romance (conflict between men and women) and war (cruel and wasteful activity). Being with Gos leads to the fusing of human and bird, as when White feels with Cully that "Our veins coalesced and the blood ran in a circuit through both of us." Being with Gos leads to transcendence, as when White feels himself sitting on God's fist as Gos sat on his fist: "so transitory as to be eternal, so finite as to be infinite and a part of the Becoming." There are moments of pure joy, as when Gos first flies to the fist, and moments of comedy and numinous beauty, as when he takes his first bath.

White's minute observations of Gos (careful, for hawks prefer regarding to being regarded) lead to many wonderfully vivid descriptions of him, like this early one: "The yellowish breast-feathers—Naples Yellow—were streaked downward with long, arrow-shaped hackles of Burnt Umber: his talons, like scimitars, clutched the leather glove on which he stood with a convulsive grip: for an instant he stared upon me with a mad, marigold or dandelion eye, all his plumage flat to the body and his head crouched like a snake's in fear or hatred, then bated wildly from the fist." And his careful observation and contemplation of the natural world in general leads to many great descriptions, of everything from pigeons ("Grey Quakers") to maggots ("crackling with life" and "perfectly persisiting").

As we read The Goshawk, we learn terms and facts relating to falconry, which is as old as Babylon. An "austringer" (how White refers to himself) is a trainer of short-winged hawks. "Bated. . . . meant the headlong dive of rage and terror, by which a leashed hawk leaps from the fist in a wild bid for freedom, and hangs upside down by his jesses in a flurry of pinions like a chicken being decapitated, revolving, struggling, in danger of damaging his primaries." White provides many details of hawks, from their not drinking water to their seeing farther and breathing faster than other animals (especially humans), and being highly strung: "For him everything was danger and exaggeration, life was a quiver far more taut than anything known to us."

Though White says of his book that "It would be about the efforts of a second-rate philosopher who lived alone in a wood, being tired of most humans in any case, to train a person who was not human, but a bird," like all great literature it is about more than its apparent subject. It's also about civilization, nature, and how humans negotiate the distance between them. It's about history, art, sport, life and death, and White's own idiosyncratic misanthropy. It's about writing books, about making something good and lasting, which is for White the best thing people can do. White's life goal and way of working towards it resemble Thoreau's in Walden: "To divest oneself of unnecessary possessions and mainly of other people, that was the business of life. One had to find out . . . what things were really needed." And like The Once and Future King (1958), The Goshawk is an anti-war book written on the eve of and early in World War II, and fans of White's famous work will find echoes of it in this one: the mixture of comedy and tragedy and romance and the empathic imagining of animal life.