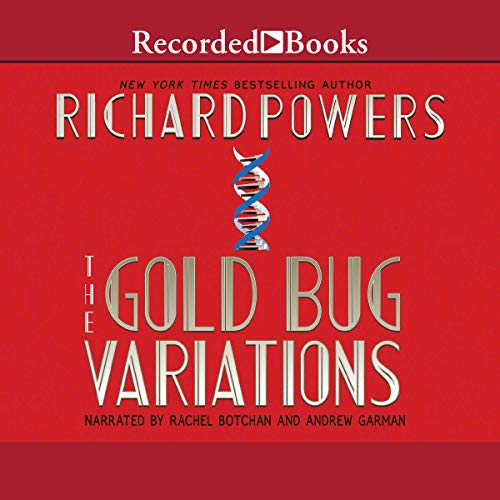 A national best-seller, voted by Time as the number-one novel of 1991, selected as one of the "Best Books of 1991" by Publishers Weekly, and nominated for a National Book Critics Circle Award - a magnificent story that probes the meaning of love, science, music, and art, by the brilliant author of Three Farmers on Their Way to a Dance.

Stuart Ressler, an up-and-coming molecular biologist, finds his career sidetracked by the turmoil of the '60s, and a young couple of the 1980s tries to discover why the biologist abandoned his scientific pursuits.

The Gold Bug Variations is a double love story of two young couples separated by a distance of 25 years.

"The Gold Bug Variations equation is as follows: Powers equals Pynchon minus paranoia, tenderly multiplied in one neat doubling by a self-reflective, ever-expanding infinity of wonder. In the stratosphere of American literature, there isn't a writer today, and not many beyond the pale, who approach the candlepower of this guy. Variations is a Big Bang - a great upward, outward heave of Life - and Richard Powers is first in a class of one, 1991. Think I'm kidding? Read the book." This florid hyperbole is attributed to Bob Shacochis, Author of Easy in the Islands, on the back slipcover of a 3rd hardcover printing of the book.

From page 330, "A message, carefully crafted over time, is altered at random. The text will almost certainly suffer, if it remains intelligible at all. The introduction of noise into a signal is much more likely to garble than improve. Failure is lots more probable than anything else going."

I mention these two items to contextualize my deep disappointment in this reading of a book that presumably was carefully crafted over time (think I'm kidding?) but to my ears and eyes, the text certainly suffered at the hands of the two readers. Following visually the text while listening to the reading I noted a sampling of the emendations uttered, including:

and that just in the first half of the book. Add to it pronouncing do-loop as doe (long o) loop (just do it, pronounced Homer style?), and You are for Ur, and the rating stars disappear faster than the sun can rise.

Yes, I'm holding the readers to a far higher standard than is my norm, but I hold the book far nearer and dearer to my heart than most. As the book slogs along, however, I wonder where Richard Powers is in this production (lost and gone forever, other than endorsing the royalty cheques is my hypothesis). As for those putatively overlooking the production? I don't care where they were, just sad they weren't in the studio cocking an ear every once in a while to assure a higher degree of fidelity.

And back to the readers. The unfortunately named Rachel Botchan gets the split decision on who botched things more egregiously. I hypothesize that Ms. Botchan vocalized her first reading of the book, not bothering to read ahead so as to flag perilous passages that require subtler phrasing nuances than a 1980s era text to voice synthesis algorithm might come up with. Evidence for this claim: distinct pauses when text crosses page boundaries, and distinct pauses when tough to pronounce or unusual words appear seemingly out of nowhere. Add to this multiple mini flubs that really would have benefited from a Take Two, clear lapses in visual attention (or maybe those are merely a succession of ectopic pregnant pauses?). And, as the book grinds on, out of nowhere accelerations in pace of delivery, as though her seat is delivering electrical shocks if her wpm rate drops below a target value, only to slow it down again, at least until the next goose speeds things up. At the halfway point I had serious misgivings about my ability to hang in to the bitter end.

p 474, almost at the end of Chapter 21, "The smallest tweak of context changes every sentence." Would have been appropriate for Ms Botchan to substitute content for context, but alas, she has been too busy making other errors to choose this poignant one.

p 531. I give up."but held one another hypothetically" is the text, but the reading substitutes hypnotically for hypothetically. Earlier, another pause going from page 530 to 531 and add a hesitation to figure out that nasty word "chaconne." And on page 530, substitution of the hilarious "litigation" when the text reads "ligation" (as in tubal).

I have been ingloriously punked. Buyer beware.

I thought it was very interesting but where was the editor. seriously, it's fairly absurd.