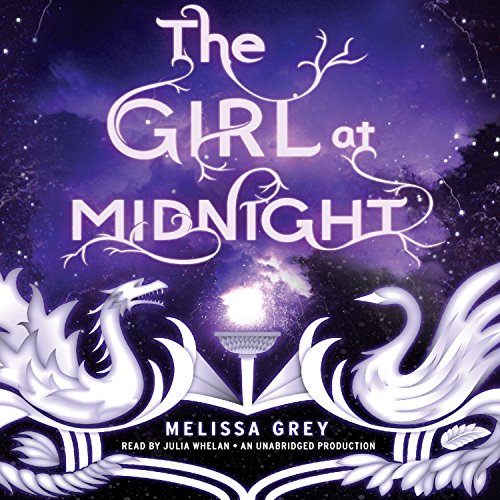 For readers of Cassandra Clare's City of Bones and Leigh Bardugo's Shadow and Bone, The Girl at Midnight is the story of a modern girl caught in an ancient war.

Beneath the streets of New York City live the Avicen, an ancient race of people with feathers for hair and magic running through their veins. Age-old enchantments keep them hidden from humans. All but one. Echo is a runaway pickpocket who survives by selling stolen treasures on the black market, and the Avicen are the only family she's ever known.

Echo is clever and daring, and at times she can be brash, but above all else she's fiercely loyal. So when a centuries-old war crests on the borders of her home, she decides it's time to act.

Legend has it that there is a way to end the conflict once and for all: find the Firebird, a mythical entity believed to possess power the likes of which the world has never seen. It will be no easy task, though if life as a thief has taught Echo anything, it's how to hunt down what she wants... and how to take it.

But some jobs aren't as straightforward as they seem. And this one might just set the world on fire.

I love this book. I love the strong female characters, the all too familiar struggle between status quo and progress, and the glimmer of hope that things can change when we all find a way to put aside our fears and bias.
I will keep this book in my library. It is truly a keeper. Now I am on to book 2!!! 5 STARS!!!!

I started to read this book without any notion of the similarities other GR readers attached to it... I'm referring to The mortal Instruments series or Daughter of Smoke & Bone that I don't know at all so I enjoyed this story and this take of the author about mythology very much and even if there were parts of the dialogs a little bit over the top and the end was a little too easy I loved this story and characters. The writing was so poetic and the narrator's performance was excellent!

I liked this book a lot more than I thought I would. I can't wait to listen to the next books in the series. I like the character's in the book and the details. I also like the friendships / relationships of the characters.

Fun Fact: I had to start it at midnight because it has midnight in the name :D

I listened to this book on Audible and it was so great. The summery compares it to Cassandra Clares City of bones and Shadow and Bone by Leigh Bardugo. I have not read the latter but I can tell you as much as I absolutely love City of Bones this was nothing like it. It was so completely different and original I am not sure what to compare it to.

There are ancient races of people living under the city of NYC. These people have feathers and magic and though hidden are very strong people. Echo is not physically one of them but she is living with them. Echo is a strong yet vulnerable young woman. She is pulled into an adventure that she never saw coming. Which is saying something considering she lives in a library and knows an ancient race of people.

This book is full of adventure and excitement. There is a prophecy no one actually believes but still pops up anyway like those pesky prophecies do. This is what sends Echo on her quest and adventure. This book hooked me and sent me right to book 2 when this one ended.

If you choose to listen as I did you will also enjoy the narrator. Where this can often affect the book in negative ways this is not the case. She has an amazing way of distinguishing the characters from one or the other.