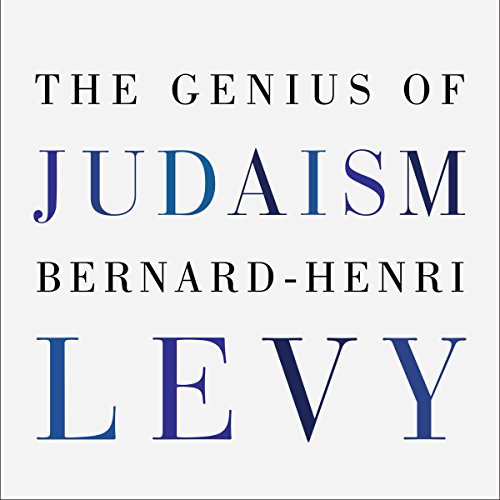 The Genius of Judaism

From world-renowned public intellectual Bernard-Henri Lévy comes an incisive and provocative look at the heart of Judaism.

For more than four decades, Bernard-Henri Lévy has been a singular figure on the world stage - one of the great moral voices of our time. Now Europe's foremost philosopher and activist confronts his spiritual roots and the religion that has always inspired and shaped him - but that he has never fully reckoned with.

The Genius of Judaism is a breathtaking new vision and understanding of what it means to be a Jew, a vision quite different from the one we're used to. It is rooted in the Talmudic traditions of argument and conflict, rather than biblical commandments, borne out in struggle and study, not in blind observance. At the very heart of the matter is an obligation to the other, to the dispossessed, and to the forgotten, an obligation that, as Lévy vividly recounts, he has sought to embody over decades of championing "lost causes", from Bosnia to Africa's forgotten wars, from Libya to the Kurdish Peshmerga's desperate fight against the Islamic State, a battle raging as we speak. Lévy offers a fresh, surprising critique of a new and stealthy form of anti-Semitism on the rise as well as a provocative defense of Israel from the left. He reveals the overlooked Jewish roots of Western democratic ideals and confronts the current Islamist threat while intellectually dismantling it. Jews are not a "chosen people", Lévy explains, but a "treasure" whose spirit must continue to inform moral thinking and courage today.

Lévy's most passionate book, and in many ways his most personal, The Genius of Judaism is a great, profound, and hypnotic intellectual reckoning - indeed a call to arms - by one of the keenest and most insightful writers in the world.

I thought this book was going to be in the mystical tradition, or at least rabbinical, about the genius of Judaism. Instead it was a long history (and present) of anti-Semitism in France.

I was unfamiliar with Bernard-Henri Levy until now. Stylistically, I have read few, if any, books that beam with both intellectual weight and aesthetic language throughout. It is clear that Bernand-Henri loves France and has seemingly come to appreciate his Jewish heritage only more recently. Perhaps this book is the result of his unexpected fascination with Judaism and a need to reconcile the modern problems with religion (any religion) and a belief in God to the flourishing to secular ideals. It's beautiful.

The substance of the book delves into a stunning and brilliant analysis of Anti-Semitism. He notes the very specific forms and expressions of Anti-Semitism throughout history from an almost anthropological perspective. Perhaps one of the most profound discussions in the book is his speculation...and warning...of a new kind of Anti-Semitic construct forming today. He observes that charged language must become socially-acceptable, accusations of Jewish wrongdoing must become popular, and open violence must be intellectually defensible, even as we tepidly condemn it. This new strain of hostility will be perfectly suited to the spirit of the age and therefore, difficult to see, harder to stop...just as it was each time in the past.

You will also find a meaningful and in-depth analysis of the situation in Libya. His personal experiences and conclusions are laid out for us in detail. He urges compassion and action for Muslims who are suffering around the world. He sees their struggle as our struggle.

Finally, Barnard-Henri grapples with the conclusion (and namesake) of the book. He tries to create an intellectual framework that bridges a secular world view to an ancient tradition of monotheism. He believes he found the secret. However, it is unclear to me whether the author has truly discovered the one genius of Judaism, or merely the genius of Bernard-Henri Levy as he attempts to build this bridge. Even if you disagree with him, the book is faultless in its sincerity.

a timely book written with passion and conviction that one cannot put aside for a moment.

There is no indication in the introduction that the author will spend so much time speaking specifically about French Jews, the beginning of the French language, untranslated French words that are not part of the common parlance. The narrator is fine, though a bit nasally.

I listened to this book and it was difficult. Great but difficult. I had to order a hardcopy because this book requires study. My first experience of BHL as he is called. However just a beginning but so happy I've opened the door to this man.

The title is clickbait

To keep it short: not able to listen past the first 40 minutes because there is nothing in there about the genius of Judaism (the reason I bought this book). The title should have been “The Evil of Antisemitism”.

I wish he talked a little bit more about the last 1/3 from the very beginning. It was an excellent story and he could be extended to be almost did geniuses of religions