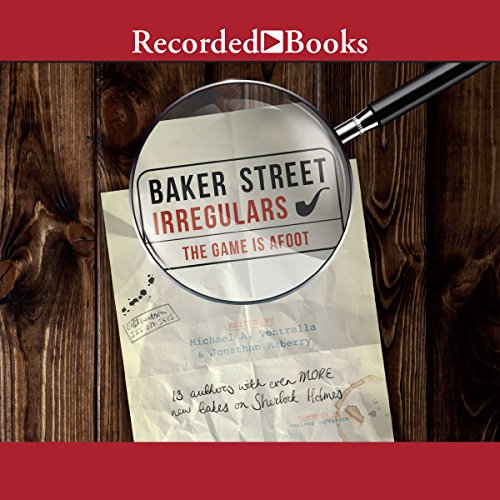 The Game Is Afoot

Sherlock Holmes is one of the most iconic and lasting figures in literature. His feats of detection are legendary, and he continues to capture audiences today in stories, movies, and on TV. In this new edition of Baker Street Irregulars, authors present the iconic detective in over a dozen wildly entertaining new ways.

In Keith DeCandido's "Six Red Dragons", Sherlock is a young girl in modern New York City. In Sarah Stegall's "Papyrus", Sherlock is a female librarian in ancient Egypt. In Daniel M. Kimmel's mesmerizing "A Scandal in Chelm", Sherlock is a rabbi. Derek Beebe sends Sherlock to the moon, while Mike Strauss, in "The Adventure of the Double Sized Final Issue", casts him as a comic book character.

The settings range from a grade school classroom to Jupiter, from rural, post-Civil War to an alien spaceship. Without losing the very qualities that make Sherlock so illustrious a character, these authors spin new webs of mystery around their own singular riff on one of fiction's truly singular characters.

Stories in this volume:

"The Problem of the Three Journals" by Narrelle M. Harris
"Six Red Dragons" by Keith R. A. DeCandido
"The Adventure of the Diode Detective" by Jody Lynn Nye
"Investigations Upon Taxonomy of Venomous Squamates" by R. Rozakis
"Papyrus" by Sarah Stegall
"My Dear Wa'ats" by Hildy Silverman
"A Scandal in Chelm" by Daniel M. Kimmel
"The Affair of the Green Crayon" by Stephanie M. McPherson
"A Study in Space" by Derek Beebe
"Sin Eater and the Adventure of Ginger Mary" by Gordon Lizner
"The Adventure of the Double Sized Final Issue" by Mike Strauss
"A Very Important Nobody" by Chuck Regan
"Ho Ho Holmes" by Nat Gertler