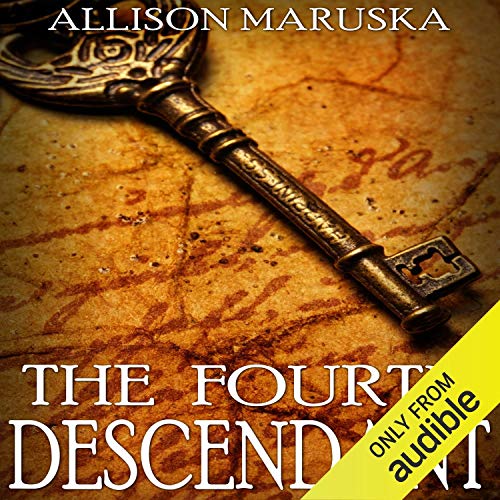 When Michelle receives a call from a Richmond historian, she sees the chance for a much-needed adventure. All she has to do is find a century-old key.

Three others - a guitarist, an engineer, and a retiree - receive similar calls. Each family possesses a key to a four-lock safe found buried in a Virginia courthouse, though their connection is as mysterious as the safe itself. Their ancestors should not have interacted, had no apparent reason to bury the safe, and should not have disappeared thereafter.

Bearing their keys, Michelle and the other descendants converge in the courthouse basement and open the safe, revealing the truth about their ancestors - a truth stranger, more deadly, and potentially more world-changing than any of them could have imagined. Now it's up to them to keep their discovery out of the wrong hands.

"I rarely read a story that I can't wait to get back to, and this was one. It's full of drama and suspense. It's fresh and new, something very much needed, and it's totally unpredictable." (John Darryl Winston, author of IA: Initiate)

So much potential,yet so disappointing

Based on the summary, I was really looking forward to listening to this. At first, I thought it was the horrible, staccato delivery of the narrator. Regretfully, that was just the first of many things wrong...absolutely no character development or explanation of what was the driving force behind the actions of key characters, the ending was as if the author thought, "I have no clue where to go with this, so I will wrap it up in the most abrupt unsatisfying way possible."

What disappointed you about The Fourth Descendant?

Everything. Lousy writing, terrible narrator. Ending left a lot to be desired as it seems the author tried to tie everything together without a clue as to how to go about doing that.

Has The Fourth Descendant turned you off from other books in this genre?

Would you be willing to try another one of Donald R. Emero’s performances?

What made the experience of listening to The Fourth Descendant the most enjoyable?

The plot twists were the best part. The story kept me guessing. I can't say more without giving things away. I'd like to talk about the ending, but it would spoil it.

Jonah. At the start you think he'll be just your stereotypical dread-locked musician, but he turns out to be much deeper.

Which character – as performed by Donald R. Emero – was your favorite?

He didn't perform any of the characters better or worse than the others. I was impressed with the narration; he has a nice, resonant voice. In a few places, perhaps, he overdoes the difference in voices between the different characters, but it's not a problem. He doesn't overact. His voice sounded a little deeper in later chapters.

Four ordinary lives, brought together by one extraordinary discovery.

I was puzzled by some of the other reviews. This is well-crafted and satisfying fiction. I enjoyed it all the way through. Concerning the storyline, be sure to check out the many positive reviews of the written version of this book on Amazon.com (which has, of course, the same storyline).

What disappointed you about The Fourth Descendant?

All of it. Poorly edited, poorly constructed, and lacking a true sense of direction. The premise, and the overall start of the story began well, but it descended into treacle.

What could Allison Maruska have done to make this a more enjoyable book for you?

Look, Donald had a mess to deal with here, so it's unfair characterize his stuff with the crap he had to deal with. On balance he did all do under the limited circumstances.

If you could play editor, what scene or scenes would you have cut from The Fourth Descendant?

I didn’t want to stop listening for a moment. In some way part genealogy, part sci-sci and part romance novel. Good read A+ all around

I think someone who has not read many books MIGHT enjoy this book. The story idea was decent, but the writing style was very basic and the reader was horrible.

Would you recommend The Fourth Descendant to your friends? Why or why not?

I would be ashamed to recommend this book to my friends.

The reader over dramatized every passage as though he were reading to young children.

I can think of no aspect of this book that would make it worth reading.

dumbest book I ever read.

Imagine a what if

Imagining a what if and the consequences thereof ....good story, the ending caught me by surprise, I do not know if it was good or bad.

there goes 6 hours of my life I'll never get back

the narrator was monotonous and dull. the storyline was sporadic, plot development was basic. overall not a good book

Story was bad, Narration made it worse

Awful narration. He sounded like a surfer "dude" reading to a group of kindergartners. To be fair, what he was reading was equally awful. Nothing was plausible about the plot, the characters or their behaviors. Pass this one up.