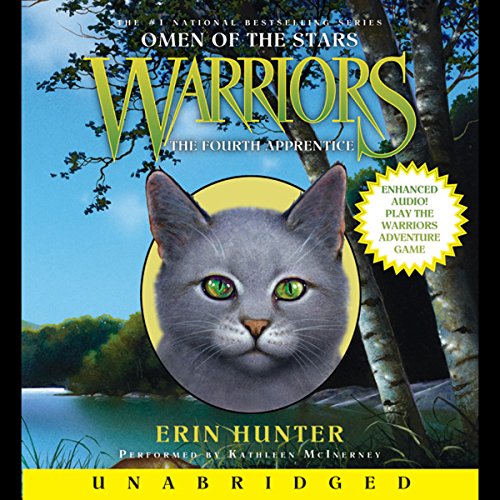 Four warrior Clans have shared the land around the lake as equals for many moons. But a prophecy foretells that three ThunderClan cats will hold the power of the stars in their paws. Jayfeather and Lionblaze know that they are two of the cats in the prophecy. Now the brothers must wait for a sign from StarClan to discover the identity of the third cat.

Meanwhile, Dovekit and Ivykitkin of the great leader Firestar are poised to become ThunderClan apprentices. Soon one sister will have an ominous dream - and will begin to realize that she possesses mystical skills unmatched by any other cat.

In the midst of a cruel season that threatens the lives of all four warrior Clans, bonds will be forged, promises made, and three young cats will start to unravel the secrets that bind them together.

Kathleen McInerney can be a tom, a she-cat, and a playful kit and more perfectly. She is the best warriors narrator out of all. Far better than Nanette Savard.

The narrator was amazing, and had different voices for each cat. It fits with the feelings of characters, and the drama. I love the this book series. I highly advise people who like adventure stories to read the story.

I love it a great book! It has so much drama. And the voices of the cats kinda tell there feelings! 👍👍👍

This book got us through a long road trip. The kids loved it! A bit confusing at first, but the names of the cats start becoming clear in a short time.

It was really good. I think many people would love it. It was great. It was good.

GREAT book to go to sleep to.

i love these books!

i didnt like the narrator much but the book is great! i never listened to a audio book before but it was cool!

I love this audio book, nothing to dislike about it.

A Review of the Performance: So a while back I finished The New Prophecy (I loved it!), and I was so thrilled that I finally got to start The Power of Three. I mean, hello! That's what all the hype is about! You know, everyone always talks about Jayfeather and Rock and all that, and I wanted to get in on it. But they didn't have it on Audible! So I waited and waited and waited, and the first thing I did when I woke up December 6th was download Dark River (I missed the Warrior Cats, so I read The Sight myself.). So now I've finished the Power of Three, and I was excited for Omen of the Stars. But they only had four of the six books, and they weren't narrated by the same person (Macleod Andrews). Now, I'm a fan of his performance, and I've listened to his versions since Into the Wild. I have to say, I was disappointed when I saw this. But my options were: 1, quit being a lazy RainWing and read the books myself. 2, wait for them too come out in March (I finished Power of Three in December of 2019). Or 3, try Kathleen MacInerny's version and see what happens. Of course I went with option 3. I tried Kathleen MacInerny 's version. And guess what? The world didn't collapse. The sky didn't fall. I didn't die. And I have to say, I am impressed, even though I dragged my paws about it at first. So my comments on her performance are as follows. I like Dovewing's and Lionblaze's voices. Feathertail's is actually great. Yellowfang always sounds growly; like she's about to bite your face off. But, I mean, she's Yellowfang, so I understand. I also like Bluestar's voice. This may come as a shock to some of you out there who are familiar with Macleod 's version, I miss Graystripe's lisp. That might be one of the things I liked best about Macleod Andrews's performance. But anyway, I listed some of the voices I liked. But there are some I don't like. I'll start with the big one: Firestar. His voice makes him sound old and... somehow sentimental. And in Fading Echoes, when he is talking to Dovepaw, he sounds kind of mean, whereas Macleod Andrews makes him sound more calm and collected and wise, even when he is scolding apprentices. Another voice that bothers me is Snowdrop. At first I liked it. I thought "Aww, cute kitty." But then, when they were discussing the beavers and asking the kittypets to help, Snowdrop said "We'll come! Won't we, Jigsaw?" And that was the turning point. I stopped finding Snowdrop's voice sweet and cute and started finding it annoying instead. And, this is just an idea, but if it were me narrating, I'd make each Clan speak slightly differently. Like, accents, dialects, etc. Since we can't smell the different Clan scents, I feel as though that could be used as a substitute. Is that a good idea or a bad idea? But overall, I give Kathleen MacInerny's performance a 5 out of 5. Is she as good as Macleod Andrews? I'm not sure. But still, she is very good. A Review of the Book: Overall, this book is thrilling. Yes, I know, thrilling, thrilling, thrilling. A'ight, enuffa dat. But anyway, I like this book. It didn't really capture me at first, however. I'm not sure how to describe it. I listen to this with my father, and the thing that annoys him about this book is that Dovepaw finds out she has superpowers and all she does is fuss about it. He feels the same way about Starflight, from Wings of Fire. It doesn't really bother me as much, but why are you whining and worrying about it so much, Dovepaw? You have freaking superpowers. And I do feel like this book isn't really as action-packed and thrilling (aargh!) as many of the other books, but I do understand that they do have to introduce a completely new cat in the prophecy, and build her character and show her discovering her powers and how she reacts when she sees she's different, so they do have to make this book a little slower than the others. It's almost the exact same situation with book 6 of Wings of Fire, which was the first book after the War of SandWing Succession and the beginning of Made Mountain Academy and the second arc. They had to introduce Moonwatcher, a completely new character who was only briefly mentioned in the epilogue of the previous book, and show how she coped at the new school among and keep her powers a secret from the other dragons. Most of the reviews were complaining about the slowness and brevity of that book, but it was to build up the story. Same with this book. I don't regret it in any way, but I think it could have been better. I love the performance, and I love this series. I'm glad I bought this. May StarClan Light Your Path. --- Bluestorm, deputy of RainClan

Overall the book was okay I liked the reader and it had good descriptive language. The performance totally rocked. I feel like those who like spirit animals and the lost rainforest series or other Erin hunter books could enjoy it if they can tolerate a super annoying cat!