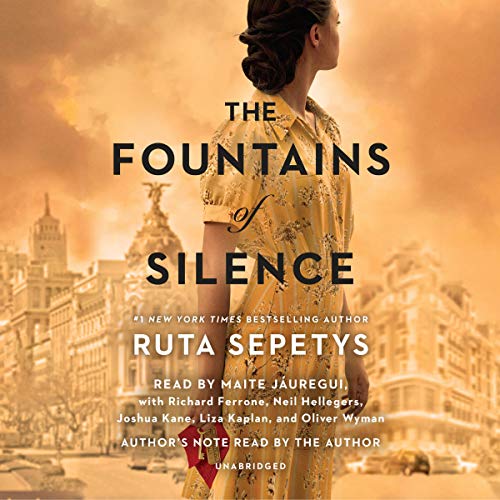 The Fountains of Silence

From the number-one New York Times best-selling author of Salt to the Sea and Between Shades of Gray comes a gripping, extraordinary portrait of love, silence, and secrets under a Spanish dictatorship.

Madrid, 1957. Under the fascist dictatorship of General Francisco Franco, Spain is hiding a dark secret. Meanwhile, tourists and foreign businessmen flood into Spain under the welcoming promise of sunshine and wine. Among them is 18-year-old Daniel Matheson, the son of an oil tycoon, who arrives in Madrid with his parents hoping to connect with the country of his mother's birth through the lens of his camera. Photography - and fate - introduce him to Ana, whose family's interweaving obstacles reveal the lingering grasp of the Spanish Civil War - as well as chilling definitions of fortune and fear. Daniel's photographs leave him with uncomfortable questions amidst shadows of danger. He is backed into a corner of difficult decisions to protect those he loves. Lives and hearts collide, revealing an incredibly dark side to the sunny Spanish city.

Master storyteller Ruta Sepetys once again shines light into one of history's darkest corners in this epic, heart-wrenching novel about identity, unforgettable love, repercussions of war, and the hidden violence of silence - inspired by the true postwar struggles of Spain. Includes vintage media reports, oral history commentary, photos, and more.

Read by Maite Jáuregui, with Richard Ferrone, Neil Hellegers, Joshua Kane, Liza Kaplan, and Oliver Wyman, and with an author’s note read by the author.

"[Sepetys] tells a moving story made even more powerful by its placement in a lesser-known historical moment. Captivating, deft, and illuminating historical fiction." (Booklist starred review)

"Spain under Francisco Franco is as dystopian a setting as Margaret Atwood’s Gilead in Ruta Sepetys’ suspenseful, romantic and timely new work of historical fiction.... Like [Shakespeare's family romances], The Fountains of Silence speaks truth to power, persuading future rulers to avoid repeating the crimes of the past." (The New York Times Book Review)

I've read many books by Ruta Sepetys and loved them all, but this is definitely my new favorite. The history, the story, the intersecting layers made it riveting. I've been living in Spain for the last 10 years and feel I just learned so much about my adopted country. I also loved the narrator!

At first I thought... ohh nooo I picked a boom
I’m not going to like... after the first 2 chapters and I figured out what was going on I was HOOKED! Great BOOK! Sad it ended! Lol

I have loved all of Sepetys other books so I was excited to listen to this one!!! But, it was slow, and long, and many POV which complicated listening, and quite honestly it was a bit boring. The subject matter had such potential!! Not much was accomplished in my mind as far as learning much about Franco and his regime. I never fell in love or felt all that committed to any of the characters. Skipable.

Thoughtful evocative and full of imagery. It sucks you in and changes you so much

I love historical fiction because it brings history to life. Ruta Sepetys has a unique way of blending the fact with the fiction without confusion. As with her other novels, I am now anxious to study the history and learn more about the real events and personal accounts of the individuals who lived it.
Great read!

Who thought that There was more cruelty after Hilter and American Royalty lavished upon it. The fact that Spanish people lost their lives, babies lands that were then sold to America is astounding. A good read!

Never Miss One of Sepetys’ Stories

I’m one of Ruta’s crossover readers. Not a teen by a long shot but an admirer of her ability to weave a compelling story. I especially appreciate her attention to hidden history. This story takes place within my lifetime and I had no idea. Many thanks. The audible production is stellar. Hated to have it end.

So much history and one book

I cannot recommend this book enough. There is truly so much history in these pages it makes you wanna research and help to do good in the world

The narrators perfectly captured an intriguing portrayal of the life in Spain during the Franco dictatorship. Their accents, tones and demeanor reflected the oppression and cloud of hesitancy the people of Spain lived under. I was quickly drawn into the story by Sepetys' dialogues and descriptions of Spain. Loved listening to this book.