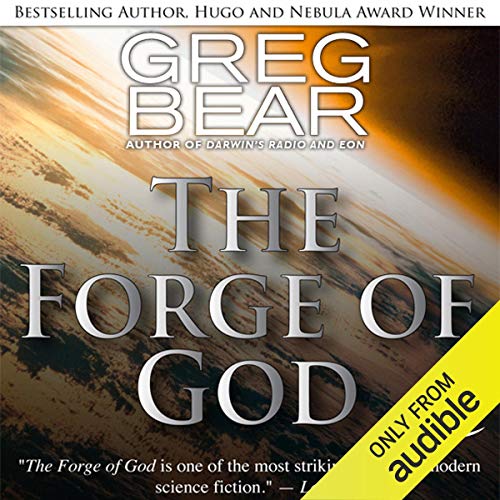 The Forge of God

The Forge of God

On September 28th, a geologist working in Death Valley finds a mysterious new cinder cone in very well-mapped area. On October 1, the government of Australia announces the discovery of an enormous granite mountain. Like the cinder cone, it wasn't there six months ago.

Something is happening to planet Earth, and the truth is too terrifying to contemplate.

I would absolutely recommend this book. Greg Bear does the best job of bringing hard science into speculative fiction of anyone I know. The story never subsumes the science, nor the science the story. VERY satisfying to the head and the heart.

What does Stephen Bel Davies bring to the story that you wouldn’t experience if you just read the book?

The last third of the book is loaded with stuff that would not have changed the story at all if it hadn't been there. Sorry, Greg. If it hadn't been for Stephen's excellent reading, I wouldn't have stuck with it.

I wonder if this book could have gotten published these days. Every story now seems so addicted to "it all works out in the end" that true tragedy isn't really dealt with. I really liked the fact that Greg Bear acknowledged that sometimes the worst case happens. He has a silver lining, all right, but it doesn't eclipse the catastrophe of the event.

Honestly, the last third of the novel was full of things that covered in 20 pages what could have been covered in one. Perhaps when one is Greg Bear, editors are (or were) reluctant to intervene. In any event, one of the advantages of having a good narrator is that his energy can carry you through the slow spots. And I really appreciate that, because the last pages of the story were really worth getting to. I would certainly buy another Greg Bear book, as I've done in the past, and will certainly look for anything narrated by Stephen Bel Davies. Hurrah and thanks to you both. A great yarn.

Thank you audible. I have been waiting years for the audible version of this novel, and am not disappointed. In my opnion this is Bear's best work. A perfect balance of science and drama, with very compelling characters. It builds slowly but brilliantly to its inevitable, terrifying, and heart breaking climax. Though it is bleak in some ways, and frightening, there is the ever present flicker of hope throughout. It is thoughtful, intelligent and haunting... A science fiction classic.

If you could sum up The Forge of God in three words, what would they be?

The narrator is really engaging; he completely brings the story alive. With most books it takes me a little while to get into the story, and this one was no different. But after about 30 minutes or so I was hooked. Very entertaining.

The reader could put a turbometh junkie to sleep

He could have a great career as a children's bedtime story reader or sleep therapist.

I loved the philosophical approach to 'Earth as our home and the center of everything' vs 'the universe as our home and Earth is just a living being trying desperately to mature and spread seeds before time runs out.' The science fiction elements of the story and plot are accessible, good for those who don't read hard core sci-fi. Action is sparse and the author makes a character driven plot tick forward with an increasing urgency. Best I've read in a long while.

This is one of the best sci-fi novels I have EVER READ!

Alien beings bring contradictory messages to the people of Earth. Which are you going to believe?! How can you discover what the truth really is? How should mankind react to these puzzling visitors from another world? How much should you make public? These are questions that some of the Earth's leaders have to ask themselves and the "experts" with whom they consult. The messages the alien beings bring are unsettling, to say the least! And throughout the story, the tension and sense of foreboding builds, but you can't put the book down! You've GOT to find out what's going to happen! You tell yourself it's just a work of fiction, but that doesn't untie the knot in your stomach or let the rest of your body or mind relax. The characters pull you into their world, and their emotions are contagious! You'll feel like you're on an emotional roller coaster ride, if you read this book. It's a gripping adventure into the unknown!

What made the experience of listening to The Forge of God the most enjoyable?

Have you listened to any of Stephen Bel Davies’s other performances before? How does this one compare?

It's a very very good performance. He is very pleasant to listen to and he gave the story a lot of additonal character. in a good way.

Great performance by the reader, story builds and builds to a great ending. Easy to see why this book is on the top 50 Sci Fi books of all time.

Would you try another book from Greg Bear and/or Stephen Bel Davies?

What other book might you compare The Forge of God to and why?

It was difficult to distinguish between characters and their personalities when he was narrating.

Did The Forge of God inspire you to do anything?

I actually purchased the hardcopy of the book and read it because I very much disliked the narration.

Simply not fun. Rarely if ever entertaining.

Would you try another book from Greg Bear and/or Stephen Bel Davies?

I might give Greg Bear another shot someday, but I would definitely not pay for it. Stephen Bel Davies did a decent enough job.

What could Greg Bear have done to make this a more enjoyable book for you?

He could've cut out the tons of superfluous point-of-view characters that were only there to fluff things out, and make the story seem more widespread. They rarely added anything to the story, and their undeserved melodrama just dragged things out and muddled things. "Oh look, here's another person that has no idea about what is going on, and is struggling with their emotions."

The first two acts of the book are a complete waste of time. Incomprehensible aliens mess with humanity's heads for no reason, while the central protagonists heads up a presidential task force that travels all over the world, discovering absolutely nothing.

There are perhaps two interesting ideas in the book, buried under acres of contrived angst. There is no story arc. No character development. Some decent speculation on how one can blow up the earth, and what that might look like. And hours of boredom.

The one where nothing happened, and people were angsty and uncertain about it. Then something semi interesting popped up, and the story suddenly cutaway to another boring character before you could be entertained.

Disappointment. I thought Bear would be better.

Save yourself the trouble and read the plot synopsis on Wikipedia instead. You'll get just as much out of it with out wasting hours of your life.