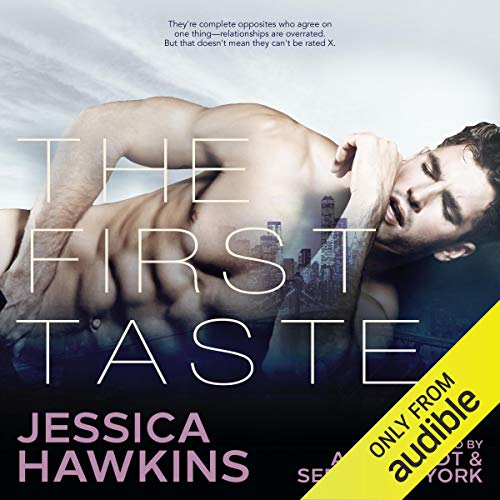 Single dad Andrew Beckwith has already devoted his life to one girl - and as far as he's concerned, she's all he needs. The inked, rough-around-the-edges bad boy left his reckless ways behind six years ago when his daughter Bell was born. When Bell's mother walked out of their lives, Andrew vowed never to let another woman close enough to hurt them again.

Amelia isn't just another woman. She's an independent, smart, and savvy businesswoman who doesn't have time for sex, much less love. In the midst of a drawn-out, bitter divorce, all she wants is to bury herself in work. But when sharp-tongued Amelia and stubborn Andrew cross paths, sparks fly - and burn.

After all, it's not as if opposites ever attract.

"A five-alarm fire of a book that will melt your e-reader...and a father-daughter relationship that will make little hearts pop out of your eyes." (Lex Martin, USA Today bestselling author)

The First Taste can be enjoyed as a standalone or as book two in the Slip of the Tongue series.

GREAT & IT TICKED EVERY SINGLE ONE OF MY BOXES

Neither 32 yr old Businesswoman Amelia or 35 yr old Garage owner/Mechanic Andrew were looking for love, for any kind of commitment or for more than a 'one and done' night together. They are both jaded people who've discovered (the hard way) that love can lead to heartache and lies because both have been burned by it. They are also complete opposites whose explosive chemistry can't be ignored but they are in very different situations in their lives.. Amelia's business is her entire life and Andrew's life is entirely dedicated to his six year old daughter. So what they want is to quell their desires and hopefully quash any lingering feelings that could possibly lead to more.. but, like the book's title, the first taste leads to much more.

It leads to two delusional people who thought they could just walk away after one or two nights having hot sexcapades.. however, it leads to promises of never lying to each other, it leads to a slow simmering build before either one can commit, it leads to angst and drama caused by their returning exes and it leads to a solid foundation to build a new family's HEA on.

I devoured this captivating couple's addictive journey. I loved the well paced emotional and passionate climb, the devoted perfect relationship that Andrew had with his sweet precocious daughter, the often hot sex scenes, the fact that both the h/h experienced character development to let their strong feelings evolve and grow into more.. and I loved the way this dual POV story slowly unfurled to reveal a real gem of a listen.

Worth a credit? YES.. it definitely gave me all the feels I was hoping for - sizzling chemistry, romance, a hot alpha tattooed hero/a strong independent heroine, a smoothly paced well thought out storyline, drama/angst, passion/pleasure, highs/lows, good secondary characters (including Sadie and Nathan from Slip of the Tongue) and perfectly narrated thanks to the well loved duo of Andi Arndt and Sebastian York.

This wasn't the tear jerker that I expect from Jessica Hawkins and it was a nice reprieve! Andrew Beckwith is a single dad to daughter, Bell. He is a good dad, no, a great dad. So great that his entire life is dedicated to his little girl. Amelia is not kid friendly. It's not even in her mindset to take on a single dad. When the 2 meet, they know they couldn't work and could only be a one night stand. We all know where this is headed.

There's so much drama and intensity in this book, I absolutely loved it. It wasn't a book I couldn't put down but it was one I was super happy to start up again. These 2 characters, along with Bell, made me laugh out loud and the love between Andrew and Amelia was so easily believable.

I won't even comment on the narration, it's Andi and SebYo... of course it was perfect!!!

For some reason, I have a fondness for books about single dads. Of course, this book didnt disappoint. This is the first book I've listen to by this author (Jessica Hawkins). I'm definitely a new fan of her writing. The H & H were complete opposites but in the end were perfect for each other. Andrew was a devoted Dad to his little girl named Bell. I adore books that include little kids in them. Bell was precious and made it impossible to not fall in love with her. Bell's mother left them when she was a baby and they haven't heard from her in 4 years. This is the catalyst of why Andrew has no intentions of ever falling in love again. The heroine Amelia is focused on her company and is dealing with a divorce from a horrible marriage.
The first encounter between H & H doesn't start of well regardless of the undeniable sparks felt between them. Andrew & Amelia are opposites in every way but they can't deny their attraction to each other. Thus begins an arrangement that's doomed to fail especially since neither can follow their only rule.....No Falling in Love!! Overall, I enjoyed this book a lot. I was worried I was going to get bored or lose interest since the plot reminded me of other books I've read. Fortunately, my worries were unwarranted. The book held my attention from beginning to end. If your looking for a smexy, witty, little angst & drama, sweet book that includes a much deserved HEA than I highly recommend this book for you!

I really enjoyed this story it's was just hot enough to keep my attention with great great narration. I really did appreciate that when I was sure one thing would happen it would go it a completely different direction. It was not a predictable romance. LOVED IT. Worth the credit

Jessica Hawkins does it again! What is 'it?' A hot, steamy romantic story performed by a dynamic duo in Andi Arnt and Sebastian York (more on them later.)

Hawkins creates a an interesting plot and immerses it in a spicy sauce. It is absolutely yummy. I did not want to stop listening and fortunately, I had the luxury of listening to the whole thing in two sittings!

Amelia and Andrew meet up when Andrew stops by to visit his sister at work. (He is dropping his 6 y/o daughter off.) Amelia is Andrew's sisters boss. She is the minority owner in the business she created and is a career driven woman. Her high-end fashion business in New York City and her divorce proceedings are her life. She makes no room for anything or anyone else.

Andrew is a busy guy. Raising his six-year-old daughter and running his automotive shop in suburban New Jersey leave him with little time on his hands. Andrew has an understanding with one of his female friends whenever he needs female companionship.

When Andrew and Amelia cross paths at her office he practically dares her with a one night proposition. She accepts, but is one night going to be enough?

Jessica Hawkins is one of my favorite authors. She generously gave me a copy of her first book: Come Undone: The Cityscape Series Book 1 to review. I have been a fan ever since, devouring the five books she's written that are available on audio. As soon as I finish one, I cannot wait for the next. She cannot write them fast enough for this listener.

Andi Arnt has narrated all of Hawkins books. She is one of my top three favorite female performers. Sebastian York is a great addition (for dual narration) with his deep sultry voice. The three together, Hawkins, Arnt &amp; York are a listeners dream to die for. I rarely give five-star ratings, but this book and its performers deserve 10 :-) Excellent!

I will never tire of Jessica Hawkins writing and I am already looking forward to Yours to Bare – release just a week ago. I only have one question… What is next and when will it be available?

*I agreed to leave an unbiased review for this book in exchange for this copy.

IMPORTANT: While this copy was free, I have purchased copies of Jessica Hawkins other books as gifts. They are all definitely credit worthy and/or worth full MSRP.

This book is a standalone, no loose ends or cliffhangers.

I recommend any of Hawkins books without reservation. However, I suggest that if you begin the Cityscape Series, you read that trilogy in order.

I hope that you will take a moment and select – yes – below if you found this review helpful. I invite you to consider following me here on Audible to get my most recent reviews. Thank you.

Now this is what a true romance feels like. I love how two heart broken people who agree on no commitment end up putting themselves back together. To keep is simple, the story is real and plausible, yet very different from other books. I love how the author started the book off with lust but slowly built a relationship that had trust, love, healing, humor, friendship and eventually HEA. A strong story with two of my favorite narrators... best 10+hrs spent on this book!

What I liked the most is that it finally came out on audio. Jessica is just one of the best writers out today. To many great parts to single any out but, I really like the epilogue 😊 and the narrators were great to. Love Andi more audio books please

I think this is a pretty typical type of romance book, one that I've read but by different authors. Although I love Sebastian York and Andi Arndt this wasn't one of the better stories I've listened to but only because I feel like I've read it already. It took a few chapters to start enjoying this book which is why I gave the story a 3. But I think because the narrators do such a good job they continue to draw me in to the end.

This book has a decent plot idea and it checks the boxes as a modern romance novel but it was just soooooo unnecessarily long. Clearly the fill was there to make a 7-hour book into a 12-hour book. York and Arndt did a masterful job with some pretty darned thin sections, but this was definitely a bit of a slog.

I finished it, but I can't bring myself to recommend it.

the ending was okay but a little predictable

this book was just okay but wasn't a real page-turner. A little bit predictable. The sex scenes were a little bit S&M and they are curved a little early on in the book and there wasn't much build-up

LIKE WTF??? She is not a dog!! Thou her being a constant b*tch doesn't help the matter....

Andi Arnt and Sebastian York are simply the perfect match. ❣❣❣ enjoy every story from the first to the last second.

I loved the story

I really loved the story, but sometimes it was a little bit to long... ;-)
Sebastian and Andi are great together. ;-)