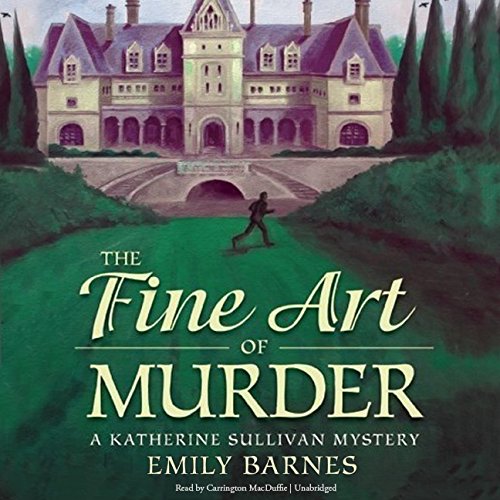 The Fine Art of Murder

In this charming and smart series debut, retirement isn't all it's cracked up to be.

Former police chief Katherine Sullivan has been called brilliant, brave, compassionate, and quirky, but after decades of crime fighting, this resilient grandmother with an artist's soul is discovering that retirement can be just as deadly as being on the job.

When Katherine returned to her hometown, her only thought was to comfort her recently divorced daughter. That was before a young woman was found murdered on the estate of the town's richest family. Now, in order to track down the killer, Katherine must uncover the generations of secrets that at least one person has already killed to protect.

3 of the characters are irritating enough to make the reader want to end this book asap. The female protagonist is a retired police chief who seems to think it's not idiotic to insist she's invincible & doesn't need assist...it would be nice if there was some wisdom evident in a woman w/her background & age. Her daughter & granddaughter are both beyond whiny. Too much family information - not interesting in the least.

What kept me interested was the stolen art. Did it exist? Where was it hidden?

What does Carrington MacDuffie bring to the story that you wouldn’t experience if you just read the book?

Do you think The Fine Art of Murder needs a follow-up book? Why or why not?

No follow up. This protagonist is more frustrating than interesting.

you're 8-14. I can't remember I've graded a book so low, but this one deserves it. Think Nancy Drew. I put the performance a 2 because I can't determine if the narrator is this bad or if she's aiming to read at the 8-14 level. If she is, I give her a 3. Thank goodness I can retrieve my credit.

editing could have been sharper

i thought this was a good story but the editing could have been sharper. Nice job by narrator.

This book was not at all what I was expecting.

I did not like the book. The book was not poorly written I just didn't like the story.