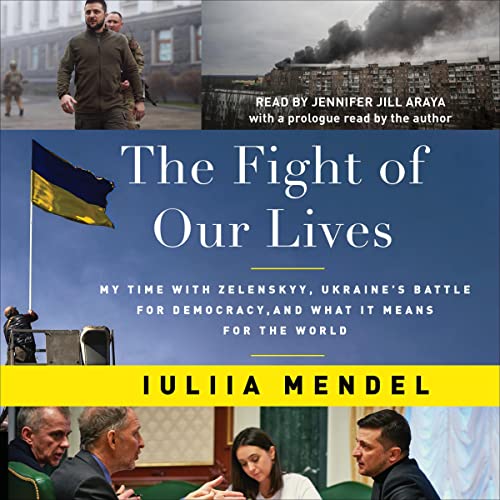 The Fight of Our Lives

When Ukrainian journalist Iuliia Mendel got the call she had been hired to work for President Volodymyr Zelenskyy, she had no idea what was to come.

In this frank and moving inside account, Zelenskyy’s former press secretary tells the story of his improbable rise from popular comedian to the president of Ukraine. Mendel had a front row seat to many of the key events preceding the 2022 Russian invasion. From attending meetings between Zelenskyy and Putin and other European leaders, visiting the front lines in Donbas, to fielding press inquiries after the infamous phone calls between Donald Trump and Zelenskyy that led to Trump’s first impeachment.

Mendel saw firsthand Zelenskyy’s efforts to transform his country from a poor, backward Soviet state into a vibrant, prosperous European democracy. Mendel sheds light on the massive economic problems facing Ukraine and the entrenched corrupt oligarchs in league with Russia. She witnessed the Kremlin’s repeated attacks to discredit Zelenskyy through disinformation and an army of bots and trolls.

Woven into her account are details about her own life as a member of Zelenskyy’s new Ukraine. Written with the sound of Russian bombs and exploding shells in the background, Mendel details life lived under Russian siege in 2022. She says goodbye to her fiancé who joins the front lines, like so many other Ukrainian men. Throughout this story of Zelenskyy, Ukraine, and its extraordinary people, Iuliia Mendel reminds us of the paramount importance of truth and human values, especially in these darkest of times.

Luliia Mendel's book "The Fight of Our Lives: My Time with Zelenskyy..." is a clear eyed look at the rise of not only President Zalenskyy but the emerging proud identity of the Ukrainian people. It shines a light of the inner dialogue of Ukraine as the country emerges from the dark paralysis of the former Soviet Union. The author brilliantly walks the reader through the country's recent history and its battle with Russian oligarchs and propaganda. It not only reveals the struggles and victories of the country and its president but also of a young girl growing up in a now independent Ukraine as she grows into a skilled journalist, spokesperson and advisor for her country and her president. This book is more than a recounting of the history of a country and its recent war, but a heart felt view from the inside out by one who has lived through it all and has helped form the new and proud narrative of Ukraine

very detailed story. of last 33 years in Ukraine. quick and easy to learn. try it.

Always looking for ways to directly support Ukrainians rather than trust too much agencies like the IRC, or Paypal payments to unknown email addresses, I bought the audible version without caring about whether the book would be any good or not. I will confess after a few days, as I waited for its release, I began to get concerned that maybe, like in all wars, that the authors was being opportunistic. But, I have just finished listening to the audible book and I am grateful for the following reasons.

First, technically, there are no translation or production issues. I heard everything and could follow the flow of the discussion perfectly.

Second, I am grateful, because since the invasion of Ukraine I have learnt much more about the circumstances and had questions about for example a) why was Zelensky popularity beginning to fade just before the invasion and b) what is the deal with Porrishenko. I recommend the book if only to learn about item "b", if one so cares. I think the book explains what Zenlensky had to deal with after he was elected and while the author probably could be said to be understandly biased she explained fairly well the context of the situation ...not wanting to give away too much because I think if a person cares then they owe it to themselves to read the book.

Another take away for me was understanding Oligarchs as a sociological phenomenon. We "westerners" have been conditioned to see them as individuals, but in reality they take many forms, principally in the west as the guise of corporations. How many corporations use their wealth to monopolized their markets and rates in the west.

The author is tech savvy, but I disagree with her assertion that being such is a function of a person age, except in a very general sense that Millenials are more embracing of social media and understand its potential and shortcomings (i.e. the weaponization of said). I doubt many Millennials understand that "the cloud" is in a way is like the movie "Back to the Future" where keyboards and monitors were essentially dumb terminals.

I am from a small country and now live in the country that overshadowed my country in every way. We also dealt with language issues but not like what was described in the book. Nevertheless, I am grateful the author went over the nature of language issue between ruzzia and Ukraine.

In summary, the book will give a person, a rounder understanding of many of the issues that Ukraines have always faced and are facing.

She’s like me or any American political person, we see things the same way,I kept saying “me too” listening to her. I’m a 🇺🇦🇺🇸so I implore all English speaking Westerners our age to see how much we have in common with Ukrainians. They are incredible people. I love Zelenskyy and I loved this book, I could really relate as a professional. Read it

This was part memoir, part autobiography and a small part about the fight in Ukraine. Meh. There are better books about the why’s and wherefores of the battle.

I greatly appreciate the historical background Iuliia Mendel provides. As an American, the recent history of Europe is something of a file cabinet of facts that has been dumped on the floor for me to sort. Iuliia Mendel does a great job of imparting the relevance-- to my life and my children's lives-- of recent history that has happened and is happening far away.
I'm glad she read some of it herself.
Bravo!

Both fascinating and moving


It is both fascinating and moving to listen to the story of the author about the country that she loves. A must read!

Great story in an okay book.

I sympathize with Ukraine's cause and I am sure Iuliia's next books will be better. This was an okay start.

Sollte eher "The Fight of my Live" heißen

As a german it lifted alot of the fog of information war russia layed upon us all.