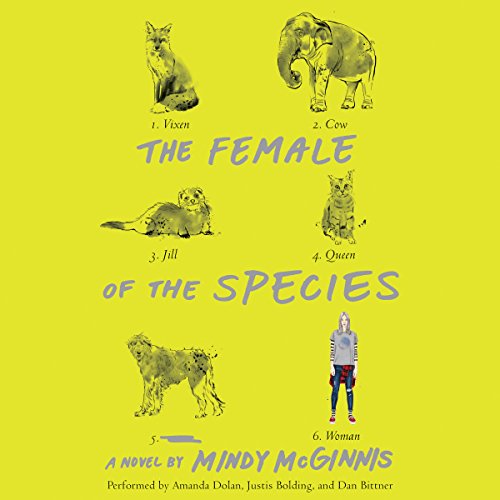 The Female of the Species

The Female of the Species

Alex Craft knows how to kill someone. And she doesn't feel bad about it.

Three years ago, when her older sister, Anna, was murdered and the killer walked free, Alex uncaged the language she knows best - the language of violence. While her own crime goes unpunished, Alex knows she can't be trusted among other people. Not with Jack, the star athlete who wants to really know her but still feels guilty over the role he played the night Anna's body was discovered. And not with Peekay, the preacher's kid with a defiant streak who befriends Alex while they volunteer at an animal shelter. Not anyone.

As their senior year unfolds, Alex's darker nature breaks out, setting these three teens on a collision course that will change their lives forever.

This book is a hot, fever-sick punch in the gut

And it's exactly what our society needs and deserves. Alex Craft is the repulsively attractive love child of rape culture and patriarchal dominance run rampant. She holds up a mirror to not only our society, but to us as individuals, and most of us won't like what we see. This book is about recognizing the monster within us, but also coming to terms with exactly how it got there in the first place. It's about owning up to all of the problems that we either directly caused ourselves, or that we allowed to fester while we stood by watching the infection slowly take hold, because fighting it is hard, and it's easier to become complacent and turn a blind eye until it affects you in a way so real and direct you can't ignore it anymore. That moment, that's the moment we begin to sympathize with the monster. That's the moment we can no longer judge her, because we wish we could be her. Wish we could do the things she does. Little do we know, until the end, how much of a monster we already are, and how, compared to us, Alex Craft is a saint. At the end of this book, I was completely destroyed. Not because of what happened, but because of how disgusted I was to see the monster out of its mask. Not Alex, but us.

Alex and PK are the best example of what power friendship can have in a persons life. This is an amazing story and I don't say that very often. Alex who has lost so much reminds us all of dignity and basic niceness. This is a complex and dark story that completely caught me off guard. The what? To who? OMG!! That along with a couple of snorts at great quips and behavior insight.

Listen or read this book. You wont be disappointed

There were parts in the book which were hard to hear meaning I was sensitive to but I know there is a harsh reality to it. If you are sensitive to treatment of animals, rape , or curse words then this might not be a book for you. I thought the book addressed some important issues and put it out there to discuss which I like... No matter how difficult it is to hear/read about it.

Really enjoyed this book and I'm not easily impressed as I listen to a book a week and often struggle to find something unique and compelling.

All I can say is wow... wow that book was a hard pill to swallow, but one that needs to be told. It was uncomfortable, hard to hear, one to make me cry. But if only we could all be so smart to listen and learn. Credit worth even though it's a subject you can't like.

So deeply moving and profoundly painful, but also very well written. It's a young adult story with very real content. It's something every human needs to know about "rape culture" and loss and depression and vulnerability.

Mindy McGinnis gets in there and exposes all of us. The "sluts", the "nerds", the "jocks", the humans. Exposes how one choice can change not just a life, but a world. How trauma is real and lasts. How thoughtlessness and indifference are each actions. Wowwy. I'm blown away by her insight but really moved and astounded by her voice. It's new to me. And I like it.

Very well written and narrated. no annoying female leads. I couldnt stop listening. was sad for the end. would have liked a sequel

I get what the author was trying to do with this plot wise but I felt like the majority of this book dragged.The ending of this was very hard to get through.

Give it a try. such an important book. absolutely captivating. (triggers: murder, se*ual assault, animal abuse)