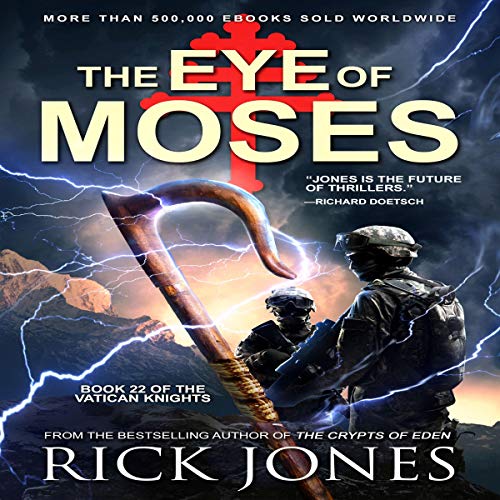 The Eye of Moses

In France, a member of a secret guild is killed for the secrets he keeps.

In Croatia, a stronghold is breached, and a treasure is stolen.

At the Vatican, a corrupt pontiff views Kimball Hayden as a threat to his rule.

When a Croatian stronghold is breached and scores are killed, a religious icon is stolen that contains a dark particle that’s powerful enough to either create worlds or destroy them. It is an element so strong and deemed so uncontrollable, that a group known as the Shadow Klan wants to harness its power to create a weapon of mass destruction that is so great and should they succeed, they would hold the scepter of global rule. Superpowers would fall under their dominance and their decrees with the broken wills of world leaders surrendering to bended knees.

With a corrupt pontiff who sees Kimball Hayden as a threat to his power, Pope Clement XV mobilizes the Vatican Knight without his team to retrieve the dark particle known as the Eye of Moses, in hopes that this will lead to Kimball’s ultimate downfall.

Forced to work in tandem with a guild known as the Consortium Group, Kimball Hayden quickly discovers that the Shadow Klan is the most notorious enemy he has ever faced in a high-stakes game where the consequences are enormous and the chances of succeeding are small.

Without the Vatican Knights by his side, will Kimball be able to retrieve a treasure that contains the power of Providence? Did Pope Clement XV wittingly set Kimball up to fail? Or will he forever take residence within the Darkness that he has lived in for so long without hope of redemption?

From the author of the national and international best-selling series, Rick Jones once again weaves another tale of adventure and nonstop action.