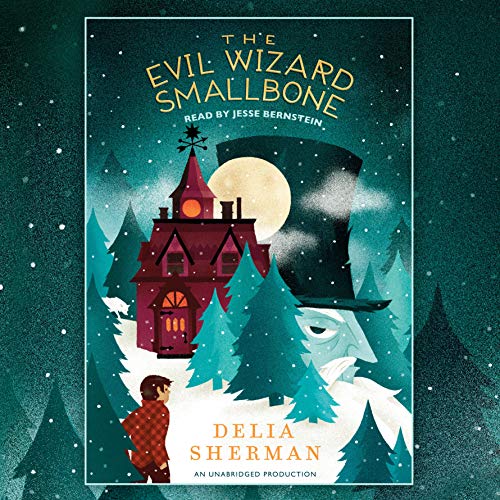 When 12-year-old Nick runs away from his uncle's in the middle of a blizzard, he stumbles onto a very opinionated bookstore. He also meets its guardian, the self-proclaimed Evil Wizard Smallbone, who calls Nick his apprentice and won't let him leave but won't teach him magic, either. It's a good thing the bookstore takes Nick's magical education in hand, because Smallbone's nemesis - the Evil Wizard Fidelou - and his pack of shape-shifting bikers are howling at the borders. Smallbone might call himself evil, but compared to Fidelou, he's practically a puppy. And he can't handle Fidelou alone.

What a fun book! When I saw it sitting in the bookstore I work at, I knew I just had to read it and it turned into quite the romp. To be honest, It’s not the type of book I think I would normally pick up on a whim, but it was worth every second of listening... i enjoyed the pleasant mix of modern day with fairy tale, and you can’t help falling in love with the characters... you get frustrated with and at Nick (whose the MC), and you can’t help getting attached to Zachariah Smallbone and his Evil Wizard Bookshop. I give it a solid 4 out of 5 stars... Because it was fun and enjoyable and I loved it, even if it wasn’t my favorite kind of read. It was still DEFINITELY worth it!!!

It's so much fun!

I picked this title mainly because of the narrator. I'd read the Percy Jackson series and just liked his voice, and it didn't disappoint. This is such a fun story. I'm not the target demographic but even as an adult it's a very fun book. Id recommend it for anyone but if you're trying to find something for a kid this is a great story!

American mythmaking at its best!

If Steven King and Neil Gaiman set out to write Harry Potter, this is where they would end up.

The narration is excellent, the story and setting engaging, and it flies by. Great car trip material, especially with kids.

I'm glad I gave this book a chance

Thank goodness for local libraries. I almost didn't read this book. From the review complaining about the boy's bad attitude and "cussing" I wasn't sure if I wanted to own the book. I found it at my library and gave it a chance. I enjoyed the book so much I came straight back to Audible to buy it.
The worst cuss word is, cover your ears children, blubberhead.
Yes, the kid has a bad attitude and is a liar, he ran away from an abusive home! The main character has room to grow and change.
And the evil wizard is a grump, is anyone surprised?
The book reminds me of the fairy tales I read growing up, but with this book I got to spend more time with the characters. Everyone was more fleshed out than the characters of a fairy tale.
I am glad to have this book in my library.

really? constant belittling, sarcasm, criticism, and sweat words. just because the swearing is considered the "mild" words doesn't mean I want to have my head full of it! becomes worse as the story progresses.
worst of all, it's the protagonists of the story using such! we're supposed to somehow like the bully and his self- serving apprentice (the chief protagonist of the story)