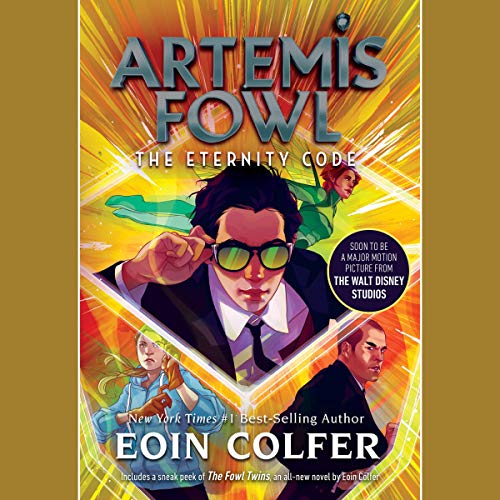 After being held prisoner for years, Artemis Fowl's father has finally come home. He is a new man, an honest man, much to Artemis's horror. He makes his son promise to give up his life of crime, and Artemis has to go along with it. But not until he has completed one last scheme.

Artemis has constructed a super-computer from stolen fairy technology. Called the "C Cube", it will render all existing human technology obsolete. He arranges a meeting with a powerful Chicago businessman, Jon Spiro, to broker a deal for the C Cube. But Spiro springs a trap, steals the C Cube, and mortally injures Butler. Artemis knows his only hope of saving his loyal bodyguard is to employ fairy magic; so once again, he must contact his old rival, Captain Holly Short of the LEPrecon fairy police.

It is going to take a miracle to save Butler, and Artemis's luck may just run out.

"The kid's still got it...Harry had better watch his back." (Entertainment Weekly)

"Readers will burn the midnight oil to the finish." (Publishers Weekly)

"The action is fast and furious, the humor is abundant, characterizations are zany, and the boy genius works wonders, all of which add up to another wild ride for Artemis' fans." (Booklist)

I hope this isn't the end!

I have loved the entire collection. If you liked the first two, this one is a guarantee. I won't ruin it for you, but this ending is great! Don't think about it, get it! And if you haven't read the first two, stop, go back and start with Artemis Fowl. You just can't start here, and you wouldn't want to. The first two are necessary reads to get the most out of this one, and true delight to read to boot.

This book definitely made me laugh, quite a bit. All the Artemis Fowl books are hilarious, and this one is no exception. I know that they are supposed to be kids books, but they quite enjoyable even if you're an adult! The plots of kind of light weight but the characters really make the story.

This is another one of eoin colfer's masterpeices. All of the Artemis Fowl books are superb. Adults and kids will love this book. A great mix of fantasy, sci fi, and reality. Artemis is a great charachter.

More popcorn goodness from the series of the boy genius. I am extremely entertained by monologues and tense conversations by the protagonist.

They could have chosen a better narrator.

Would you consider the audio edition of The Eternity Code to be better than the print version?

I have both, and bought both so that my son could listen and read at the same time. The print version and the audio version don't match up (One is British English, the other is American English). If you are using one or the other it probably wouldn't matter. Together for a child, it might be a little confusing.

Mulch Diggums is my favorite character. He's just so gross it's funny!

What aspect of Nathaniel Parker’s performance would you have changed?

I think that he needed to do 2 major things to improve his performance. 1. He needed a better American accent. 2. I would like to see more difference in each character's voice. I really don't think that Artemis' voice should have been so deep.

It was a fun book. Artemis Fowl never disappoints!

As with the first two books this one does not disappoint. Fun book, fun series.

As a mother of very young children, I'm always on the hunt for books that interest me, yet are kid friendly. (no cussing, vulgarity, etc) The Artemis Fowl books are wonderful. Yes, they are technically children's books, but they definitely have enough depth and plot to interest adults. The narrator does an excellent job, and is one of the few I really enjoy. Beware- the fifth Artemis Fowl book has a different narrator. I didn't read any of the reviews before buying it and I really wish I had.

Nathanial Parker was perfect for this book! I would have given more stars if I could.

Great for Adults too!

Great book made even better by Nathaniel Parker's narration. It is Jim Dales quality of work.