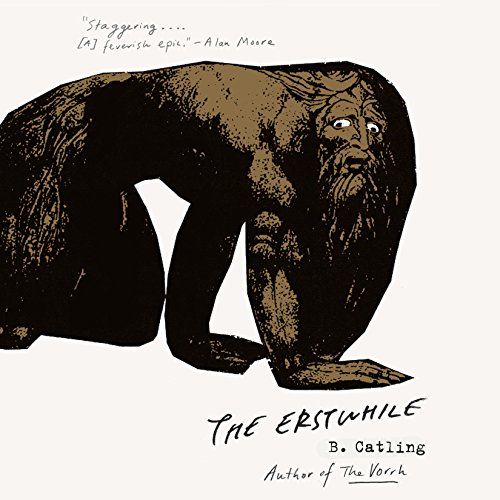 The Erstwhile brings listeners back to the singular world and mind of B. Catling, continuing the groundbreaking storytelling of his hit The Vorrh.

In London and Germany, strange beings are reanimating themselves. They are the Erstwhile, the angels that failed to protect the Tree of Knowledge, and their reawakening will have major consequences.

In Africa, the colonial town of Essenwald has fallen into disarray because the timber workforce has disappeared into the Vorrh. Now a team of specialists are dispatched to find them. Led by Ishmael, the former cyclops, they enter the forest, but the Vorrh will not give them back so easily. To make matters worse, an ancient guardian of the forest has plans for Ishmael and his crew. Meanwhile a child of mixed race has been found abandoned in a remote cottage. Her origins are unknown, but she has powers beyond her own understanding. Conflict is coming, as the old and new, human and inhuman are set on a collision course.

Once again blending the real and the imagined, The Erstwhile brings historical figures such as William Blake and places such as the Bedlam Asylum, as well as ingenious creations such as The Kin (a family of robots) together to create unforgettable novel of births and burials, excavations and disappearances.

“Epic...emotionally gripping...dreamlike.... Catling weaves alternate history and retroactive mythmaking into a stunning whole.... He’s succeeded at writing a more balanced - and if this can be believed, slightly more conventional - novel this time around, which also bodes well for the trilogy’s upcoming finale, The Cloven. At the same time, The Erstwhile doesn’t depart radically from the devastating scope and dark spectacle that made The Vorrh one of the most arresting fantasy debuts in years - or Catling one of contemporary speculative fiction’s most imaginative writers.” (NPR.org)

“A dazzling psychedelic quest...viciously surreal.... The Erstwhile almost revels in its status as the hiatus between Genesis and Apocalypse. It applies the sleight of hand that many of the best middle-books do, for a shift of focus.... William Blake makes an appearance, as do Yiddish theatre, guillotines, radios that transmit from the future, premonitions of Shoah on Brick Lane, and a Ripper rumour. Some of this is part of a shared mythology of English esoterica. It’s no wonder that Sinclair, Alan Moore and Michael Moorcock have enthused over these books: Catling is using the same raw materials they do, but in a different manner.... Even in the most extreme moments Catling has an eye to the wry, to the momentous absurdity of just being a thing made of flesh in a world that is not.” (The Guardian)

“Brian Catling’s The Erstwhile, like the work of Mervyn Peake, is outside genre. The stand-alone centre novel in a three-decker, it is even better than The Vorrh, the volume that preceded it.... Again we meet a variety of wonderful, often bizarre characters.... The plot is complex, monumental, engrossing and crammed with original images. If you like Peake’s Titus Groan, Catling’s splendid novel is probably for you.” (Michael Moorcock, The New Statesman)

More of Something That's Never the Same

Picks up right where The Vorrh left off and is the perfect bridge to The Cloven, the final book in the trilogy. This series is one of the most beautifully written that I've ever read. B. Catling is like David Lynch, Frank Herbert and Samuel Beckett rolled into one. If you love the english language, this book is for you. The narration is second to none. I'll be searching out more books read by Allan Corduner.

I enjoyed Vandermeer's exploration of "Area X." I attribute this to my early life in a estuary. I spent alot of time alone in the natural environment. "The Vorrh" was recommended to me. I read it. There was alot to work with for the remaining two books of the trilogy. I would have preferred it if the book never ventured to London and the story remained at ground zero. I would have preferred a greater emphasis on biology than religion. This just isn't something that appeals to me. If you are fond of alternate genesis stories, or historical fiction or "Our angels are different than yours" this may be what you are looking for. best luck.