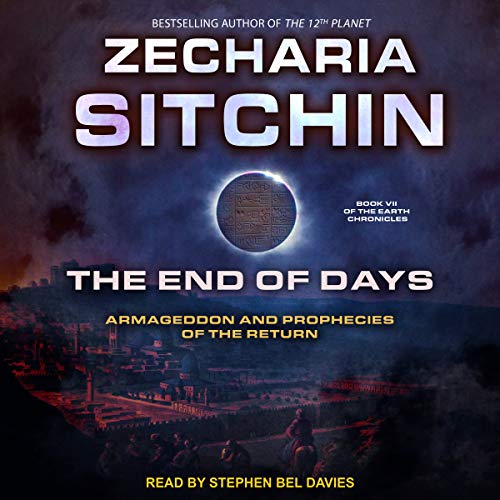 The End of Days

Why is it that our current AD 21st century is so similar to the 21st century BC? Is history destined to repeat itself? Will biblical prophecies come true, and if so, when?

It has been more than three decades since Zecharia Sitchin's trailblazing book The 12th Planet brought to life the Sumerian civilization and its record of the Anunnaki - the extraterrestrials who fashioned man and gave mankind civilization and religion. In this new volume, Sitchin shows that the end is anchored in the events of the beginning, and once you learn of this beginning, it is possible to foretell the future.

In The End of Days, a masterwork that required 30 years of additional research, Sitchin presents compelling new evidence that the past is the future - that mankind and its planet Earth are subject to a predetermined cyclical celestial time.

In an age when religious fanaticism and a clash of civilizations raise the specter of a nuclear armageddon, Zecharia Sitchin shatters perceptions and uses history to reveal what is to come at the end of days.

I really hope they the add ons to this series.

without a doubt the most relevant, important and information rich series, that anyone can keep up with (if u treat it like your favorite college course!). at least 7 topics of dispute, have been proven/observed since his death in 2010. you can believe what you want about each myth, but what matters to me is this man translated and researched the hell outta sumer and I trust his accuracy. history is written by the victors. he didn't write history he just told us what the hell they wrote and gave compelling arguments to support it, so we might stop looking at it as make believe. I'm super down with Sitchin, RIP!

The revelations in this book legitimately sew so many concepts together and answer questions raised in books prior definitely the best! This book made me understand why the succession of Jesus was so important from an historical perspective and may change your view of many of the ancient churches... and not in the way you would think.

The sixth book in the Earth Chronicles series attempts to answer the key question of when will the Annunaki return. It is well narrated by Stephen Bel Davies, who is a joy to listen to.

tough to take in all the details in an audiobook. will definitely reread with further study.

must read! not the end, only the beginning.

loved it
moved fast like most Sitchen books. classic narrator and the best way to listen.

This book reconnects us to our true missing history. The insight and knowledge Sitchin provides is astonishing and may have you questioning your beliefs, I know I did.

The perfect end to a knowledge masterpiece.

Every time I buy another book to read further into Stichens series I think to myself I'm wasting my money theirs no way he could offer anything more to the story and my minds blown by mid way threw the 1st chapter. These books should be taught in schools.

Sitchin was a Sage

As with each book in the Earth Chronicles series, this book is worthy of an immediate re-listen!

Always informative and inspiring. Sitchin's analysis and insight makes a lot more sense than many others.

looking forward to the next book, Sitchin has uncovered the truth of mankind's beginning. Fantastic!