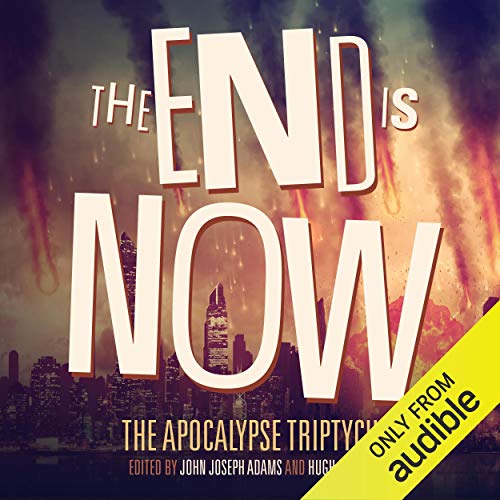 The End Is Now

Famine. Death. War. Pestilence. These are the harbingers of the biblical apocalypse, of the End of the World. In science fiction, the end is triggered by less figurative means: nuclear holocaust, biological warfare/pandemic, ecological disaster, or cosmological cataclysm. But before any catastrophe, there are people who see it coming. During, there are heroes who fight against it. And after, there are the survivors who persevere and try to rebuild. "The Apocalypse Triptych" will tell their stories.

An enjoyable collection of tales well worth listening to. I repassed some of them more than once which I only do when I enjoy the story.

There are no happy endings here. Only small victories and shattered dreams. Like its predecessor, not all stories and narrators are equal. Still worth listening to, if you like thought provoking stories.

Loses a star because the last story is That Bad.

Excellent idea and overall excellent follow on to the first book. A couple of stories didn't quite fit the "co" part, more post apocalyptic. The standalone stories were good additions.

It *mostly* was. The two things I noticed were (1) these stories didn't really follow the theme of series as well as those in the first book - there were some great stories that really didn't have much to do with a 'the world is ending' anthology. (2) the readers were REALLY all over the place! Some were really good, and some were so awful I just couldn't listen to that story.

What other book might you compare The End Is Now to and why?

There are a couple other apocalypse theme anthologies on Audible, but really, it's compares well with any sci-fi story collection.

Did The End Is Now inspire you to do anything?

I may start saving more canned food and fresh water .. :-)

i skipped her story in the last book and skipped it in this one as well. She sounds like she's in 7th grade reading her creative writing essay about something super serious. She is monotone and boring as f. it sent me into a small fit of rage last book and I angrily exclaimed when she was the first stinking narrator in this one. Come on!

(will update review with more on other aspects soon)

I am afraid to say, this was a major disappointment after the first two books, which I read and loved. It didn't keep my attention, I couldn't hear it in "colors", which comes with a book you are immersed in. Anyway, just my thoughts.

Loves all 3 of these.

More please!! I love the short stories. They are very hard to come by. I have all 3 audio books. I’m patiently waiting for more.

loved it. will be reading the third one! all the stories were great except one

(Same review posted for all three books) This was a great anthology of stories. I wish I had realized that the following two books were continuations or expansions of the stories in the previous book sooner than half way through the second book. I think it took a story I was really invested in in the second to jar my memory back to the first. I re-listened to several of the stories in the first book to follow the story along and bought the third book because I really wanted to see how they ended. I definitely recommend these for anyone that likes end of the world fiction but doesn't have the time to listen to 6 or 13 hours.

Part 2 of the Apocalypse Triptych

Not as strong as the End is Nigh, but then again it's harder to review a collection of stories, as some will always resonate with us better than others.

Anyway, if you enjoyed the first book at all, you'll definitely enjoy this one, but maybe to a greater or lesser degree depending on which of the individual stories really captivated you.

If you've not read the End is Nigh, that's okay---none of the stories that are sequels need to have their prequels read first. Rather than being direct sequels (for the most part) they are stand alone stories that happen to take place in a sequential order within a given setting.

Very solid continuation of the trilogy.

What made the experience of listening to The End Is Now the most enjoyable?

Most of the writers who contributed pieces to the first in this series continued those stories here in the second; often those stories picked up decades later and were told from the POV of completely different characters, though, which had a lot of impact on which stories continued to interest me and which didn't.

Yes-- most of these narrators are excellent, though Stephanie Grossman reads like a sixth-grade student called upon to read aloud from a chemistry textbook. She is laughably horrible as a narrator. My 9yo granddaughter could inflect more emotion and interest.

"Makes a simple nuclear winter look like a day at the spa."