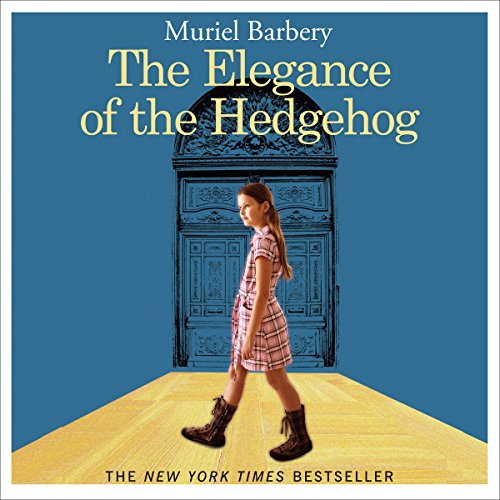 The Elegance of the Hedgehog

The Elegance of the Hedgehog tells the story of a life spent in hiding. Madame Michel is the concierge of a luxurious Parisian apartment building, tending to the plants, signing for packages, and polishing the brass, retreating when she can to her rooms on the first floor. She keeps a television blaring where the tenants can hear it; she zealously polices her speech and gestures to keep from giving herself away. What is the secret she hides? Madame Michel is an intellectual. She knows Kant, but she's separated by class from other people who do, so she discusses his work with herself while we listen in. Her musings are voiced by Barbara Rosenblat, who lends an air of theatrical irony  an auditory raised eyebrow  to her descriptions of class blind spots and philosophical rabbit holes.

The other pole of the story is Paloma Josse, a 12-year-old tenant in the building, voiced by Cassandra Morris with an appropriate measure of sarcasm and outrage. Paloma is a wildly precocious girl raised in privilege who has all the gifts of intellect and all the faults of a pre-adolescent. She's grandiose  she favors us with excerpts from a journal titled "Profound Thoughts". She's happy to throw stones at glass houses, and even plans to burn hers down, with the aim of teaching her family a pithy lesson about deprivation. She describes the currently deprived in terms that, while well-intentioned, condescend and distort. She is, in other words, a burgeoning intellect in serious need of the influence of an adult she can respect. An adult, perhaps, like the 54-year-old concierge on the first floor. But it takes more than a ride in an elevator to truly meet a woman who has spent her life in hiding. The novel takes two world views, both meticulously constructed from sound philosophical materials, and happily pulls them apart. Rosalie Knecht

An enchanting New York Times and international best seller and award-winner about life, art, literature, philosophy, culture, class, privilege, and power, seen through the eyes of a 54-year-old French concierge and a precocious but troubled 12-year-old girl.

Renee Michel is the 54-year-old concierge of a luxury Paris apartment building. Her exterior (short, ugly,and plump) and demeanor (poor, discreet, and insignificant) belie her keen, questing mind and profound erudition. Paloma Josse is a 12-year-old genius who behaves as everyone expects her to behave: a mediocre pre-teen high on adolescent subculture, a good but not outstanding student, an obedient if obstinate daughter. She plans to kill herself on the 16th of June, her 13th birthday.

Both Renee and Paloma hide their true talents and finest qualities from the bourgeois families around them, until a wealthy Japanese gentleman named Ozu moves into building. Only he sees through them, perceiving the secret that haunts Renee, winning Paloma's trust, and helping the two discover their kindred souls. Moving, funny, tender, and triumphant, Barbery's novel exalts the quiet victories of the inconspicuous among us.

The huge plot twist at the end is truly amazing. The beginning though, I feel like, has too much description.

I would not have had the patience to read this book with my eyes. I used it as a companion for pulling weeds and I must report that the garden and I are both the better for it. It was a very good listen. I'll not forget these characters anytime soon.

This is an absolutely charming and wonderful book that I'll be recommending to lots of people. It is told in the first person by two narrators, both of whom are very intelligent intellectuals who are constantly evaluating the psychological and philosophical nuances of everything. While that sounds like it could be unbelievable dull, it isn't. I laughed so hard at one point, I had to stop the recording.

Cassandra Morris is very good, but Barbara Rosenblatt gives an award winning performance. It is one of the best narrations I have heard not just from Rosenblatt, but from anyone.

Delightful rendering of a wonderful set of characters. Provocative in its reflection of literature, art and the meaning of life. Fun, though, and not too heavy. Full of fantastic language even though a translated work. In fact, I have ordered a print copy to review in addition to this pleasant listen.

Put me to sleep repeatedly as I started the book... only Moby Dick has worked better. I wondered how it had ever been published considering the initial lack of plot and endless mental tangents. The characters however, do grow on you and I stayed up late in order to finish the charming and unexpected 2nd part. Came away with some delightful insights. Those who might find even more joy in the book would be lovers of: Russian literature, still life paintings, Japanese cuisine, complex minds, tea and of course, all things French.

I'll admit at first I was frustrated by The Elegance of Hedgehogs. The plot took a long time developing and the two main characters spent a lot of time pontificating on heavy themes. I love philosophy as reflected by fiction, but I felt the author spent much too much time on heady intellectual theories and not nearly enough time in the forward action of the story. However this was all absolved as I learned to understand them. One is an older woman in her 50s, a concierge in a rich apartment building who has been stunted by class expectations of her childhood and tries to hide the fact that she is an intellectual so as not be seen as putting on "airs". The other is a 12 year old girl of parents who pretend to have socialist aspirations but are really bourgeois, aloof and unfeeling. The girl is of extraordinary intelligence and can see through the facades maintained by her parents, older sister and adult society at large. She is disenchanted with the idea of growing up and living a "fish bowl" existence. Thus she has resolved to kill herself on her 13th birthday. As the story progressed I realized that to truly understand these characters and the boxes they put themselves it was important for the reader to endure the various wonderings, profound thoughts and journal exaltations, otherwise the resolution when they discover that their fates are not predetermined would not have been nearly as satisfying. It is an all together "elegant" novel filled with minute perceptions and sensory satisfactions.

Although it took a bit of time, perhaps one hour of listening, to "get into" the personalities of the story, I found this to be a completely beautiful and thought-provoking novel. Barbara Rosenblat is a genius storyteller. She is funny, sublime, and absolutely perfect in her role. Honestly, this is one of the best books I have ever had the pleasure of reading (listening) and I highly recommend it. It is a literature that makes you think about it for days as well as cry when you think about the characters. If I could give this 6 stars, I would!!!

This book is not what you think...

I liked this book quite a bit. The book, the story, and the characters are all simple, yet satisfying. The writing and language are superior. The meaning was, in my opinion, the key and was not overt. This seems to lead to strong feelings, both positive and negative about this book. I thoroughly enjoyed the narration and the humor, but mostly I enjoyed the spirit.

Stuck In A Quandary

If you read the reviews here you will notice a strong divide between lovers and haters of this book. I find myself in the odd position of agreeing with both of these extreme ends of the review spectrum. On one hand I thought the first part of the book was lecturing and posing in tone and that the narrators mispronounced many words. Then as the book progressed the whole feeling changed and I found myself really liking the story and thinking the narrators were good.

I know this isn't much of a help if you are trying to decide on whether or not to try the book. I'm afraid that I am of two minds and will have to give it all three stars and stand right in the middle. Parts of the book and narration are excellent and deserve 5 stars and parts are just dreadful. I will say that in the end I was glad I gave it a try and stuck with it, but I'm also glad the book was on sale and that I didn't spend a credit.

I did not want to like this book, selected by book club. 15 minutes into it, I was hooked - it made me laugh and cry. I wanted to know these characters more and will listen to this audiobook again and again.

This story grew on me the more I listened. You have to some patience, however, since most for most of the story you are listening to the two main characters talking to themselves - thinking out loud. Both characters are amazingly smart and insightful - the young girl preternatually so. A touching but improbable ending is a bit of a disappointment. Fun if you enjoy learning more about class struggles in France.

A good novel out of almost nothing

Even though I did not like the characters of the story, I listened to it almost twice because of the way everything was portrayed. It was vivid and real. Sometimes, I felt like listening to my own thoughts. Especially with Paloma when she had these stupid profound thoughts which made me consider my own. What do you hope to get out of a book?