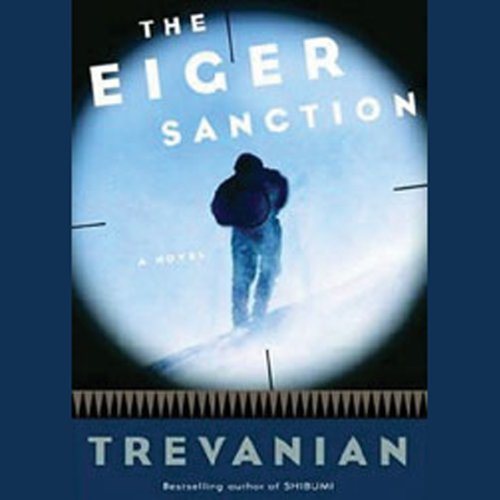 In a renovated Gothic church on Long Island lives Jonathan Hemlock, an art professor and a world-renowned mountain climber who finances his black-market art collection by working as a freelance assassin.

Now, Hemlock is being tricked into a hazardous assignment that involves an attempt to scale one of the most treacherous mountain peaks in the Swiss Alps: the Eiger. His target is one of his three fellow climbers. The problem is that the CII can't tell him which one.

This spine-tingling adventure, part thriller and part satire, introduces an intriguing cast of villains, traitors, and beautiful women into a highly charged atmosphere of danger and suspicion that builds to a death-defying climax.

"Superior suspense on almost every page...the hero is a masterpiece of conflicting qualities - something for everyone." ( New York Times)
"Trevanian can write hoops around Ian Fleming." ( Boston Globe)

No novel by Trevanian is a straightforward matter. Part thriller, part satire, EIGER SANCTION is an extremely well written treatise on mountain climbing, a dig at celebrity culture, an examination of the mind of a killer and in the final analysis; a great story. While a little slow to get going, the novel quietly builds up a head of steam, and while there is lots of diversion along the way,once the tension starts rising the pace never lets up.
The narrator is really good.

I just loved this book. The story is build up very well towards climbing the Eiger. The climbing itself is an awful good chapter with a surprising final. The narrator Joe Barret is really excellent. And folks; I am a girl and did not mind the fancy bits at all.

I was surprised, unpleasantly as it happens, that the Eastwood film was not responsible for the puerile social commentary of this story. The book is best when it deals with the climbing, as long as you can past the ludicrous reason for it being in the story in the first place. But when it tries to be blithely politically incorrect (a term I'm fairly sure wasn't in use at the time of the book or film) it is cringeworthy. I don't know that it's fair to call the book racist, misogynist and homophobic, but it certainly has a stunning lack of awareness beyond its straight white male myopia. I had heard that the author claimed it to be a "spoof" and ridiculed the film, but I don't believe it. The book and film are strikingly similar. I kept going in the hope that it would become clear that it was merely a literary conceit, presenting the ugly character of the protagonist as someone to be derided or pitied. But no such luck, as the 3rd person narrator also engages in the unseemliness. If the author meant it as a spoof, he failed miserably. If not, he just created a sophomoric attempt at social commentary.

And I Learned a Lot About Mountain Climbing, too.

At once deadly serious and slyly funny, Trevanian achieves the same level of visceral tension as Ian Fleming (and many, many more suggestively comic character names, too) while maintaining a John LeCarre-esque “curse-on-both-their-houses” attitude to the Cold War. James Bond has his doubts about what he does; Jonathan Hemlock has nothing but contempt for the job, only doing it to finance his lifestyle.

Even at 11-some hours—for me, a long-ish time to maintain the suspense of a thriller—his story doesn’t drag. With perfect pacing, characters develop naturally, and when we’re not encountering interesting people, we’re living through surprising plot turns. Of course, the brisk, witty, accurate writing helps, too. There’s always something here to keep you listening. And if you do, you’ll also learn a lot about the history, allure, challenges and techniques of mountain climbing.

Joe Barrett is just plain fun to listen to, always putting in a wry topspin or deadpan delivery precisely where it’s needed. This performance rivals his spectacular reading of Bonfire of the Vanities.

I'm a guy, so I didn't mind the sexism as much as much as a woman might. The protagonist is a cliche, but if you can accept him for the arrogant pig that he seems to be, then you might start to actually like him by the end of the story. Even the names of the characters are "tongue in cheek"- an indication that they represent stereotypes- but they are all interesting. I'm sure there is some "deeper meaning" in the story that could be explored by a college Literature class, but I'm not "that deep" and just enjoyed them all at face value.

It was narrated very well and the story kept my interest- it is an action/mystery more than a romance. This one might be enjoyed more by a "guy" than a woman... I don't think easily offended feminists will like the main character very much. There definately IS much commentary on society in general and, if you "get" the satire, it will make you smile.

The Eiger Stands the Test of Time

Great buy on the First in Series Sale. I love narrator Joe Barrett from Brian Haig, Sean Drummond series!! See the best, Private Sector to laugh your head off. I do use the 1.25x speed to match authors action. Joe does a fab job on this book, a fave film of mine.
If you saw Clint Eastwood in this title film, then this book is even better than the film. Narrator, Joe captures the essence of the authors wit, and the dialogue of the times. I can tell you, you are right there on the face of the Eiger!!
I can see why Clint wanted to do the film, and why George Kennedy stole the Ben, 6 pack beer scenes! Gads, as you listen to the book, you can just picture Jack Cassidy as Miles Mellow and visualize George as she runs Clint up steep hills. Not to be missed are the climbing scenes, they either make you want to take lessons or never go near a mountain again.
Book 2 in the wish list.
Were my comments of help?

I was hoping for suspence. No substance just hopping in the sack. After listening to about one fourth, I threw the discs in the garbage.

I'm a big fan of the movie, I've seen it many times over the years, but never read the book. although the adaptation for the movie was typical Hollywood, well I have to admit that this storyline did not disappoint. Mr Barratt did more and a fine job introducing characters in describing the highs and lows of the story. this is a book worth listening to.

Intelligent characters. Believable. Funny as humanely possible. What a good book this was. it was way better than the moviè.

I've seen the movie many times and loved it. The book is also great and just different enough to still be interesting.