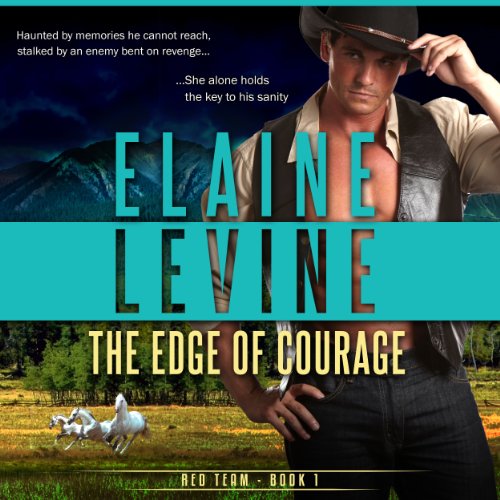 Haunted by memories he cannot reach, stalked by an enemy bent on revenge...

Rocco Silas has come home to Wyoming after long years as a Red Team operative in Afghanistan. It isn't easy returning to civilian life, especially burdened as he is with a staggering case of PTSD or hunted as he is by an enemy determined to seek an eye-for-eye - neither of which can he battle until he confronts the truth of what happened one fateful day in the high mountain ranges of the Hindu Kush.

She alone holds the key to his sanity.

Mandy Fielding's dream of opening a therapeutic riding center on her family's ranch is almost within her grasp - until she hires Rocco Silas, a dangerous ex-Spec Ops friend of her brother's. His haunted eyes and passionate touch promise a love she never dared believe possible. Can they confront the truth of his past and build a future together or will the enemy stalking him destroy them both?

Edge of Courage.........by Elaine Levine
This novel had an emotionally broken hero that tore at your heart. Rocco Silas is a former military Red Team operative, and lived deeply undercover in Afghanistan for several years.
He has seen the worst of humanity and carries the mental and physical scars with him no matter where he goes. After returning to the U.S. he is treated at Walter Reed for his PTSD. Drugs that left him numb, and unable to function were their answers for him. He pretended he was fine, secretively stopped taking the drugs, and hit the road. One of his teammates, Kit Bolanger, pleads with Rocco to help his half-sister Mandy Fielding. She is trying to get a therapeutic riding school off the ground and is running into some disturbing issues. Vandalism, theft and exiting employees are threatening her plans.
Mandy , our heroine, is a beautiful, strong and caring woman. She is a trained massage therapist, and has an amazing way of calming children, adults and animals. At their first meeting Mandy can see the pain and conflict in Rocco's life, and soon learns the gravity of his PTSD. He feels he is a broken man, not deserving of comfort or peace. Mandy feels very differently .
It was such a relief when Rocco finally realized how lucky he was to have Mandy in his life, and he vowed to protect her with his own. Very dangerous men from Rocco, Kits, and their other teammate Ty's past threaten their future, and Mandy's .
This novel was action-packed, and contained a beautiful love story. I very much enjoyed meeting the Red Team. I highly recommend this novel to listeners who enjoy military romances with a bit of cowboy.

Please Audible bring us the rest of the series

Eric G. Dove was outstanding with the delivery of the story

This book has It All !! Totally Fulfilling :)

The Edge of Courage is the story of Special Forces soldier Rocco Silas and his search for sanity, love and family. This book is also the first in her Red Team series and I can hardly wait for the next book... The Edge of Courage is defiantly Romantic Suspense - Hot as Hell and had me on the edge of my seat from the get go...

Rocco has given ten years of his life for the country he loves. Because of his gift for learning and mimicking languages he has spent the last eight years buried deep under cover in the wilds of Afghanistan. During this time he was gathering Intel and doing everything he could to get close to leaders of the Taliban. Rocco even married an Afghani girl and had a son, until one horrifying day when everything went wrong and life as he knew it ended.... After spending weeks at Walter Reed, Rocco is still seriously messed up in his head and runs home to Wyoming only to find that home isn't exactly home any more. Rocco tries to get his footing and ends up at his friend’s sister’s ranch. Mandy is nothing like he expected and everything that he needs and can’t have. However things are happening on Mandy’s ranch and Rocco won’t leave her until he solves the mystery. Little does he know that his nightmares have followed him and taken on a life of their own.


In this story we meet all kinds of people, eccentric small town residents, hot alpha military types, skin heads, druggies, terrorists, Hard muscled hot alpha men and cute kids. To me this book had it all and i will be continuing with this exciting series :)

UGH! This hero was annoying! I did not like this.

Wow, I had such a hard time getting through this story. It truly was a struggle to like this hero he was so messed up. Major PTSD, repetitive thoughts, and then lets throw some Survivors Guilt right on top! UGH!.......

This hero, Rocco is so messed up in the head from Afghanistan the only reason I believe the heroine, Mandy likes him is because he is hot, it sure is not because of his personality. The chemistry between these two is just not genuine at all. The character development was very poor as far as Maddy. And Rocco character was just not good. Bleh...

There are some hot and steamy sex scene. However the last one stands out as pretty ridiculous at about 92%.

Here is the scene. They are both in a car with the bad guy, the car is loaded with a bomb, Rocco gets Mandy to jump out and run before it explodes, she does. About 2 minutes later the SUV blows up, of course Mandy thinks he is still in the SUV (who wouldn't) but no a few minutes later Rocco comes walking out of the smoke all dirty and smutty from the smoke. Mandy runs into his arms and this is what he says "Mandy I need you now, I want to be in you". So he takes her to an empty SUV parked a little ways away from the explosion and they hop in and have descriptive sex. Meanwhile, this whole area is surrounded by cops, the bomb squad, his buddies and her brother and they go bang in an empty vehicle. ARE YOU KIDDING ME?!! REALLY?! That has to be one of stupidest scenes ever!

The story line and plot seemed to be all over the place, not cohesive at all. Needless to say I didn't care for this book very much. I liked it from 65%-79% That was the best part of the book. Yeah! A whole 14% over half way through.

As for the narration, that is the only reason I kept listening (and hoping the story would get better) I love Eric Dove, he is a fantastic narrator, he gives everyone a their own voice, the women sound like women and his reading voice is fantastic. He reads with emotion, yelling, coughing, whispering etc.. Just fantastic.

I cannot recommend this story but I do recommend the narrator!
So glad I got this book free on amazon and 1.99 for the audible whispersync. But I did lose 9 hours of my life. UGH...

This is touching story, about the horrors of war and adjusting to life back home, it was heart breaking in places and I was glad for a happy ending!

I would recommend this book to anyone who loves suspense and romance. Ms. Levine tells a story that keeps you riveted until the very end.

I loved the compassion of the leading lady. Her understanding of a damaged soul. The leading man while brave and strong learned to lean on his lady to help him through his PTSD episodes.

What does Eric G. Dove bring to the story that you wouldn’t experience if you just read the book?

I did not realize how much detail I missed when I read the book. I obtained a clearer understanding of the underlying plot to the story. He is a really good narrator

I gave 5 stars to Ms Levine when I read her books. I wish I could giver her 10 stars for the quality of her work. Eric Dove did a wonderful job in bringing her book to life. I look forward to enjoying the rest of this series on audio.

Red Team is romance and action and courage !!!!!!

Would you consider the audio edition of The Edge of Courage to be better than the print version?

When Mandy says if she has to fight the entire town for Rocco to be able to stand and watch the sun move across the sky.

Have you listened to any of Eric G. Dove’s other performances before? How does this one compare?

Yes, in the Scanguard series. He was very good in that series but I enjoyed him more in this. I'm not sure why. I loved Rocco when I first read the book, but now I can hear him too.
Eric did a wonderful job with Rocco, as he talks you can feel his emotions.

Yes I did cry, two or three times. It was worth it.

Loved this story, loved the reader

Would you consider the audio edition of The Edge of Courage to be better than the print version?

The audio edition added depth and dimension to the written book.

There are many moments when the reader REALLY infuses the edge and grit that are a part of Rocco's character. He also brings off the beauty and kindness in M's character as well.

All except Owen were done really well. I couldn't visualize Owen's character based on voice.

A new type of team novel

What made the experience of listening to The Edge of Courage the most enjoyable?

Definitely the description of Rocco and Mandy's tryst in the kitchen. My other favorite would be when Rocco reunites with Zavi

I would have to say Owen. Even though he e does not have a great big part, Eric manages to convey the attitude of command and responsibility, and wee bit ofsnarkiness that is Owen

Brave, broken men, and the women and circumstances that shaped them

This is really a great series. The characters are morphing with each book. I really lime the way the books "overlap" for want of a better term. As one book starts, the next one is picking up right where the last one left off

Elaine Levine is a new author for me. I wasn't sure what to expect, but she did a fabulous job of blending fascinating characters with romance, action, intrigue and a reality-based topic. I am looking forward to the next novel.

This was a really well narrated audiobook and the narrator drew out the characters very well. I highly recommended this audiobook!