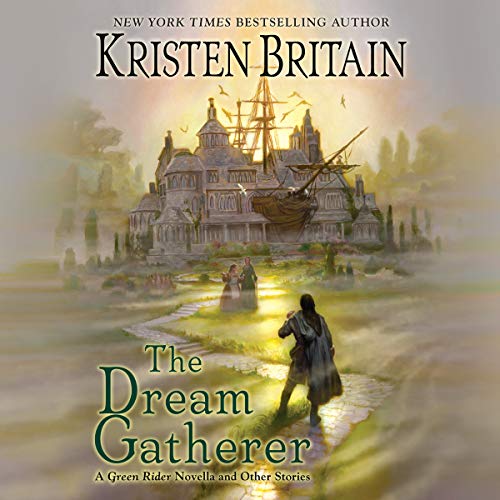 In The Dream Gatherer, Kristen Britain presents a novella and two short stories set in the universe of her best-selling Green Rider series in celebration of the 20th anniversary of the publication of her first novel, Green Rider.

Dreams can be dangerous. A visit with the eccentric Berry sisters turns dangerous when an arcane device is discovered in their house that can summon dreamers through their dreams, and one of them is a nightmare.

Finding peace during the Long War. Raised in an orphan camp, Green Rider Danalong has known only war and strife, until a shipwreck leaves him stranded on a mysterious island.

Linked, on the Lake of Souls

A story of friendship within a story of friendship. In the sixth volume of the Green Rider series, Firebrand, a wounded Karigan G'ladheon asks her friend Estral to tell her a story to take her mind off her pain. This is that story.

The audiobook includes backstory on the creation of Green Rider by the author and a special introduction by award-winning science-fiction and fantasy author Julie E. Czerneda.

"Kristen Britain is one of the most astonishing fantasy writers working today. She has created a richly imagined world where magic is as real as courage, and where a young woman's heroism can change the course of history." (Tess Gerritsen, author of The Apprentice)

"Britain keeps the excitement high from beginning to end, balancing epic magical battles with the humor and camaraderie of Karigan and her fellow riders." (Publishers Weekly)

“The intermittent sense of foreboding is offset by a healthy dose of old-fashioned adventure - kidnappings, a noble thief, near drowning, divine visitations, ghosts, a visit to an upscale brothel, and some very bad knife throwing - that provides a satisfying temporary conclusion despite this being very much a middle novel with serious nastiness still looming.” (Locus)

Sort of my own fault for not reading carefully, I saw a new Green Rider book and immediately ordered it only to discover I paid a full credit for a 4 hour book that spends at leas an hour talking about the author and friend. Big disappointment. There are two short stories and one novella included. Most authors would offer these kind of short stories as a free item on the web site. Definitely not worth a whole credit when the other books are at least 16 hours or much more. I have enjoyed all the green rider books, but felt taken by this offering.

Totally dissapointed! I was expecting to hear more of Karigan's story, but this is like another story altogether.

The stories are great. I love getting to know the Berry sisters and Estoril as the new Golden Guardian (sp?) better. I just want more time and stories in this world

I absolutely loved it!

The world and the people that this edition celebrates is my all time favorite! This newest novella did not disappoint!! Not to give much away.. is that I felt closure and healing for more than one character and wonderful delight at returning to Seven Chimneys once again! An excellent read for those who are, and who are NOT familiar with the Epic series this is based around!!! I believe it does stand on its own. So many years I have spent reading and re-reading the Green Rider series, first in hard copy, then ebook and now on Audible. I have more than one physical copy of all in the series but I'm still looking for that elusive hardback first edition Green Rider! My absolute favorite author and world!!! ❤❤❤

This little story collection is a great addition to the Green Rider world. Read post-Firebrand.

As excellently narrated as the Green Rider series, these short stories and snippets from the author are a wonderful treat. Offering insights into Kristin’s life and inspirations of her written works, this novella provides delightful asides to tide you over until the next book’s release. I’m so glad I chose to purchase and listen to The Dream Gatherer; fellow fans will not be disappointed!