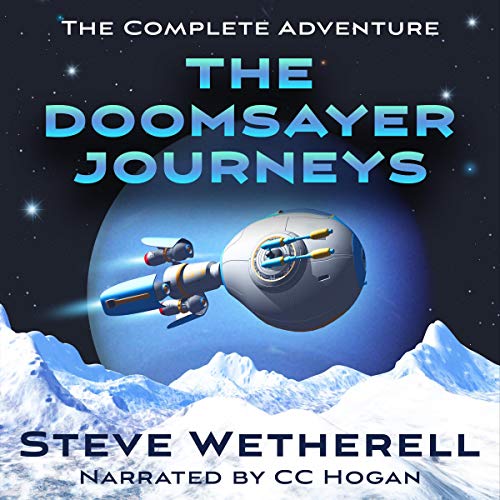 Fans of Douglas Adams' Hitchhiker's Guide to the Galaxy and Good Omens - your wait is over! The next ridiculous sci-fi fantasy series from a snarky British guy is here!

And now you can experience the complete Doomsayer Journeys Trilogy in one volume!

The fate of the world lies with one man: Bip Plunkerton.

Talentless psyentist and frequent drinker at The Empty Goat, young Bip Plunkerton will follow in his father’s footsteps as a Volunteer…footsteps that have yet to return from the wilds of the wide world outside.

Traverse the harsh weather of the formidable Ice Plains, navigate the Boiling Sea, and suffer the ravaging heat of the Bone Desert. Bip’s impossible task, continually thwarted by the semi-corporeal Mr. Random, is to warn the rest of the world of the coming doom of the Massive Ball of Death hurtling through space.

Will the last volunteer be any more successful than the first?

Will Bip save planet Bersch from a fate set into motion millennia before?

After announcing to the public that the Massive Ball of Death is coming to destroy everything, Bip finds himself locked away with the other criminally insane. Aided by his psyentific talent for exploding things and creating the random igloo, Bip manages to escape and team up with the immortal Handen Strike, the first Volunteer who ventured out to spread the Clarion’s message of total world devastation.

Traveling across the face of Bersch, these four adventurers, albeit somewhat reluctant, must brave raging giants, the fountain of death, and savage birdmen to ensure their message reaches the ears of the very emperor who has been trying to imprison them.

With these three gems saving the world, what’s the worst that could happen?

When we last left our adventurers, the Massive Ball of Death was massively falling toward the certain death of all Bersch’s inhabitants.

The secret to stopping the destruction and saving the world - if it should, indeed, be saved - is hidden away deep in the desert sands.

But, back to the tale! Bip and his crew must race against the clock to unearth the secret weapon before the mad emperor can use it for total galactic annihilation. Will our brave adventurers beat the clock?

Find out if the Doomsayers were right, or if they're just another bunch of idiots looking to get on television by saying stupid crap.

If you think stupid is funny you might like this. The story never begins. I listened to the first hour then gave up.

This world, or maybe I should say universe because the perspective does zoom in and out frequently enough, has an interesting blend of science fiction, fantasy and comedy.

If you like the idea of “magic is just science that we don’t understand,” characters that meander from one adventure to the next while trying to save the world, and quite a lot whimsical odd-ball humor than give this book a try.

That being said there were times that I felt the books were dragging on and it was difficult for me to keep listening. I just didn’t really connect to the characters. It was the plot and the humor that kept me going in the end though and I’m glad I did because I really enjoyed the troupe that came into play at the end of the novel.

Not funny. Hard to get Into. Not as entertaining as Hitchhikers Guide To The Galaxy.

Not funny, poor performance, gave up

I searched for funny sci-fi. This is not. Really did not like the performance, monotone vokce. Hard to understan names and words. Story created no mental images for me.

Definitely worth the listen. The message doesn't water down the entertainment aspect of the story. You can choose to simply take it as a fun adventure or look for the deeper philosophy woven through it. I won't be forgetting these characters.

Nice listen with some predictability, but overall a great representation of the genre. Good characters and interesting ideas

The editor review is spot on. If you like Hitchhiker's Guide and Good Omens, you will surely like this collection from Steve Wetherell. Very funny, very engaging, great story and characters.

This is a steal for one credit!

By all that's entertaining, that was a good listen!!
The descriptions of the world reminded me of Final Fantasy which made the world so real for me.

if you like the hitchhikers guide. this is for you

This sci fi adventure tale is an amazing read, especially if you are a fan of Douglas Adams. Wetherell pulls you in to a fantastic tale. In Adamsesque fashion this series makes you think and has you looking around corners only to see... more corners. The humor is decidedly British so know that going in but definitely and entertaining romp through a fictional history of a planet doomed to destruction... or is it? Only the Gardener Knows.

take a while to get started...like the first half of the first book. but it get Much much better after that.