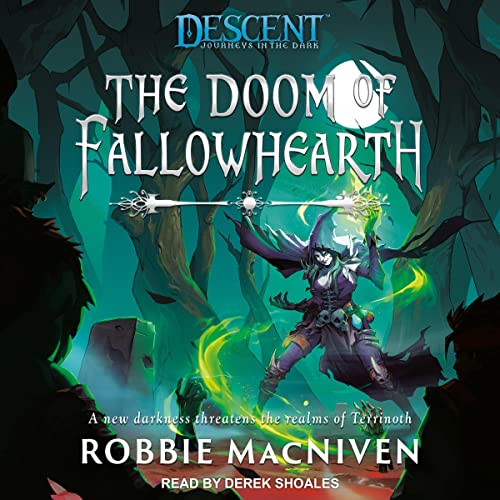 Legendary heroes battle the undead and dark sorcery, in the first of a rip-roaring new series for the fan-favorite epic-fantasy game Descent.

When the baroness of Forthyn's daughter disappears, she calls on the legendary orc hero Durik to find her. Durik enlists his old questing partners - the dwarf alchemist Ulma Grimstone and roguish Logan Lashley - in the hopes of reliving their glory days. Together they journey to fear-struck Fallowhearth. There, instead of clues, they uncover necromancy: graveyards emptied of corpses, with trails of footprints leading into sinister Blind Muir Forest.... But the forest holds more than just the walking dead: Between its boughs lurk treachery, a sorcerous ally turned to darkness, and a shocking infestation of giant, murderous monsters.

Another fat W for Terrinoth novels

This book is perfect for new and old fans of this series alike, Terrinoth has always had a rich wellspring of Lore that's deep but not overwhelming, and this book exemplifies that. The characters and their storied pasts might be familiar to Descent players, but the direction this story takes it is simply excellent. I got a gut punch to the feels a few times, and the narrator does a superb job of making each character feel unique and human.