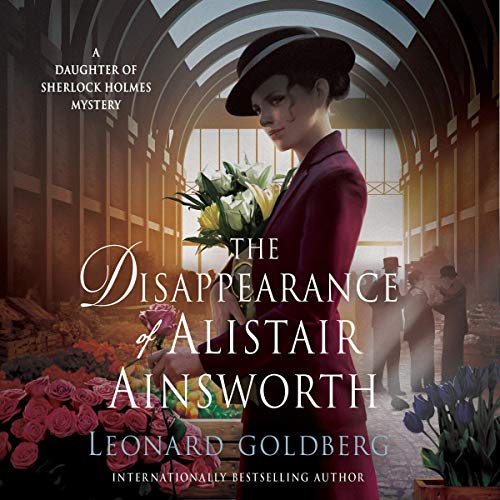 The Disappearance of Alistair Ainsworth

In the third audiobook of this critically acclaimed series, Sherlock Holmes' daughter faces a new unsolvable mystery with spies and a threat to the crown.

Joanna and the Watsons receive an unexpected visitor to 221B Baker Street during a nocturnal storm. A rain-drenched Dr. Alexander Verner arrives with a most harrowing tale.

Verner has just returned from an unsettling trip to see a patient who he believes is being held against his will. Joanna quickly realizes Verner's patient is a high-ranking Englishman who the Germans have taken captive to pry vital information about England’s military strategies for the Great War. The man is revealed to be Alistair Ainsworth, a cryptographer involved in the highest level of national security.

The police are frantic to find Ainsworth before the Germans can use him to decode all of England’s undeciphered messages. Ainsworth must be found at all costs, and Joanna and the Watsons might be the only ones who can connect the clues to find him.

Entertaining if not surprising

The story line is a fun mixture of different Sherlockian tropes and machinations.
The author wants so much to convince us that Johanna is Holmes's daughter and thus,
inherited his abilities that she can be a bit heavy-handed in the description and the dialogue.
For those reviewers who call out the killer in their review...you really lack courtesy for others. Shame on you!

I generally have been enjoying this series. I’ve listened to the complete works of Arthur Conan Doyle so was really excited about this series. It’s good but I don’t love how condescending Johanna comes off. She’s always patting the Watsons on the head and effectively saying “good boy! when they make a good observation. Also, there have been a number of incorrect details, which I find interesting for a series that relies on details. For example, Exodus is not the first book of the Bible. Genesis is. And Christians accept the Jewish Bible - they just accept the New Testament as well. That may seem a minor point but it was presented as a key clue in this book and it was all wrong. It’s a fun series. I really have enjoyed it. But don’t expect Arthur Conan Doyle and don’t expect accurate details.

Best "Daughter" of SH tale yet.

This story did not rely quite so heavily on similar Doyle stories as the last two. Though there were still many parallels, there were enough original ideas in this very complex novel to make it interesting and consuming. Though sometimes hard to follow, I was pleased to have identified (for three first tune! ) the villian from the moment of that person's introduction into this new narrative. If you listen with discernment you may, too!

A Pleasure to Read

Well written. Good attention to detail. The same can be said for books 1 and 2.

Characters consistent and enjoyable. Strong sequel in series but could be read on its own. Well developed plot and satisfactory conclusion. Wish there were more.

I am awaiting #4 with this narrator. I am wondering if the name choice of Joanna will be explained.

The best the series has to offer to date. I did guess the traitor twist. But the drama of the book and the interesting twist that the person who has disappeared is a genius leaving clues for our genius detective to solve to help find him was really interesting.

I enjoyed the first in the series, although not great, but entertaining. This sequel is sooo like the first that I had to check to make sure I wasn’t repeating the first by mistake. The same exact phrases were used time and again, and much the same scenario. I could not finish it. Im glad I didn’t use a credit to get it but paid a reduced price.

Idk if anyone else noticed that in chapter 17 the mother mentions to her son the man falling off of the building and a gardener witnessing it…. It was the son who had witnessed and given his detailed account of the event but in this book apparently that never happened and she talks to him as if he wasn’t there and hadn’t seen it himself. Johnny was the one who witnessed it in detail noticing that the man’s arms were not flailing. Am I wrong? This genuinely bothered me. If you’re going to mention a past event from a previous book in the series it makes sense to keep a sense of continuity.

This series is well written and narrated. The characters carry the story with very little author scene setting. The author dives in directly and the mystery immediately becomes the focus of the book. Following the logic is part of the charm. A good listen.