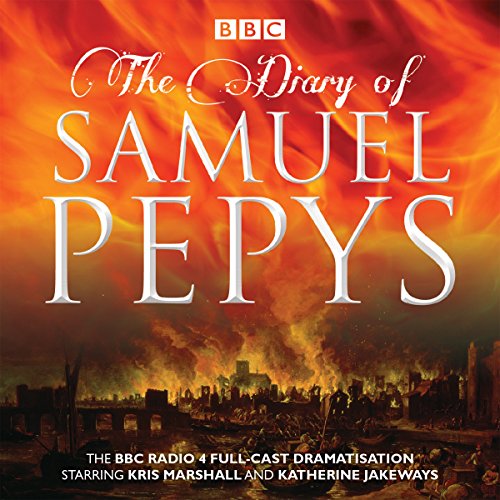 The Diary of Samuel Pepys

Kris Marshall and Katherine Jakeways star as Mr & Mrs Pepys in this BBC Radio 4 dramatisation of the world famous diaries.

Samuel Pepys was 26 when he decided to start keeping a diary, in January 1660. For the next 10 years he faithfully recorded the day's events and confessed his innermost thoughts. That diary has since become one of our most important, and fascinating, historical documents. Pepys gave us eyewitness accounts of some of the great events of the 17th century, including the Great Fire of London and the Second Dutch War. He also told us what people ate and wore, what they did for fun, the tricks they played on each other, what they expected of marriage, and even how they conducted love affairs. He described London - the frozen river Thames, the rising crime rate and the poverty - and recorded the details of his own life: his wife, rivals, lovers and friends, his work for the Navy, his drinking and social life.

Over 350 years may have passed since Pepys first put pen to paper, but the man and his preoccupations feel surprisingly familiar. In this major BBC Radio dramatisation of the journals, the sights and sounds of his world are vividly conjured. This collection comprises all 10 radio series plus a special Saturday Drama centring on the Great Fire of London.

Get Lost in Another Time

What did you love best about The Diary of Samuel Pepys?

I loved the acting. These are, by far, the best actors I've ever heard in a full cast performance. I also love the adaptation. The actual diary consists of 1st person journal entries. The mix of the narration of these entries and the full scenes is excellent.

There are so many things I liked about the story. I'd have to say, I was most moved by the personal relationships. Some of the characters were quite endearing. Humor was a huge part of the play. I found myself laughing out loud several times. I also loved the history that was so much of this story. I was transported to a long ago time and place.

It's impossible for me to pick out a single scene as my favorite. There were so many wonderful moments. I particularly enjoyed any scene with Samuel and his house boy/servant, Will. I'd have to say, these were probably the funniest exchanges.

As I said, there were many scenes that made me laugh, and a moment that nearly brought me to tears. The acting was so good, on par with the best British films and television, I found myself caring deeply for these people.

For anyone who particularly enjoys full cast audio performances, The Diary of Samuel Pepys is in my top five. In fact, it might even be my all-time favorite. It's hard to find fault with this production, but there is one glaring problem which caused me to deduct one overall rating star. Each of the 51 chapters is about 13 minutes long, and each one begins with a lone female voice singing a short, 20 second song. I wouldn't have minded if each time it had been a different song, but every 13 minutes I had to hear the same exact song. If that wasn't bad enough, any time there was singing by any of the characters, they too sang the same song. It's a shame the producers didn't take the time to edit out these 51 tedious chapter intros for the Audible and CD releases of this otherwise perfect audio play.

Would you listen to The Diary of Samuel Pepys again? Why?

I've listened to this over and over and there is always something new to discover in the diary of this horrible crazy wonderful man.

What other book might you compare The Diary of Samuel Pepys to and why?

It's impossible to compare this to anything else because it is someones real life dramatized and made so real that you just have to hear what happens on the next day.

The actors are magic and the end made me weep. I really felt like I had entered a world of a bygone age and I really got involved with the actors in that world.

Samuel Pepys reaction to the executions of those who fomented the Civil war is particularly moving even though it fills me with disgust at the same time it is interesting to see the reaction he has to it and how violence begets violence.

A wonderful dramatic realization of the famous diaries. Pepys was a remarkable witness to key events in English history. He writes with enduring humor. His openness reveals a man very much of his time, flaws and all.

Get inside the head of Samuel Pepys!

What made the experience of listening to The Diary of Samuel Pepys the most enjoyable?

The combination of dramatization and reading directly from the diary.

Sam's boy servant Will is hilarious, he plays the fool, but is smarter than he lets on. He tells chilling ghost stories and has opinions on current affairs such as war and politics that he makes known. He is part of the family and loves the Pepys, at one point he uses all the money he has to buy a diamond necklace for Mrs. Pepys. It must have taken him years to save for.

It has to be Sam as you feel like you are in his head listening to his consciousness talk directly to you as he experiences life.

"Love in the time of the Black Death"

The book vividly brings upper middle class London to life in the 1660’s. The events that took place during that time shaped British history forever are told with intimate eye witness accounts, the restoration of the Monarchy, the exhumation of Oliver Cromwell and his “execution”, the great plague of 1665, the fire of London in 1666 amongst others. Samuel’s relationship with King Charles II and James Duke of York is a fascinating side story, both knew him personally and respected his work with the Navy. He describes his formal and informal meetings with them. During the great fire both the King and Duke are on the streets with Sam trying to figure out the best way to tackle and stop the spread of the fire. They are all concerned with the welfare of the people of London and willing to do physical work themselves to stop it. You learn about the character of all of them.

Sam’s diary was meant to be for his eyes only and he holds none of his feelings back, he does write some of his adulterous liaisons in French, but they are easy to interpret. He was a hardworking and intelligent man dedicated to his job, he loved drinking in the taverns and going to the theater, he also had compulsions to cheat on his wife that he acted on and yet still loved her dearly. One of my favorite sections towards the end in October 1668 is when Sam is finally caught cheating on his wife, it’s compelling domestic drama and it’s real, it really happen, you can picture yourself in the room “and after supper, to have my head combed by my wench Deb, which occasioned the greatest sorrow I knew in this world, for my wife, coming in the chamber suddenly; did find me embracing the girl with my hand under her petticoats; and indeed, I was with my hand in her cunny. I was at a wonderful loss upon it, and the girle also."

I've read Pepys' entries now an again over the years. This dramatization with music, ambient noises, and other players interspersed with his quotes is wonderful. So lively and a delight to listen to.

One of the best audiobooks I have ever listened to, and I have listened to hundreds.

This is perhaps one of the best radio dramas I have listened to on Audible. Don't even hesitate. Get it, and enjoy.

I hesitate to write a review of his life. I think it best for those listening to come to their own conclusions. The material is so rich, and there is so much to process emotionally that it has been many days now and I am still thinking about Pepys.

The only question I have about the production is that it seems the character of Will may have been a combination of two people, his boy, Will, and another man named Will who was his boy early on and later became an accountant in his own right. If anyone can verify this, it would be helpful. Been looking around online and can't seem to find clarity on this point.

Incredibly entertaining. I was sad it ended.

This was the most entertaining and informative book I've read in a long time. I listened to it while on my daily 3 mile walks and couldn't WAIT to get outside to walk so I could hear more about the insatiable Samuel and his wife. Each character was distinct and memorable. A fascinating journey into the 1660's!

not really about the plague

okay audiobook, oddly interesting, some performances too much, pretty compelling listen can't imagine would be a good read.