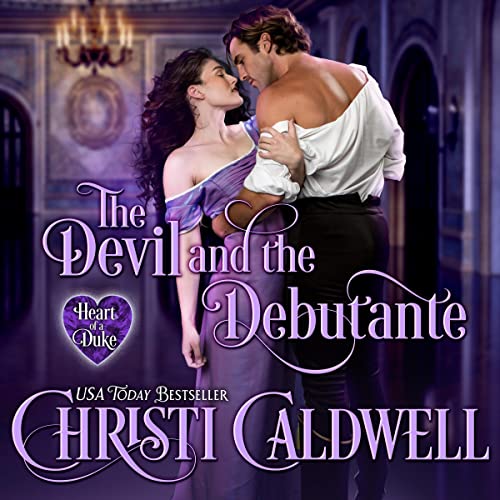 The Devil and the Debutante

Rex DuMond, the Marquess of Rutherford, rules over London’s most wicked gaming hell Forbidden Pleasures. His black-hearted peers might spend their evenings in polite society, but they spend their nights gambling their wealth, land, and secrets away at his tables. No man can turn him from his chosen life of decadence and debauchery, not even his domineering and disapproving father.

Lady Faith Brookfield hasn’t forgotten the night she entered Forbidden Pleasures and crossed paths with the dark, seductive gaming hell owner. That night, however, she discovered more than a dangerous attraction, she also uncovered dangerous secrets--ones that can avenge past wrongs against her aunt and save other young women from suffering a similar fate.

In order to save his gaming empire, Rex has no choice but to pursue the innocent debutante for the secrets she holds. Can true love ever be born in treachery and deceit? Accustomed to a world where the house always wins, Rex must wager all he owns on the greatest gamble of all…love.

Heart of a Duke Books

For Love of the Duke

More Than a Duke

The Love of a Rogue

Loved by a Duke

To Love a Lord

The Heart of a Scoundrel

To Wed His Christmas Lady

To Trust a Rogue

The Lure of a Rake

To Woo a Widow

To Redeem a Rake

One Winter With a Baron

To Enchant a Wicked Duke

Beguiled by a Baron

To Tempt a Scoundrel

To Hold a Lady's Secret

To Catch a Viscount

To Marry Her Marquess

The Devil and the Debutante

Ten Things I Love About the Duke

One of her best

Love the storyline and characters. The sex is raw but works. Loved this book. Tim Campbell makes it all come alive.

This book totally lives up to the quality and swoon worthy stories in this series. I believe Faith and Rex are now on my lost of favorite couples. A must read!