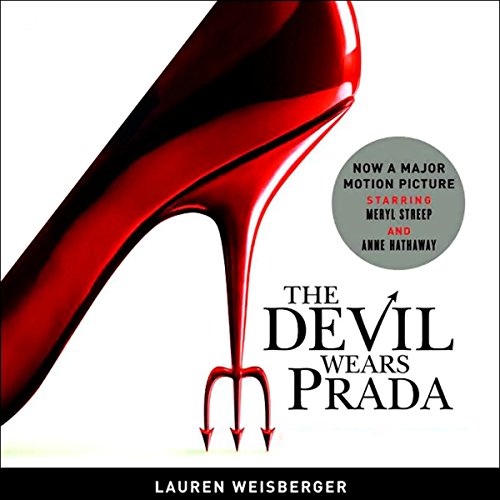 Andrea Sachs, a small-town girl fresh out of college, lands the job "a million girls would die for." Hired as the assistant to Miranda Priestly, the high-profile, fabulously successful editor of Runway magazine, Andrea finds herself in an office that shouts Prada! Armani! Versace! at every turn, a world populated by stylish women and beautiful men. With breathtaking ease, Miranda can turn each and every one of these hip sophisticates into a scared, whimpering child.

The Devil Wears Prada gives a rich and hilarious new meaning to "the boss from Hell." Narrated in Andrea's smart, refreshingly disarming voice, it traces a deep, dark, devilish view of life at the top only hinted at in gossip columns. From sending the latest, not-yet-in-stores Harry Potter to Miranda's children in Paris by private jet, to serving lattes to Miranda at precisely the piping hot temperature she prefers, Andrea is sorely tested each and every day - and often late into the night. She puts up with it all by keeping her eyes on the prize: a recommendation from Miranda that will get Andrea a top job at any magazine of her choosing. As things escalate from the merely unacceptable to the downright outrageous, however, Andrea begins to realize that the job a million girls would die for may just kill her. And even if she survives, she has to decide whether the job is worth the price of her soul.

"Miranda's behavior is so insanely over-the-top that it's a gas to see what she'll do next, and to try to guess which incidents were culled from real life." (Amazon.com)
"Weisberger has penned a comic novel that manages to rise to the upper echelons of the chick-lit genre." (Publishers Weekly)

A light read but entertaining

This book is pure junk food: No substance for a literary mind but a great read for giving your brain a rest. The length is good and the story keeps moving in this abridged addition. There were no preachy or long, whiny diatribes of the injustices Andrea suffered at the hands of her boss, (which I absolutely hated in the Nanny Diaries.) However, it annoyed me that the author weakly tried to tackle a moral/social issue (which is more important, job or friends). I think it detracted from the strengths of the book, which were its gossipy look into fashion publishing and those wonderful interactions with the devil herself, Miranda Priestly.

Could not listen to reader's delivery

The story is similar in theme to "The Nanny Diaries" (young woman works for affluent female "Boss from Hell". I tried to enjoy the story, but the reader's delivery was absolutely unbearable to listen to. The delivery was flat, drippy, emotionless. I think I'll go to the library and borrow the printed book to read.

A tale of a 23 year-old in her first out of university job. The story is very light and is supposed to be funny. But rather than finding the main character's "boss from hell" situation sympathetic and amusing, I found it pathetic and annoying. Her reason for staying in her job is a little thin and therefore it's hard to feel she's a victim. I did break a smile a few times but never really laughed.

Ok so this isnt exactly the greatest book in the world, but it is amusing and entertaining especially if you've ever had to deal with cranky bosses and co-workers. The plot and the main characters are weak, but if you are looking for a little humor and nothing to substanial then this is for you!

What kind of intellegent young woman would put up with this treatment for this long? Shades of The Nannie Diaries. Very whiney, very shallow. Very boring.

Such amazing material, such one dimensional writing. What a shame that Ms.Weisberger couldn't have added a little humour to the mix, Andy comes off as a whiny idiot. To cap it all, Ms. Leigh Cook's reading skills are marginal to say the last: she mumbles, and her attempts at accents are pathetic, Uri the Russian limo driver is indistinguishable from the concierge at the Ritz in Paris!

The book was ok. I had a really hard time getting past the narrator. So monotone and boring. No emotion in her reading at all.

This was my first time listening to the book, and it is very cleverly descriptive. It’s very well done!

I really enjoyed the movie so I picked this one out. I gotta say, it was a struggle to listen to this book after the first 15 minutes due to the narration. To me, the narrator sounded like a 5th grader reading her homework assignment.

Better than the Movie

I found this story to be so much better than the movie. I don't want to take anything away from the actors but this book had such a strong personalities.