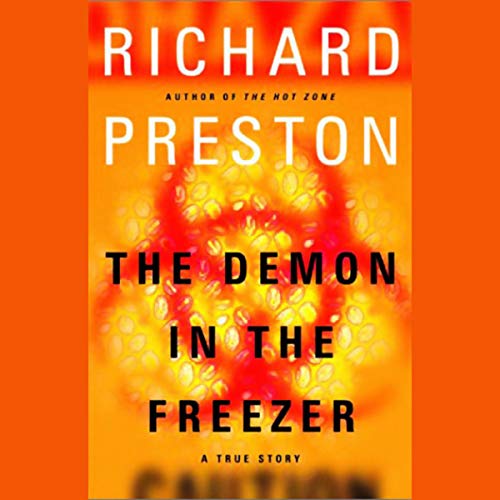 The Demon in the Freezer

“The bard of biological weapons captures the drama of the front lines.” (Richard Danzig, former secretary of the navy)

The first major bioterror event in the United States - the anthrax attacks in October 2001 - was a clarion call for scientists who work with “hot” agents to find ways of protecting civilian populations against biological weapons. In The Demon in the Freezer, his first nonfiction book since The Hot Zone, a number-one New York Times best seller, Richard Preston takes us into the heart of USAMRIID, the United States Army Medical Research Institute of Infectious Diseases at Fort Detrick, Maryland, once the headquarters of the US biological weapons program and now the epicenter of national biodefense.

Peter Jahrling, the top scientist at USAMRIID, a wry virologist who cut his teeth on Ebola, one of the world’s most lethal emerging viruses, has ORCON security clearance that gives him access to top secret information on bioweapons. His most urgent priority is to develop a drug that will take on smallpox-and win. Eradicated from the planet in 1979 in one of the great triumphs of modern science, the smallpox virus now resides, officially, in only two high-security freezers - at the Centers for Disease Control in Atlanta and in Siberia, at a Russian virology institute called Vector. But the demon in the freezer has been set loose. It is almost certain that illegal stocks are in the possession of hostile states, including Iraq and North Korea. Jahrling is haunted by the thought that biologists in secret labs are using genetic engineering to create a new superpox virus, a smallpox resistant to all vaccines.

USAMRIID went into a state of Delta Alert on September 11 and activated its emergency response teams when the first anthrax letters were opened in New York and Washington, DC. Preston reports, in unprecedented detail, on the government’ s response to the attacks and takes us into the ongoing FBI investigation. His story is based on interviews with top-level FBI agents and with Dr. Steven Hatfill. Jahrling is leading a team of scientists doing controversial experiments with live smallpox virus at CDC. Preston takes us into the lab where Jahrling is reawakening smallpox and explains, with cool and devastating precision, what may be at stake if his last bold experiment fails.

“Richard Preston has brought us another book that reads like a top-notch thriller. Would that it were fiction. As the movie unfolds in your mind, remember this: It can happen here.” (Laurie Garrett, author of The Coming Plague)

“The Demon in the Freezer is fascinating, frightening, and important. It reads like a thriller, but the demons are real. Richard Preston has a ‘black patent’ on this kind of reporting and storytelling. He is the only writer on the scene who can make the inside story of biological weapons so darkly entertaining. Read this book and pray that its heroes can lock the demon back in the freezer.” (Jonathan Weiner, author of The Beak of the Finch)

Preston does it again (also wrote the Hot Zone about Ebola virus) with an outstanding depiction of the current smallpox crisis. If this doesn't send chills up your spine, nothing will. Excellent descriptions of the effects smallpox has on the body and how easily it can spread. He takes you behind the scenes with the real life people working on this problem today. Narration quality - very good. Very highly recommended.

Anybody who has ever thought of Smallpox as "not that big a deal" or referred to it as "a bad case of Chicken Pox, right?" has GOT to hear this book. Extremely detailed without being gratuitous, the author really drives home the reality of deadly substances like Smallpox virus and Anthrax, and their consequences to our everyday lives. I literally could not pull myself away from my iPod!

This book makes you aware of how easy it really is for terrorists to use tools against us that could literally destroy us in a matter of weeks. It should change the mind of any skeptic who thinks terrorists can be dealt with peacably and explains very simply the problems with the United Nations and even Americans who live in a state of denial and prefer to keep their rose-colored glasses on. This book is based on very rational facts and takes fear and places it exactly where it should be. There are no scare tactics here, simply facts and logic and anyone interested in an honest portrayal of the war in Iraq and the goings on in countries such as Russia and Iran needs to listen to this book.

"The Demon in the Freezer" reads like a good novel, yet is all too real. Richard Preston does a great job of detailing the history of small pox, its impact on society, and the potential for its use as a weapon.

Never read a book by Preston if you wish to sleep soundly. As usual, this very gifted science writer has delivered a chillingly accurate study of a biological menace albeit human controlled, this time. A superb read and a "must read" considering the present world situation.

Awesome stories that should have been separate

Loved it because of how terrifying it was to read. Anthrax story should have been it's own book. The attempts at weaving it into the small pox plot did not work very well.

What disappointed you about The Demon in the Freezer?

Informatinve and a bit scary.

The book is very informative on all types of disease and bio war fare. How it can spread from person to person. The only reason I did not give a book a 5 star rating. It was a bit drawn out. But if you like medical thrillers it's not bad.

Will make you wash your hands a lot more often

Excellent book, even if a bit dated in parts (Iraq was still being run by Sadam at the time of publishing). Still, a very good synopsis of the science behind microscopic weapons of terror, complete with graphic descriptions of the deadly effects (that you know you want to hear).

The topic of disease and biological warfare is dark subject indeed, but this book handled it well. Although it was chilling to read the vivid descriptions of the effects of smallpox and other virulent pathogens on the body, the subject was handled well. It was accurate without being melodramatic. For such an unappetizing subject matter, the book was surprisingly enjoyable and I would recommend it to others.