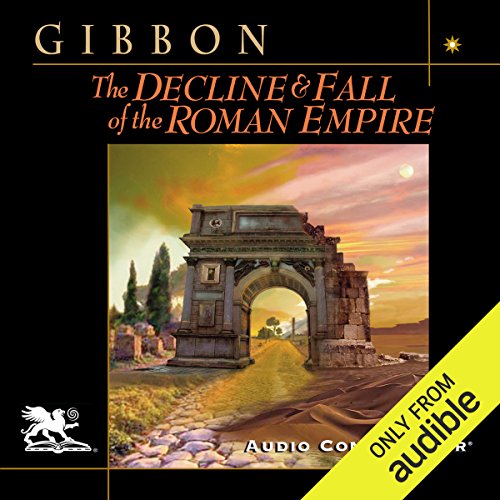 The Decline and Fall of the Roman Empire

Here in a single volume is the entire, unabridged recording of Gibbon's masterpiece. Beginning in the second century at the apex of the Pax Romana, Gibbon traces the arc of decline and complete destruction through the centuries across Europe and the Mediterranean. It is a thrilling and cautionary tale of splendor and ruin, of faith and hubris, and of civilization and barbarism. Follow along as Christianity overcomes paganism... before itself coming under intense pressure from Islam. It is a story that begins in Rome and ends in the capture of Constantinople by the Turks almost 1,500 years later. To aid in navigating this massive work, please refer to the accompanying PDF, which contains a table of contents and starting times for each chapter.

A nice book, very instructive, good reading. But a little longer than I wish...

This audiobook is absolutely phenomenal--and I have much to say about that--but let me first be clear about what this book is and what it is not.

The "Decline and Fall" can be best described as a brilliantly written exposition of Gibbon's views on events after the death of Marcus Aurelius and how these contributed to the downfall of the Roman empire, interwoven within a chronological narrative alongside colorful anecdotes and digressions. The main strengths of the work are Gibbon's clever and (dare I say) sublime command of the English language, his impressive wit, his astute observations and analysis of the political significance of major events, his keen perception of the levers of power in Roman society, his awareness of the human condition during what he describes rather bluntly as one of the most awful eras in history, and his genuine appreciation for the consternation of a people subject to the whims and caprice of all-powerful monarchs. Gibbon does not hesitate to editorialize throughout the narrative, offering readers strong and candid impressions through his cynical tone, his acerbic wit, and his biting criticism of contemptible characters. (Some examples below).

The book is not, however, a good introduction to Roman History, or even to the history of the late Empire for that matter. I wouldn't recommend it if your goal is simply to become more knowledgeable about a period. Despite Gibbon's unmatched thoroughness, the work is over 200 years old, and as such there are inevitably some inaccuracies due to the limitations of the sources at the time. So if knowledge is your goal, I'd recommend grabbing a modern book or reading wikipedia (seriously).

Instead, I'd recommend Gibbon if you'd like to enjoy a literary masterpiece with observant and well-thought out political opinions about the decline of Rome, encapsulated in a work that flows mellifluously with expertly crafted language, and that constitutes one of the most magnificent literary achievements of all time. A good analogy would be going to the Sistine Chapel -- you don't go to learn about Michelangelo or the events depicted therein, you go to be inspired by the masterpiece before you.

As you can tell, I thought very highly of the book, and with due cause. After all, there's a reason that a 200 year old book over 4,000 pages in length is still read today--a pretty powerful testament to its quality. (For context, I downloaded the book without any prior awareness of this quality, so I had no opinion at the outset. In fact, I was afraid the language would be turgid and abstruse on account of its age--I'm happy to say that I was blown away by the inaccuracy of my naive preconceptions, as I can relate without hesitation that Gibbon is the best writer I've personally encountered).

A good deal of credit is also due for Charlton Griffin’s masterful performance. His phrasing, inflection, and tone perfectly reflects the mood of Gibbon’s writing. That, and I wish my voice sounded even half as good as Charlton’s...

To conclude, here's a brief example of Gibbon's writing and astute commentary on politics, in discussing the power of the Praetorians, which I think is pretty representative of his approach throughout the work:

"Such formidable servants are always necessary, but often fatal to the throne of despotism. By thus introducing the Praetorian guards as it were into the palace and the senate, the emperors taught them to perceive their own strength, and the weakness of the civil government; to view the vices of their masters with familiar contempt, and to lay aside that reverential awe, which distance only, and mystery, can preserve towards an imaginary power. In the luxurious idleness of an opulent city, their pride was nourished by the sense of their irresistible weight; nor was it possible to conceal from them, that the person of the sovereign, the authority of the senate, the public treasure, and the seat of empire, were all in their hands. To divert the Praetorian bands from these dangerous reflections, the firmest and best established princes were obliged to mix blandishments with commands, rewards with punishments, to flatter their pride, indulge their pleasures, connive at their irregularities, and to purchase their precarious faith by a liberal donative; which, since the elevation of Claudius, was enacted as a legal claim, on the accession of every new emperor."

For the hardest core history fans only

I loved all of it, but I wouldn't recommend it to anyone that I know. 126 hours of meandering through the Roman decline told by a man from 1787, having all of the prejudices you would expect, was for me a lot of fun but most people who are humans and have ears would likely rip them off half way through the work. But if your reading this review you probably fall into the group of people who enjoy this kind of thing, and in that case I would recommend it just for the satisfaction of beating this book! It's great, just do it.

Sometimes a slog, but what a journey

Some chapters were dryer than others, but overall an incredible listen, especially when you consider that it was written over 200 years ago!

After an overview of the time it begins in depth with Emperor Commodus and goes through the fall of the Eastern Empire to the Turks. That's over 1200 years! Of course it doesn't just look at the Roman Empire, but Gibbon also explains the sparks of areas around the empire that lead to flames within. If you don't mind listening for a long time (it took me about 4 months), this is definitely worth it.

My only gripe is that I didn't have any maps to help me visualize some more obscure areas being talked about (of course there's nothing to be done about that since it's an audiobook). The issue is easily remedied with a pause and Google search.

Examining a period of world (european) history (late antiquity throughout the middle ages) crucial to the understanding of western civilization, this book is a treasure. Edward Gibbon, drawing from various sources, most of them contemporary of the facts it exposes, traces the history of the Roman Empire in the west and in the east. Along the way, he discuss christianity, the Roman Catholic Church, the crusades, the beginning of the Muslim faith and the advent of the Ottoman Empire. The successive battles between the romans and the barbarian are explained in a way that one understands the facts that underline the formation of modern european states. The author is not shy in declining his views about the events, with renders the book even more fascinating. An enlightening reading!

OK, so I'm only about 20 hours, with 106 hours to go, but what a joy so far. Charlton Griffin's performance really brings the text alive. This is much more enjoyable to listen to than you might expect. The fact that Gibbon is unafraid to express his own opinion in just about every sentence he writes is part of what makes this fun. He was a phenomenal writer and Griffin is a phenomenal reader. If this peaks your interest at all, you should definitely give it a try.

the work itself is monumental and impressive. his arguments are clear and debatable. it took a long time to get through this, but it is worth it. anyone serious about history or the English language will certainly appreciate this product of the age of enlightenment.

Not for the faint of heart…

… But if you're crazy about history, or want to know more about the origins of modern Europe, the Middle East, and the entire Mediterranean region, this book is an extremely good read. It's monumentally boring at times, and of course mired in the past as any 18th century work must be, and enormously prejudiced at times, but for all those faults it is well written and well researched.

Not just a history of Rome but a beautiful piece of art and literature. Perfection!

Gibbon's entire masterpiece in the absolutely perfect voice for the work. Truly quite the deal.

A great historical and thorough introduction of not only Roman antiquity but of Christianity and Islam. Astonishing how similar modern history resembles the sinuous advances between cultures and conquerors of the time periods in this book.

A thing of beauty is a joy forever

What words to choose in order to praise this marvelous English language, the historical detail and the profound understanding of the "nature" of human kind? It is unbelievable that a non-fiction work that was written centuries ago can still keep so much of a fascination.

I thank thee, Edward Gibbon, for the the delight you have provided to me in the precious hours of paste time that I have spend with you.

A long but great audio book

I haven't noticed at first that the book is almost 250 years old which speaks to its value. One or two hours in I started wondering about some odd references to the present time and googled the book. I was quite astonished about the publication date.
In summary: I learned a great deal and was always entertained even when the author discusses rather dull theological questions.
The overall production quality is excellent. In part ten they missed to cut out a short coughing pause, but at a length of 120 hours this is excusable.