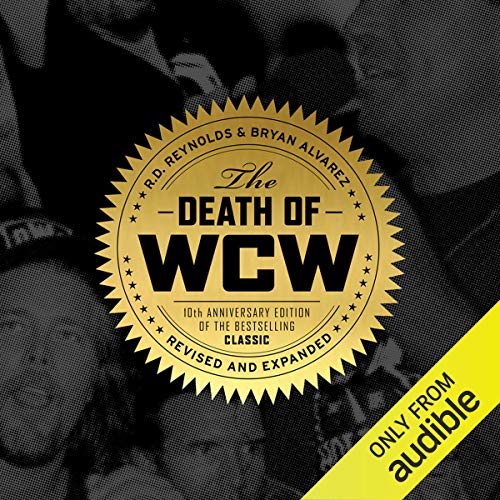 The Death of WCW

What went wrong with WCW?

In 1997, World Championship Wrestling was on top. It was the number-one pro wrestling company in the world, and the highest-rated show on cable television. Each week, fans tuned in to Monday Nitro, flocked to sold-out arenas, and carried home truckloads of WCW merchandise. Sting, Bill Goldberg, and the New World Order were household names. Superstars like Dennis Rodman and KISS jumped on the WCW bandwagon. It seemed the company could do no wrong.

But by 2001, however, everything had bottomed out. The company - having lost a whopping 95% of its audience - was sold for next to nothing to Vince McMahon and World Wrestling Entertainment. WCW was laid to rest.

How could the company lose its audience so quickly? Who was responsible for shows so horrible that fans fled in horror? What the hell happened to cause the death of one of the largest wrestling companies in the world? The Death of World Championship Wrestling is the first book to take listeners through a detailed dissection of WCW's downfall.

This book is 25% talking about wrestling matches, 70% trash talking and finger pointing, 4% sarcasm, and 1% “facts” most of which have nothing to do with WCW. Don’t waste you time or money.

I'm split on this review, but I think my headline captures it. You can tell the author/narrator is incredibly knowledgeable about the history of WCW. The amount of detail you get (down to weekly ratings) is fascincating and at times, almost too in-depth.

However, your rambling friend sometimes goes on tangents, and for a few minutes, you're completely confused as to what he's on about, before just as suddenly being right back on course. I'm sure a lot of this is due to trying to fit in the &quot;Lessons Not Learned&quot; sections from the book. But there is no distinction as to when these end, and when he's back to the narrative unless you're paying careful attention.

Additionally, the author often repeats the same information over and over. Paraphrasing from memory: &quot;Hard to believe Tank Abbott would join 3 Count someday&quot;. &quot;This is strange booking considering he would soon join 3 Count'. And then finally getting there in the narrative... &quot;You wouldn't believe who 3 Count revealed as their new member... Tank Abbott!&quot;

It's like each section was written on it's own and then mashed together without editing to clear out all the redundant mentions.

Overall, if you're a fan of WCW or pro wrestling in general, I still think this is a worthwhile listen, you'll just have to put up with your friend's rambling at times.

The full story of how you DO NOT do Pro Wrestling

Learn more about WCW, their struggle with WWF/WWE and how their rise and fall changed Pro Wrestling forever.
Narrated by co-author Bryan Alvarez from Wrestling Observer (famous for his MINUS FIVE STARS quote used in Botchamania), learn in detail how the habit of misusing young talent, collusion with the bookers, and blowing money away at things not wrestling resulted in their bankruptcy and being bought out by WWE. Also added are moments were in present day even WWE seems to have made the same mistakes, and a certain infamous promotion, TNA Impact Wrestling, died the same death by the same reasons and by the same integral people responsible for WCW's.
Dry at first, the wit and sarcasm Bryan is known for and has made many laughed during The Bryan and Vinny Show podcast comes into his narration when the company's decisions are at their worst and dumbest. Recommened to any interested in wrestling, even if one only simply watches the previously mentioned famous Internet video series Botchamania. Of course, a lot of WCW's most famous botches are featured in Botchamania for those who still don't believe in these stories.

This book is terrible just like the TV show...

Dont waste your time, money, or audible credit on a summary of a TV show that you can get for free on YouTube. You could also watch the entire run of the TV show on the WWE network which would be more entertaining than listening to this guy for 12hrs. This is just a rant on the authors opinion that WCW sucked and therefore failed. There are really no interviews or direct quotes from many of the wrestlers whom are still employed by either WWE or another TV show such as New Japan, TNA or AEW. The 1990s and early 2000s were the golden age of trash TV that's what made this show great. It also he makes it sound like its Hulk Hogan's fault the show went under. The "Hulkster" is like "Pikachu" is to Pokémon he's the face of wrestling and one of the most recognizable characters in pop culture people will love his wrestling performances whether or not they were 1 minute long or 1hr long people are only tuning in just to see him. Nobody cares about rookies unless they are dedicated wrestling fans. Lastly this book uses a lot of terminology that most people who are casual fans who only tune-in once a week or haven't watched wrestling since 1989 and the days of Tube TV wont understand. Such as "Heel-Turn", "Baby Face", or "K-Fabe" and doesn't explain any of it. Finally, WCW died because Ted Turner sold the program to Vince McMahon in 2001. The rest of this book id just a big 11hr rant and summary of every episode from 1988 - 2001. It also has 2 forwards each one he dedicates the book to different individuals in each forward which takes up the other one hour. I expected an ESPN 30-30 written well and explained more in depth story about how the history of Ted Turners entertainment wrestling contrasted with popular culture and trash television of the 1990's. but all I got was a "Super-Fan" critique and summary of every episode of the 13yr show. WCW was a great show. The author probably thought Wrestling, The Easter Bunny and Santa Clause were real until he was 35 and wrote this book after his mom finally told him those things happen to be fake. This book is really bad and hard to get through.

The Best Wrestling Book I've Ever Listened To

As someone who lived through the Monday night wars as it's called and being such a huge fan of the WCW company instead of the WWF (as it was known at that time) this book is perfection in literally every way. It told me things that even I didn't know and I like to consider myself one of the biggest pro wrestling nerds on the planet. I'm not sure why it took me so long to finally get to this book as it's over a decade old but I'm very glad I finally did.

It's written brilliantly giving you constant information on a company that had so much history and things that could be said about it. It goes from the highs to the lows and lets you in on things that normally us fans (especially at the time this originally released) wouldn't be in on. All the backstage issues and business dealings that happened, how the snowball formed, and how eventually nothing could stop it from finally dying.

I'd recommend this book to any wrestling fan but it hits home even more to fans who grew up watching WCW as you'll know some of the things talked about all too well. I couldn't praise this enough. It's definitely in that must read/listen to catagory of books if you're a wrestling fan. It's a nostalgia ride hearing about some of the things talked about and you remember the good times you had when you watched the shows. That being said it also takes you down and makes you absolutely baffled at how the company even lasted as long as it did with the stuff that was happening backstage.

In conclusion there's nothing I can say that will do this credit. Many more before me have written reviews on this book. Some who know a lot more about literature than I. But as a wrestling fan this is simply the best book about professional wrestling I've ever had the pleasure of listening to. Thank you to Bryan Alvarez, Big Money Dave Meltzer, and R.D. Reynolds for this trip down the rabbit hole of the company that started my love for this sport.

I look forward to eventually reading The Death of TNA/GFW/iMPACT Wrestling whenever that day finally comes.

I wasted a credit on this

I gave this book a fair shake. It's hot garbage. Don't waste your time

the story was fantastic in an outlandish entertaining way, but was filled with a ton of misinformation and falsehoods from anonymous sources. Alvarez's performance was great and all but the true WCW book is Nitro by Guy Evans in which he actually interviewed high ranking executives that weren't anonymous and were actually there and knew what was going on behind the scenes. This book was nothing more than the creator of wrestlecrap.com (Reynolds) and Alvarez from figure weekly shitting on Eric Bischoff and those of his ilk that they dislike.

This book has that feeling that fan sitting on a couch watching WCW and talked to a couple of wrestlers then wrote a book. No information from key people. The narrator voice sounds like a radio jock. There are no details or back story of WCW. Buy the WCW Nitro book it’s much better, lot of details on the back story of WCW, Information from key people including those connected directly with CNN.

Nothing but a collection of dirt sheet stories many of which are not accurate. If I HAD to say something nice... At least the stories are in chronological order.